The US card payment system involves a series of middlemen taking a cut. Digital systems, like those used in China and Kenya, could threaten banks and other players.

Payments systems vary across the globe, from cash-based economies to those driven by credit. The way consumers pay in the US, for example, might seem obsolete to consumers in other countries.

In Kenya, anyone with a mobile phone — smartphone or not — can use M-Pesa to send money, pay for things, and access credit. The service is used by almost all adults in the country.

More importantly, users don’t need a credit card, bank account, credit history, or minimum balance to open an M-Pesa account. Instead, they provide cash to any one of thousands of independent cashiers to top up their mobile wallets. This effectively circumvents Kenya’s limited banking infrastructure — a boon for financial inclusion and commerce.

In contrast, mobile payments in the US have yet to catch on.

This isn’t due to a lack of mobile devices (according to the World Bank, the US had 123 mobile cell subscriptions per 100 people in 2016), nor is it due to a lack of offerings — a study in the same year found that 88% of US consumers were aware of Google Pay, but only 14% had tried it.

Rather, banks and payments providers have established a system that’s worked — and is still working. Consumers like credit card perks, merchants have bought in, and banks and payments players are happy to provide the infrastructure in exchange for a piece of the pie. 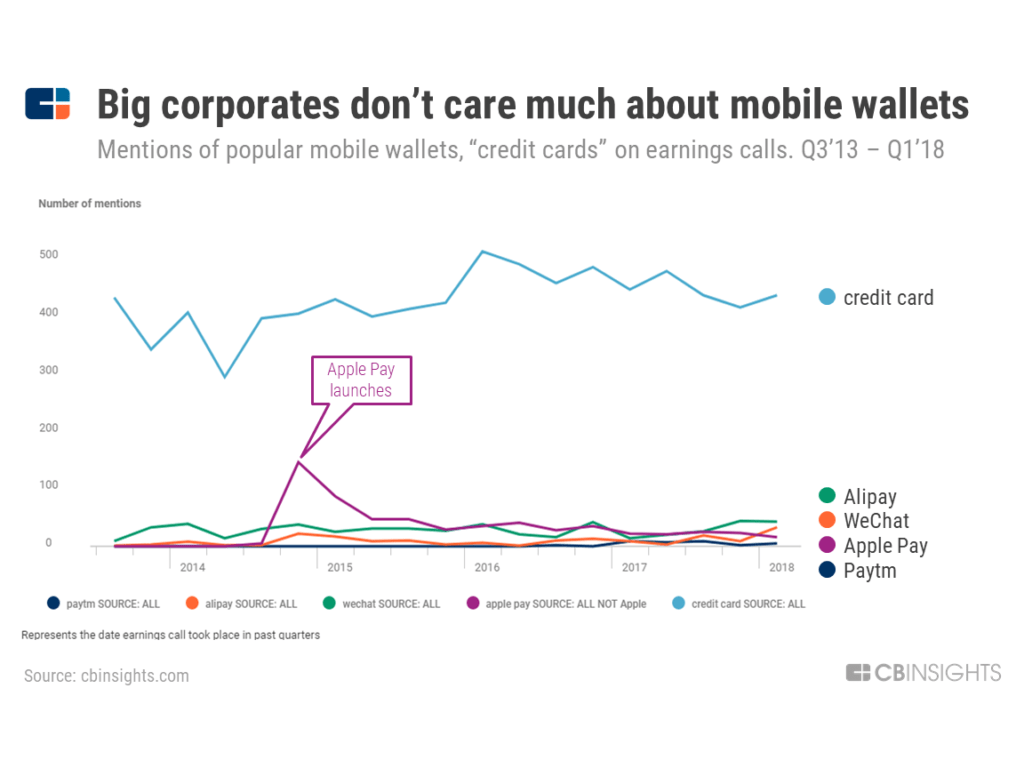 However, the rise of M-Pesa and other payments services in developing countries highlights a marked shift: consumers can access credit and pay for things without banks and card networks.

M-Pesa is owned by Kenya’s largest telecom player, Safaricom. In China, Alipay and WeChat Pay are pieces of e-commerce and social players, respectively.

In this way, disruptors are rethinking the traditional payments value chain, or how transactions are processed between consumers, merchants, and banks. Going forward, US payments players have reason for concern, as consumers and merchants could be wooed by technology-first options with fewer middlemen.

In this research briefing, we’ll discuss:

In the United States, 93% of consumers have some sort of bank account. Virtually all US private sector wage earners receive wages into bank accounts, according to the Global Findex database, which are insured by the FDIC and offer an easy way to earn interest.

Users of the traditional financial system can also build credit and access credit instruments, like credit cards. Banks are happy to offer credit cards to their customers — they’re highly profitable, and consumers like their convenience, among other benefits.

The credit card system involves a number of different parties that allow consumers to pay using a line of credit. Banks, payment gateways, payment processors, and card networks (among others) establish a web of trust between customers and merchants. For their services, these middlemen charge fees. 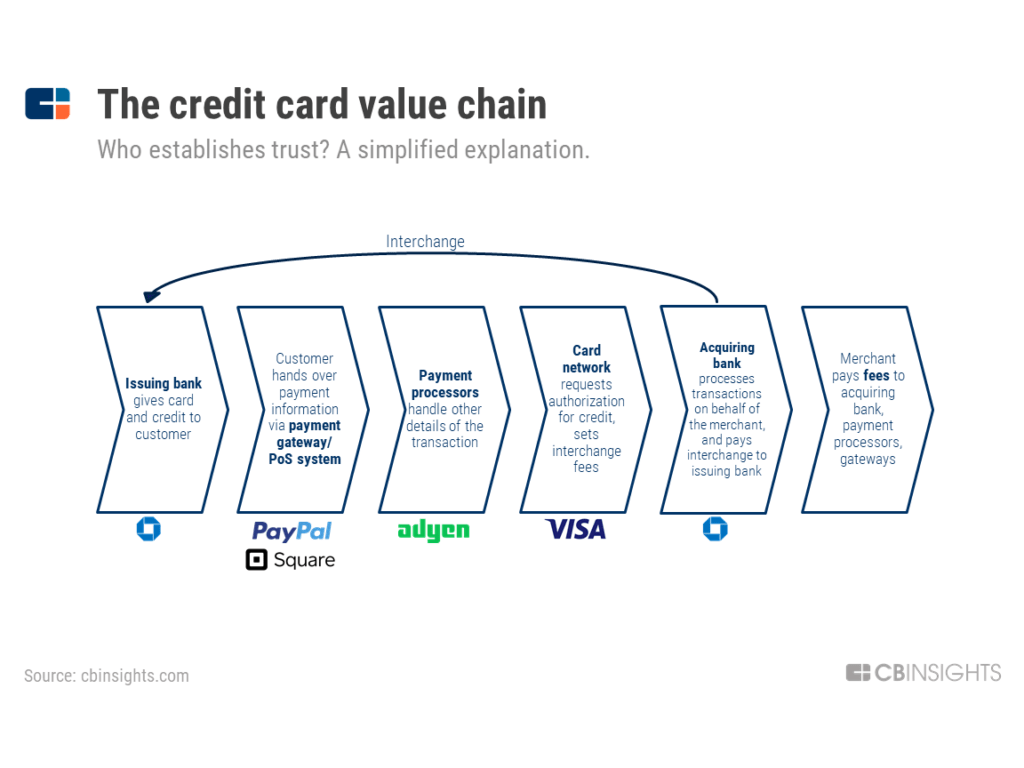 The above begs the question: why are credit cards so widely used if merchants have to pay so much?

The answer is that banks — and their customers — love them. In order to incentivize customers to use credit cards, issuing banks offer a slew of rewards programs, consumer protection services, and other perks.

Perks attract consumers to buy on credit, and banks profit from interchange fees. US merchants pay about $90B annually to accept cards and mobile payments (according to the Nilson Report), most of which goes to the issuing banks.

At the same time, merchants don’t (and often aren’t allowed to) set different prices for different cards. Instead, the merchant raises prices across the board to account for the highest interchange fees.

Compare the above payments web to services like Alipay and WeChat, which reign supreme in China. Nearly 600M Chinese users actively use these services for mobile payments.

Alipay is the brainchild of Alibaba, which is one of China’s largest e-commerce marketplaces. Alipay solves for digital trust by acting as an escrow agent. Alipay ensures that the customer has the means to pay the merchant, and that the merchant renders a satisfactory product or service.

WeChat is also an escrow agent, but approaches the same problem from a different angle. Offered by Tencent, one of China’s largest social and messaging networks, WeChat Pay was first launched to enable peer-to-peer payments among its hundreds of millions of users. Now, WeChat has expanded into e-commerce, hosting digital shops within its app where users can pay via its native wallet. 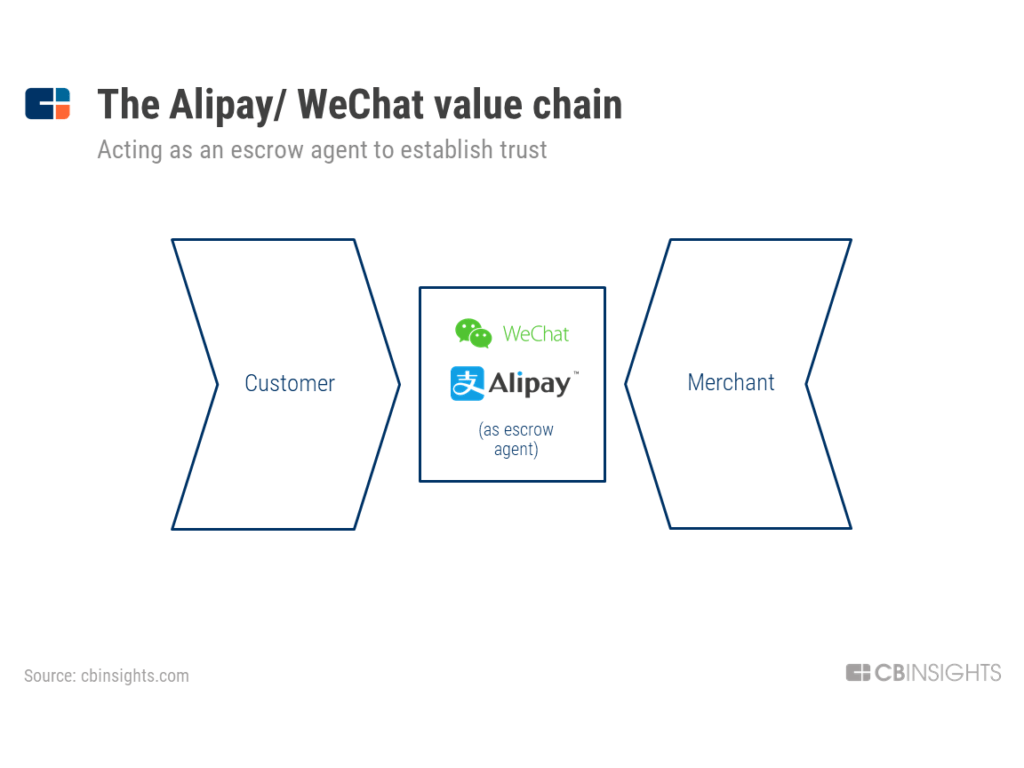 It’s also important to note that Alipay and WeChat look quite different from US-facing counterparts, like Apple Pay. Users in China don’t need credit or debit cards to access Alipay and WeChat. Apple Pay, on the other hand, merely digitizes credit and debit cards to pay via mobile. While there’s certainly a convenience factor at play, Apple Pay doesn’t fundamentally change the card value chain, and is another mouth that merchants have to feed.

The road ahead: Why banks and card networks should pay attention

By acting as escrow agents, Alipay and WeChat cut out many of the middlemen that US merchants have grown accustomed to. Mobile payments in China make up a $16T market, and users often pay very small transaction fees — sometimes no fees at all.

As a result of holding billions of dollars, the two have added credit offerings, money-market funds that earn interest for users, and other pieces of the financial stack. Alipay, for example, offers credit services for consumers like Ant Credit Pay and Ant Cash Now.

In addition to their first lines of business in e-commerce and social, Alipay and WeChat are now diversified financial institutions. The two internet giants control the payments value chain in China, but have leaner infrastructure needs and much lower fees than traditional banks or card networks.

It’s not too difficult to imagine a similar scenario playing out in the US. With their massive user bases, Amazon and Facebook could feasibly compete with big US payments players by offering mobile wallets and other financial products.

Amazon has launched Amazon Pay in India to compete with the popular Paytm mobile wallet, and Amazon Cash in Mexico, which enables e-commerce by bypassing credit cards and checking accounts. Alipay and WeChat are also starting to make inroads into the US, launching in certain townships, New York City cabs, and at hotels popular with Chinese tourists.

Payments players, then, face competition from all angles. Traditional banks, card networks, gateways, and processors will all likely have to adapt as the payments system begins to shift.