Research Brief
3472
As acquirers circle, Honest Co. looks weaker than it did following a raise at $1.6B a year ago. We used our valuation and performance data to dig in.

On the heels of Unilever’s $1B+ acquisition of subscription-razor business Dollar Shave Club, a number of CPG giants are reportedly exploring a possible acquisition of The Honest Company, the family- and eco-friendly consumer-products brand.

A $1B acquisition of The Honest Company would represent a significant drop from its current $1.6B+ valuation (dating to its Series D in 2015). Other than the acquisition rumors, the company has also been in the public eye following media reports and lawsuits for using ingredients that were not on its labels and/or that it had pledged to avoid.

It has also now been over 420 days since the company’s last funding round.

Given the media and acquirer interest in The Honest Company, we used CB Insights’ valuation data to understand trends in the company’s valuation, the terms under which investors have backed the company, and how it has been performing relative to competitors.

The Honest Company has seen a rapid rise in valuation, beginning with its nearly $90M valuation during its Series A all the way to its $1.64B valuation at the time of its August 2015 Series D, a jump of more than 18x in less than 4 years. The company raised one round annually since 2012, and had a valuation increase of 100% or more each year.

A sale for $1B would be a valuation discount of 39% from the valuation at which The Honest Company raised in their last financing. It should be emphasized, however, that the $1B price is from a media leak, and an actual acquisition could come in at a different price, or there could be no acquisition at all. The company has said it is also considering an IPO. 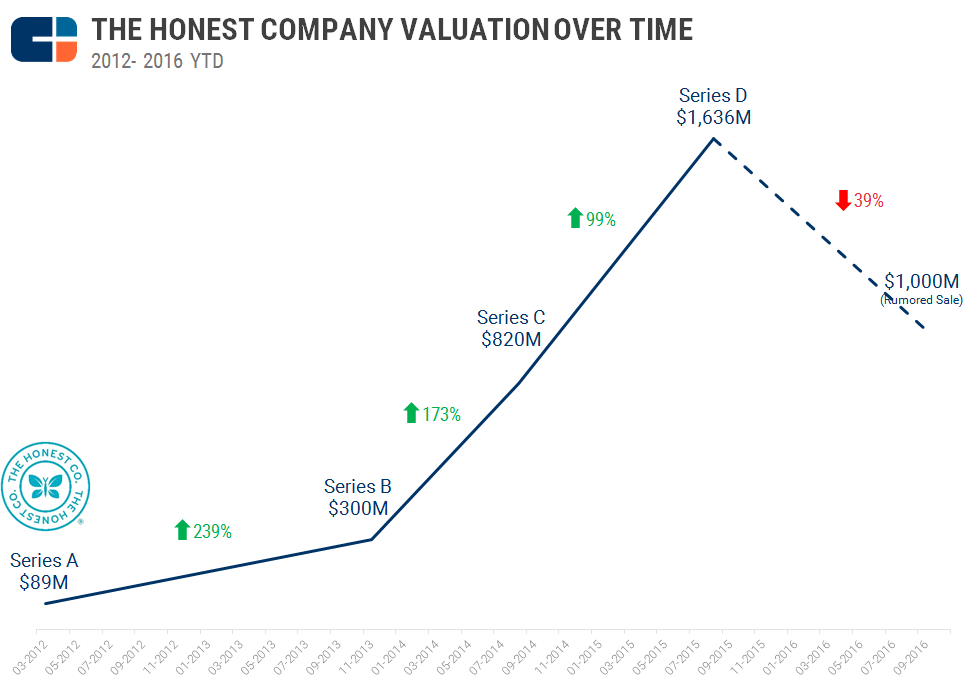 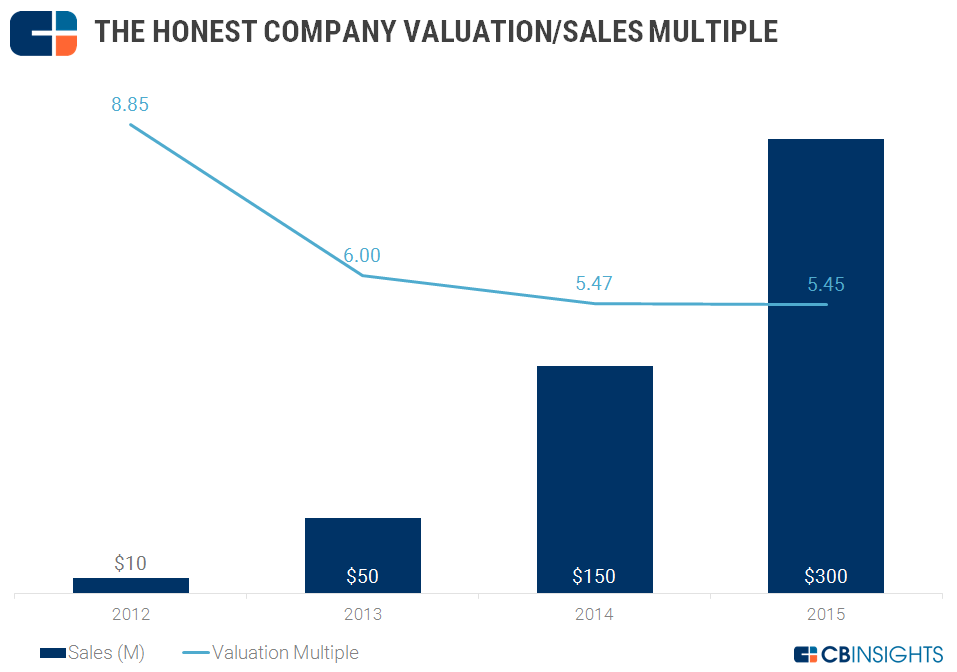 For reference, Unilever paid approximately 5x expected revenue for Dollar Shave Club, and ~3.25x 2015 revenue for Seventh Generation. That would make the valuation multiple for The Honest Company at $1B a reasonable multiple — 3.3x sales — based on past acquisitions. Also important to note is that Dollar Shave Club was strategic for its online distribution and customer access thanks to its subscription model, compared to Seventh Generation and The Honest Company, which are much more product-focused companies. Public market CPG companies trade for slightly lower multiples compared to private companies, which is to be expected for more mature companies. 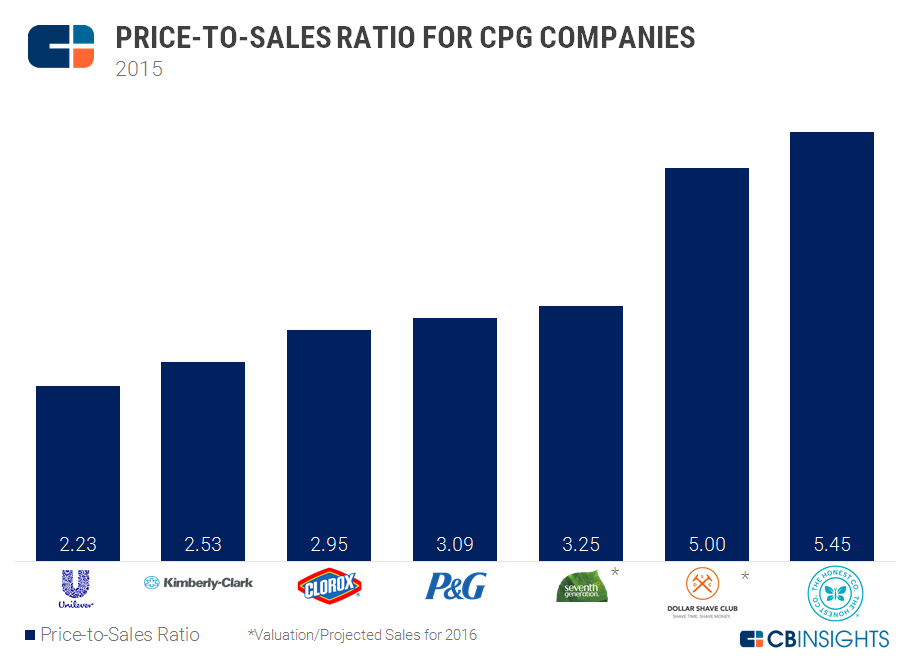 Valuation multiple is one dimension to consider, but revenue growth is another. Using Dollar Shave Club for comparison, we see that The Honest Company outpaced Dollar Shave Club in both absolute numbers and percentage growth in 2013. In 2014 and 2015, both companies saw growth slow. In 2015, The Honest Company grew sales at 100% over the previous year.

That was slower than DSC, which grew sales 130%. 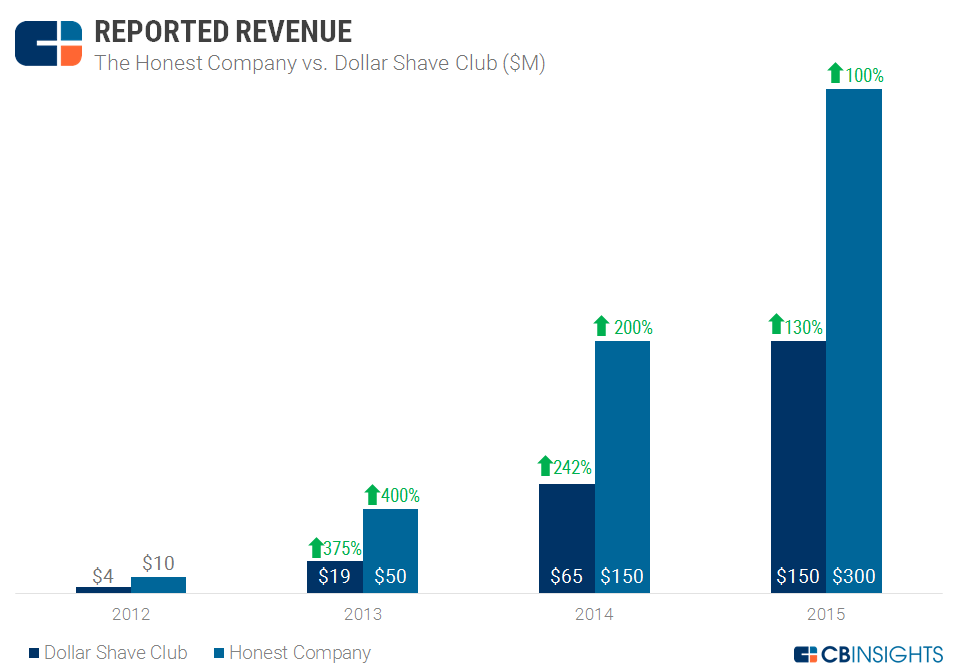 Institutional Venture Partners has been involved in every single round. The $100M Series D mega-round was financed by deeper-pocketed mutual funds and asset managers including Wellington Management, Fidelity, and AllianceBernstein. 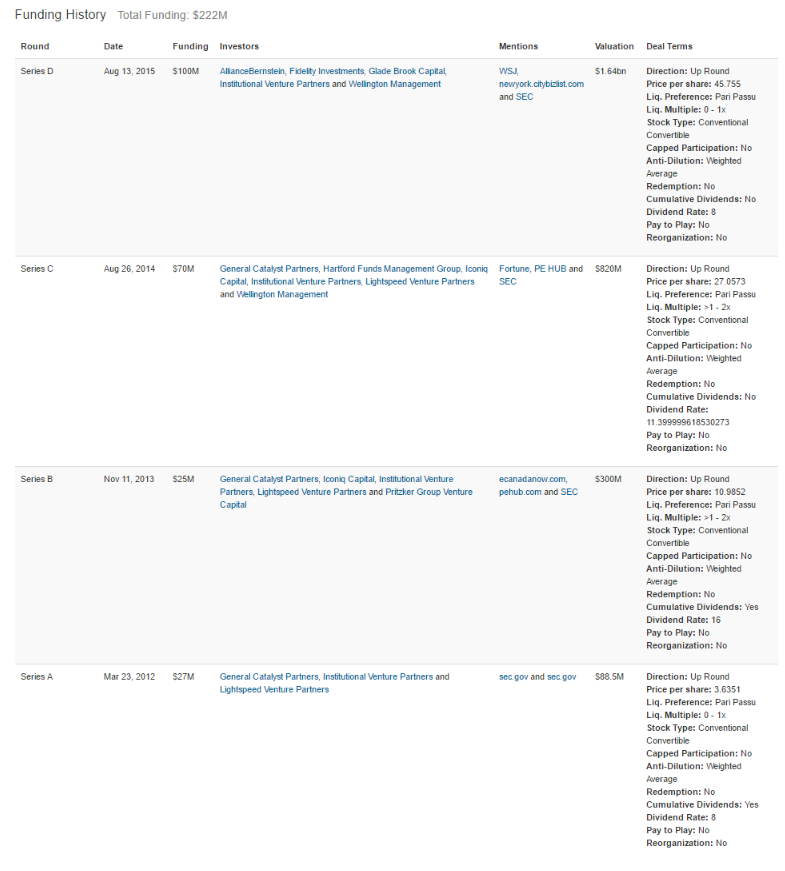 What’s interesting to note is that the liquidation multiple increased for the Series B and C deals to greater than 1 (but less than 2x), but returns to the 0-1x multiple range when the mutual funds and asset managers arrive.

Greater liquidation multiples indicate more investor-friendly terms, while lower multiples are considered more founder-friendly. (For example, in an unfavorable exit, greater multiples can mean that investors in that round are guaranteed for e.g. 2x what the price of their shares were, paid out ahead of any proceeds going to common shareholders.)

In this case, it looks like The Honest Company was pushed to give investors friendlier terms in 2013 and 2014 but was able to shift back to friendlier terms for itself as the deeper-pocketed mutual funds and asset managers piled in for the August 2015 Series D. It’s also interesting to note that rounds with higher dividend rates are more friendly to investors in those rounds, and the dividend rate decreases in the last two rounds (returning to 8% in the D round with mutual fund investors, after rising as high as 16% in the B round).

Other metrics show that that The Honest Company is losing traction.

When we look at The Honest Company news mentions over time in our Trends tool, we see a few notable spikes related to the lawsuits filed against the company based on product mislabeling. These lawsuits happened very close to each other, focusing on products including its sunscreen, detergent, and baby food.

In fact, the company recently announced it would reformulate products allegedly containing one of those ingredients, sodium lauryl sulfate.

The spike at the end of the chart is due to that announcement in part but is more significantly attributed to rumors of the company’s sale to Unilever. 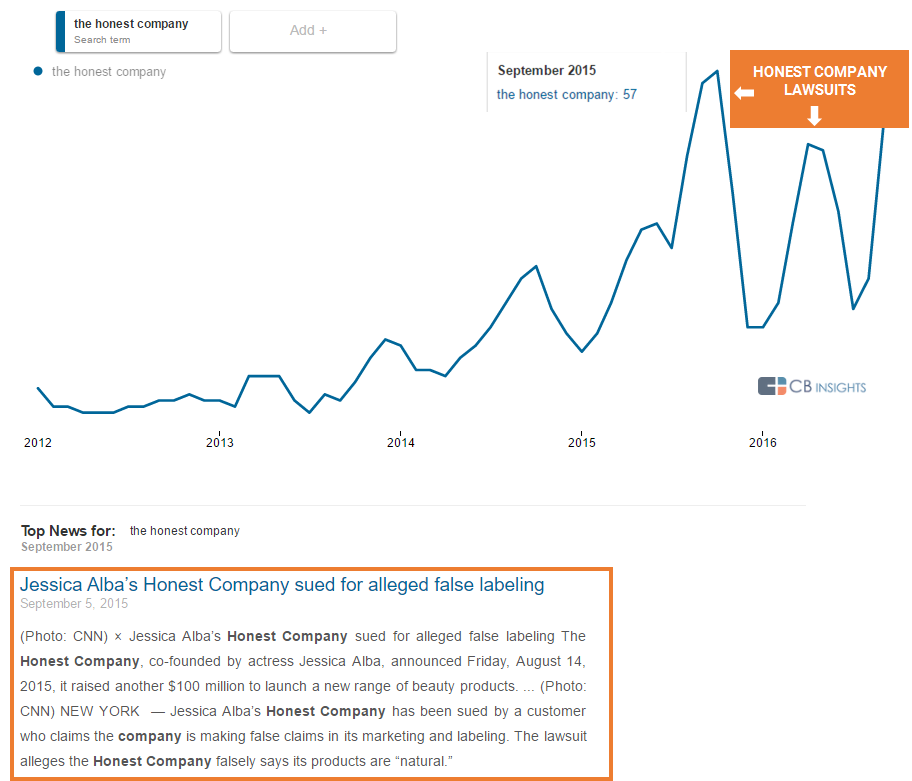 As the lawsuits occurred, The Honest Company also saw web traffic decrease. When we look at the web ranking over time, we see that the number of unique visitors (Reach Per Million) to the company’s page has been falling in 2016.

The hiring pace of the company also slowed down significantly in the last few months after an aggressive ramp up starting in 2016. We’ve seen a slight uptick recently, but not to the same levels as March or April.

CPG as a whole has seen stagnation in deals, and a noticeable pullback in funding in 2016. The Honest Company is facing a more difficult funding environment for late-stage follow-on funding, given the shift in investor sentiment. 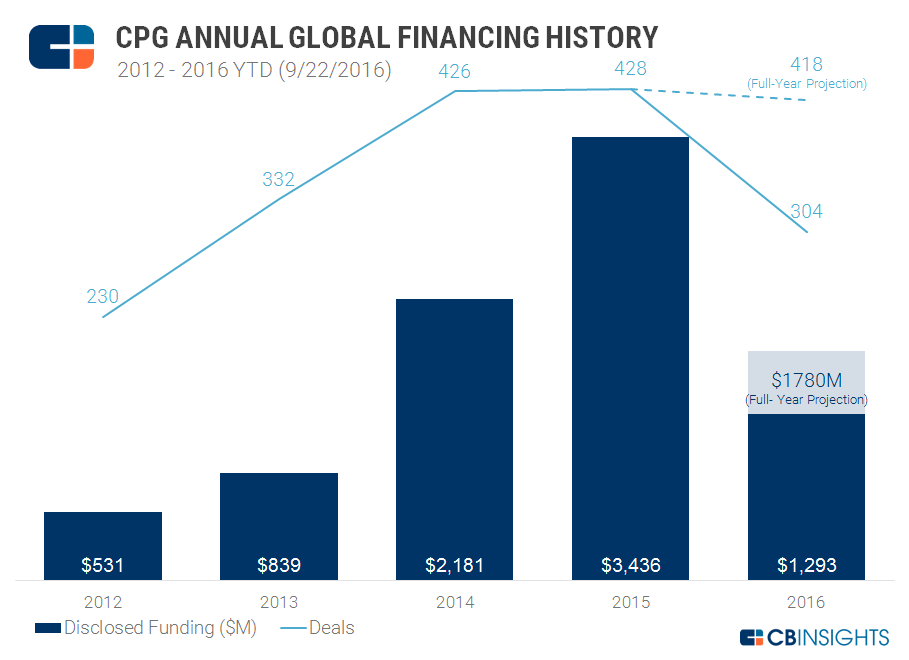 All-in-all the metrics — web traffic, jobs data, time since last round, and funding trends to private CPG companies — show The Honest Company in a weaker position today than it was at the start of 2015, which could be the reasoning for the discounted $1B valuation reportedly under discussion during talks with Unilever. For The Honest Company, which is focused on building a transparent and ecologically friendly brand, the legal and media scrutiny was clearly damaging. Macro factors around funding into CPG companies have also turned against the company.

Series B and C investors in particular may still be poised to do well in a “down exit” for $1B (common stock holders are likely a different story). While Unilever may no longer be pursuing the deal thanks to their acquisition of Seventh Generation, there are plenty of other CPG corporates on the hunt for acquisition targets in the private markets.

Want more data like this on other CPG companies? Check out our private market database below.