Research Brief
2578
The CB Insights database helped us spot hidden trends where correlations are simply too strong to be coincidence.

In the words of Albert Einstein, “coincidence is God’s way of remaining anonymous.”

At CB Insights, we use data to spot trends across venture capital, startups, and emerging industries. Sometimes, we spot correlations that almost seem to connect the dots between unrelated trends in investing, not to mention politics, society, and sports.

With a hat-tip to Tyler Vigen of “spurious correlations” fame, and just for fun, we decided to put together charts with some questionable correlations and conclusions. Here they are:

1) Deals to cannabis startups fuel a boom in food-delivery 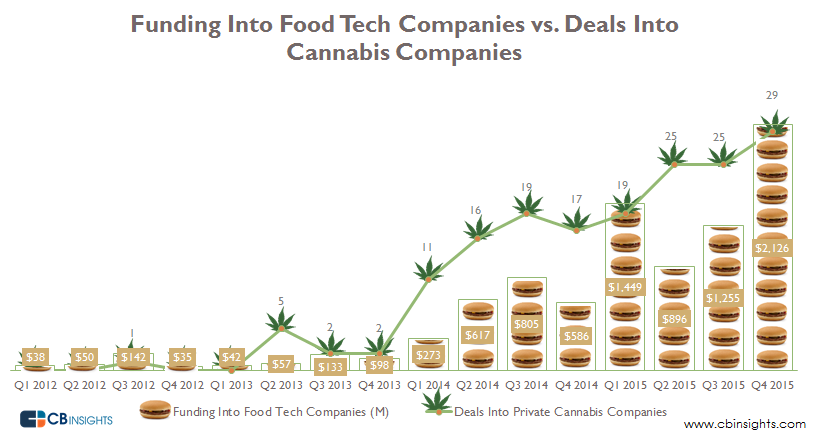 As we’ve highlighted before, activity into both cannabis startups and food tech, which includes on-demand food and grocery delivery, has been steadily increasing each quarter. However, it’s interesting to note that the two trend lines follow a suspiciously similar path, and even start accelerating in the same quarter (Q1’14). The rush into the cannabis economy has clearly triggered a demand for “munchies.” This can lead to opportunities in what might be termed “synergistic investing,” as in the case of Slow Ventures, which is an investor in both on-demand weed delivery service Eaze, as well as food tech companies Bento and Din.

It’s clear from this chart what happened here. After seeing “Her”, investors saw the promise of artificial intelligence and a romantic future for machine-human companionship in which AIs develop into entities we can have real feelings for. This led to a surge in funding, but it was short-lived due to the release of “Ex-Machina,” which painted a much darker future for AI, where intelligent robots use our emotions and needs to manipulate us (and eventually hack us to pieces). Understandably, funding into the space declined in 2015.

3) Donald Trump is fueling an investor rush into safer Canada 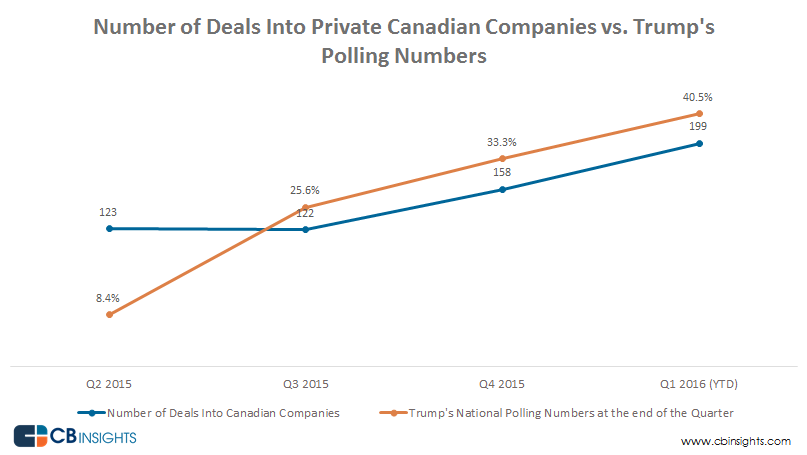 Investors have realized the severity of the political situation in the United States, which The Economist has described as one of the main risks facing the global economy in 2016. As a result, financing deals to private Canadian companies have increased in parallel to Trump’s national polling numbers, as tracked by FiveThirtyEight.

In the chart above, it’s possible to see the exact moment in Q3’15 when investors realize a Trump presidency is an actual possibility, and then aggressively increase their investment pace in the safe haven of Canada. Some Canadian companies that received funding recently include Hykso, a wearable sensor for boxing (for the expat US population that may need to relieve aggression); Cyclone Manufacturing which manufactures parts for the aerospace industry (to help those wanting to get away from the US as fast as possible), and Nilex which among other things, provides materials for building walls (an activity which will significantly increase in a Trump presidency). 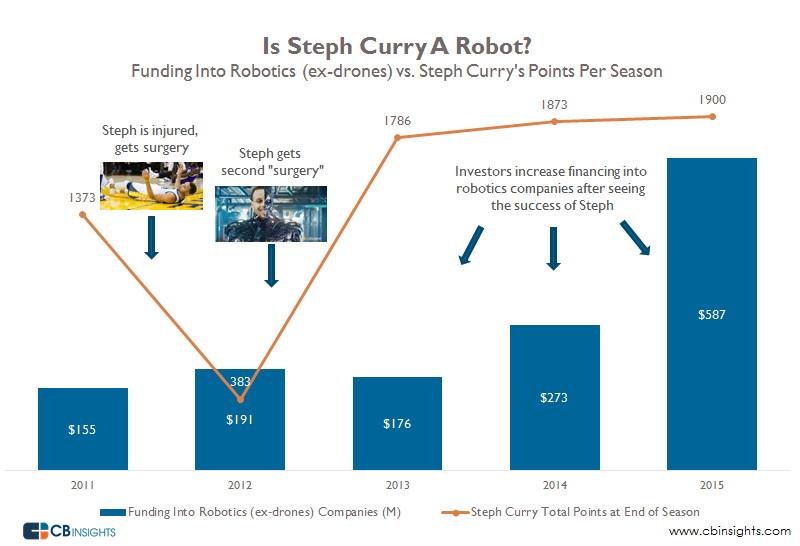 As Steph Curry continues to reign in the NBA this season and rain three-pointers on opponents,  many have been wondering how it’s possible that Curry, who was injury-ridden just a few years ago, has managed to become such a shining star in the league? We believe it’s because Steph Curry is actually a robot. After getting his second surgery in his injury-ridden 2011-2012 season, Curry came back much stronger than before, netting 1786 points in the next season, according to BasketballReference.com. The explanation is clear, he is no longer fully human. As savvy investors spotted this fact and assessed the success of the “Steph-bot”, they continued to pour money into other robotics companies, hoping for another outcome similar to Steph.

*Disclaimer, in case it’s not obvious, neither the correlations or conclusions are not meant to be taken seriously.

While the conclusions have been stretched, the data behind these posts is real. If you want to see where we got the private market data for these charts, check out our database below.