Non-VC investors have plowed into startup investing in the last few years. Specifically, corporates, hedge funds, and mutual funds have backed many of the mega-financings to tech startups, helping buoy their number in 2015 to more than 180, compared to 104 the year before.

Crossover investors — entities like mutual funds and hedge funds that normally focus on the public markets — have played an increasingly prominent role in 2014 and 2015, accounting for more than a fifth of participations in each year. Corporates had a strong year in 2015, seeing a peak of 20% share of participations in $100M+ rounds. 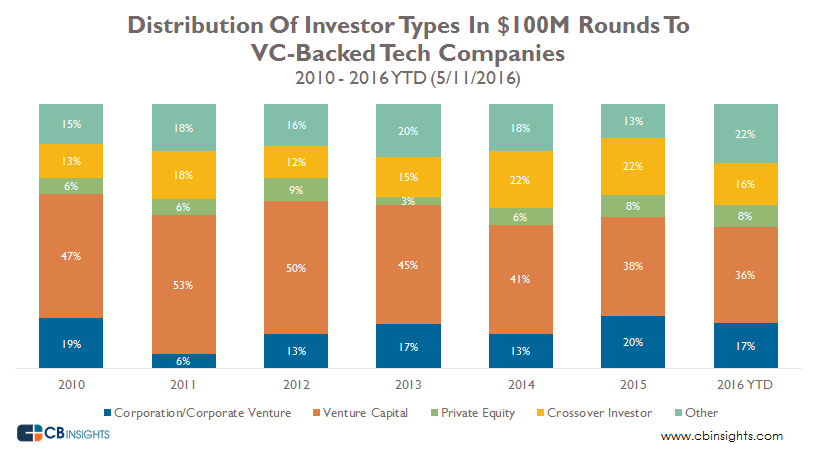 The “other” category in the chart above includes sovereign wealth funds, family offices, and other non-VC investors that can’t be classified as corporates, private equity, or crossovers.

The most active participants in $100M+ rounds into tech companies are a mix of crossover investors, VCs, and others. Tiger Global topped the list participating in more than 40 $100M+ deals since 2010, followed by DST Global which was the only other investor with more than 30 $100M+ deals, having invested in companies like Wish, Slack and Olacabs. Accel Partners and Andreessen Horowitz were the top VC participants in mega-rounds, with 28 a piece since 2010.

Want more data on megarounds or investors? Check out our private market database or sign up below.