Research Brief
1683
In the U.S., Tiger Global and T. Rowe Price are leading the charge among hedge funds and mutual funds investing in tech startups. Here's how 2014 spiked.

Last January, we identified that hedge fund and mutual fund managers were increasingly competing for and winning later-stage deals in the venture investing universe. And 2014 saw that activity spike, as asset managers jumped into companies including AirBnB, Cloudera, Dropbox and Uber among dozens of others.

These asset management firms have become among the most active (late-stage) investors in the billion-dollar club and frequent drivers of the largest financing deals in tech today.

But while the boom in hedge fund and mutual fund tech investing is readily noticeable, we wanted to use CB Insights data to highlight just how busy the funds have become and who among the batch were more active than the rest. The data below.

The chart below shows the investment deal trends of five mutual funds – BlackRock, Fidelity Investments, Janus Capital, T. Rowe Price, and Wellington Management – into U.S. VC-backed tech companies over the last four years. Outside of Janus, 2014 stands out as the largest year for each of the mutual funds investors who completed between 6-16 U.S. deals each.

Notably, T. Rowe Price increased its private tech deals into venture-backed startups by 2x in 2014. And after no U.S. tech deals in 2013, Wellington Management jumped into 12 deals including a $70.9M investment into real estate tech platform Redfin as well as a $40M round into Boston-based cybersecurity company Veracode, which recently disclosed IPO plans. 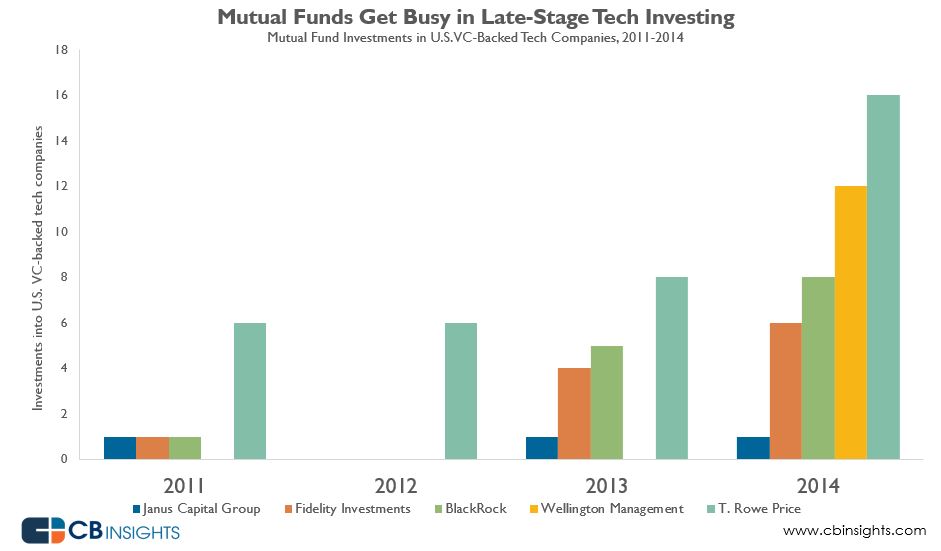 Hedge funds also became more active in 2014 but not to the same degree. As the chart below highlights, Tiger Global Management far outpaced hedge fund investors in U.S. VC-backed tech companies with over 25 investments over the 12 month period including Quora, Credit Karma, Actifio and Thumbtack.

Outside of Tiger though, hedge funds were more tempered in deal pace. Dragoneer, a San Francisco-based long-only, growth-oriented public and private investor, was second most active among the batch of hedge funds counting notable investments including Instacart, AirBnB and Wealthfront. Coatue Management, which exited both Lending Club and Box in 2014, did not see an uptick in deals on a year-over-year basis.

A mix of traditional VC money coupled with corporate VCs, hedge funds, private equity investors and even sovereign wealth funds lifted 2014 funding levels to the highs seen during the dot com boom. With VCs like Benchmark’s Bill Gurley calling out ‘FOMO’ in the frothy late-stage market today, will 2015 continue the trend of mutual fund and hedge fund tech startup dealmaking? 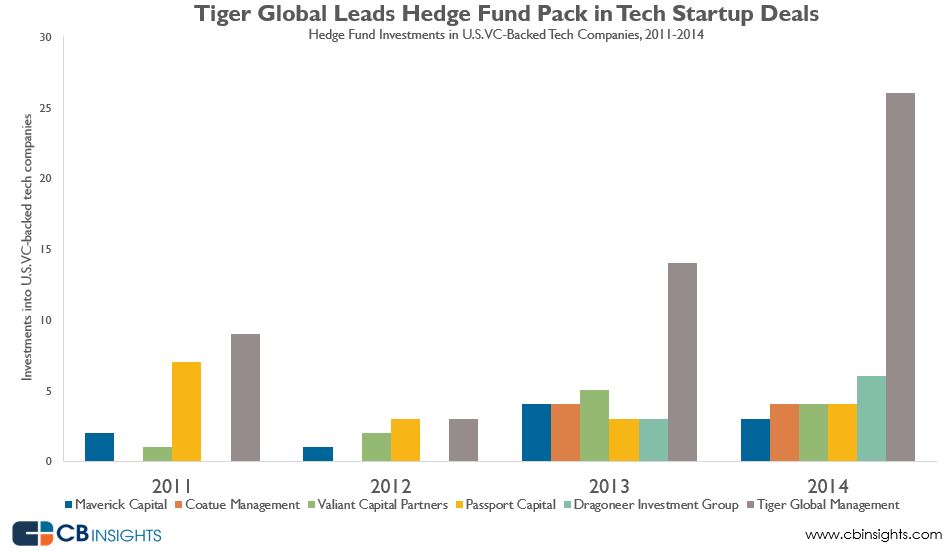