Plant-based beauty brand Yes To raised the largest round in Q2'17, as consumers seek natural ingredients across the CPG industry.

Deals to beauty and grooming startups have grown steadily since 2012, and are racing toward an all-time high in 2017. Early-stage deals are on the rise, as new growth in plant-based ingredients and customized products drives momentum in the industry.

Despite deal growth, funding totals have been slipping since 2014 — though this is largely due to momentum among newer startups, which are seeing an increasing number of smaller, early-stage deals.

This year’s largest deal to date took place in Q2, and embodied the industry-wide trend toward plant-based ingredients. San Francisco-based Yes To, which sells skin and hair products based on fruits and vegetables, raised a $56M Series B in June from Viking Global Investors. The deal boosted Yes To’s total funding to $73.5M, making it one of the ten most well-funded private beauty companies.

This year’s second-largest deal to date was a $17.2 private equity investment to Rush, a UK-based salon chain. London-based PE firm LDC led the round. Function of Beauty, a personalized shampoo and conditioner startup, ranked third with a $9.5M Series A in March. Function of Beauty’s focus on direct-to-consumer and customized products (the startup promises 12 billion possible combinations for its products, which are blended based on users’ online hair assessments) show how beauty startups can use new technologies to gain momentum. 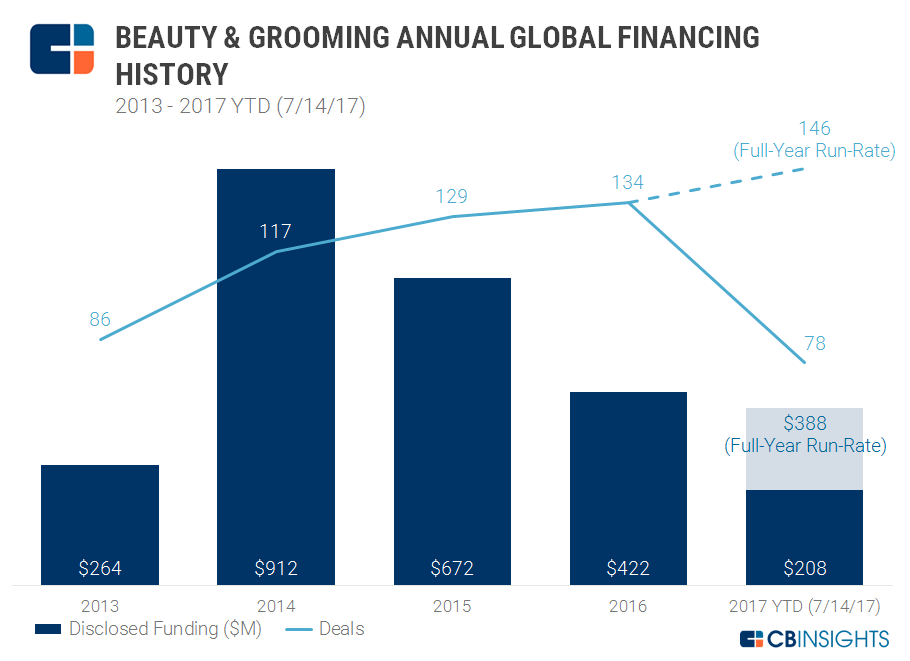 Startups working on beauty & personal care have the potential to upend the industry. Look for Beauty & Personal Care in the Collections tab.

From a quarterly perspective, deals fell slightly in Q2’17 to 35, down from 38 the prior quarter. Yes To raised the quarter’s largest round, described above, followed by nail salon chain MiniLuxe, which raised $9M from Cue Ball Capital and The Horowitz Group. Tied for third, Brazilian direct sales essential oils startup Aloha Oils raised a $6M angel round, and UAE-based beauty booking platform Shedul raised a $6M Series A.

Boosted by Yes To’s $56M raise, funding rose slightly in Q2 to $102M, up from $100M in Q1. The largest deal in Q1 was much smaller — a $9.5M Series A to Function of Beauty (mentioned above), with participation from GGV Capital and Y Combinator. Beauty-focused digital media company Beautycon Media raised the second largest deal in Q1’17, a $9M Series A from A+E Networks, L’Oreal, Hearst Corporation, and others. Probiotic skincare startup Tula ranked third with a $8.5M Series A from private equity firm L Catterton. 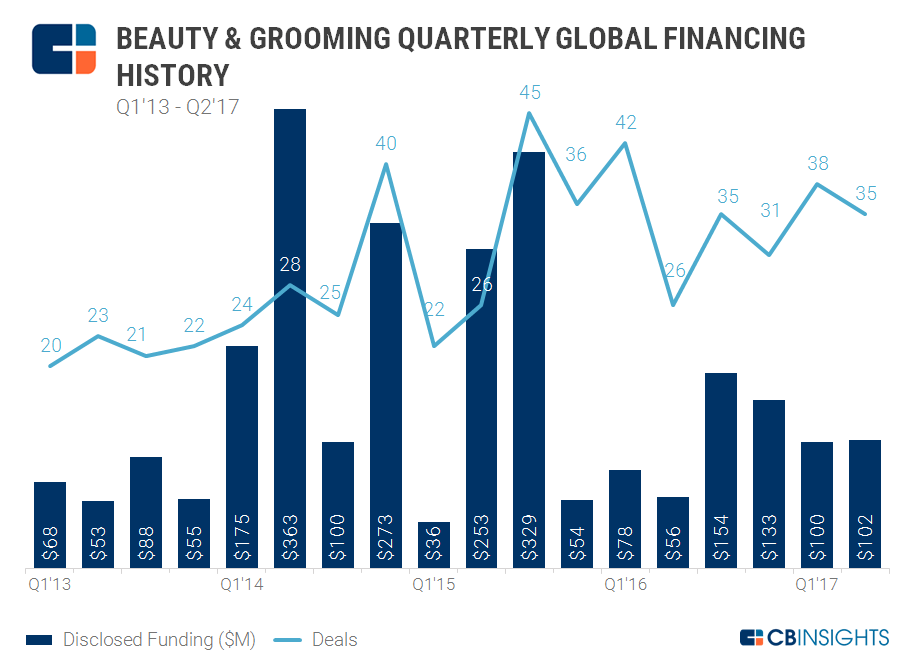