With growth in healthcare IPOs, who are healthcare’s top institutional investors? Using our Investor Mosaic predictive algorithms, which consider factors such as past performance, network strength (who they know), selection aptitude and brand among other factors, we wanted to offer a statistical assessment.

It is worth noting that due to this criteria of 50%+ of deals going to the healthcare industry, the focus of this analysis is on what can be considered mostly “pure-play” healthcare investors. Top-tier firms that are multi-sector (tech or energy + life sciences) were not considered. As a result, certain well-respected and successful life science investors such as as New Enterprise Associates, Atlas Ventures, Canaan Partners, Polaris Partners and Venrock among others were left out.

With these criteria, we are focused on 100 dedicated life science investors and first highlight who comes out on top and then analyze their areas of focus from a geographic and sector perspective.

OrbiMed Advisors topped all other Healthcare VCs as the NY-based healthcare fund in our Investor Mosaic models. The firm has seen 5 exits in the past 2 months and over 10 since the beginning of 2013. Their most notable exits thus far this year come in the form of Saragon Pharmaceuticals, which was acquired for $1.7B by Genentech, and neuroscience-focused company SAGE Therapeutics, which went public in July 2014 at a valuation of $449.3M. Investor Mosaic scores for OrbiMed Advisors on the dimensions of network centrality and past performance also came in at the top of the list. Past performance is important in venture capital because of the phenomena of performance persistence in venture capital. In other words, in VC, past performance is indicative of future performance (it is not like public markets in this sense). Network centrality measures the firm’s connectedness with other firms. It is akin to Google PageRank for investors.

San Francisco-based Alta Partners and Menlo Park-based Versant Ventures rounded out the top 3. Alta Partners’ portfolio has been on a tear in 2014, as the life sciences fund has had 10 exits (9 IPO, 1 Acquisition) already this year, the largest of which was Kite Pharma’s June IPO which valued the drug development company at $632.4M.

The full ranking below with some of the funds’ most recent notable exits. Of note, all but 4 of these investors have had multiple Healthcare exits in 2014. 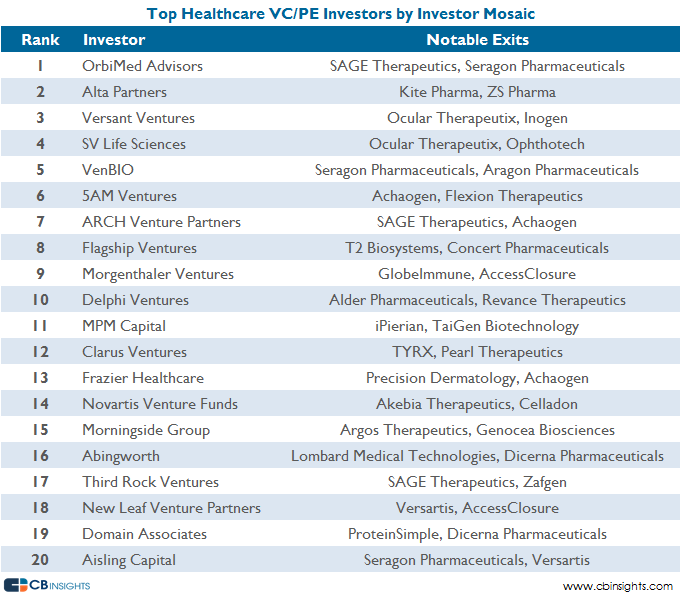 Life Sciences Partners, Venture Investors, and TPG Biotech led all Healthcare VCs in terms of follow-on rate. Follow-on rate is an important measure of firm quality as the ability to assist portfolio companies with follow-on financing.

Life Sciences Partners is an early to mid-stage focused life sciences venture capital firm based in Amsterdam while Venture Investors is a VC firm with offices in Ann Arbor, MI and Madison, WI that leverages nearby research institutions to invest in Midwest companies, including Ohio-based Aerpio Therapeutics and Juventas Therapeutics. 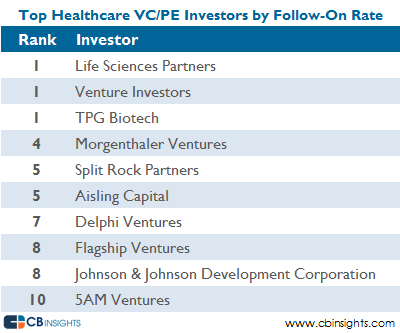 California captured 41% of Healthcare deal activity among the Top 20 healthcare investors with the Golden State seeing over 300 deals with participation from the top 20. Within California, some of the investments which featured multiple Top 20 VCs included Kalidex Pharamaceuticals‘ $45M Series A (MPM Capital, OrbiMed Advisors, Domain Associates, Frazier Healthcare, New Leaf Venture Partners) as well as Principia BioPharma which saw participation in its Series A and B rounds from Morgenthaler Ventures, OrbiMed Advisors, and New Leaf Venture Partners.

International investments made up 8% of all deals from the Top 20. These investments featured the foreign Healthcare VCs in the Top 20 which included Morningside Group (Hong Kong) and Abingworth (UK) as well as US-based investors OrbiMed Advisors, Novartis Venture Funds, SV Life Sciences, and others. 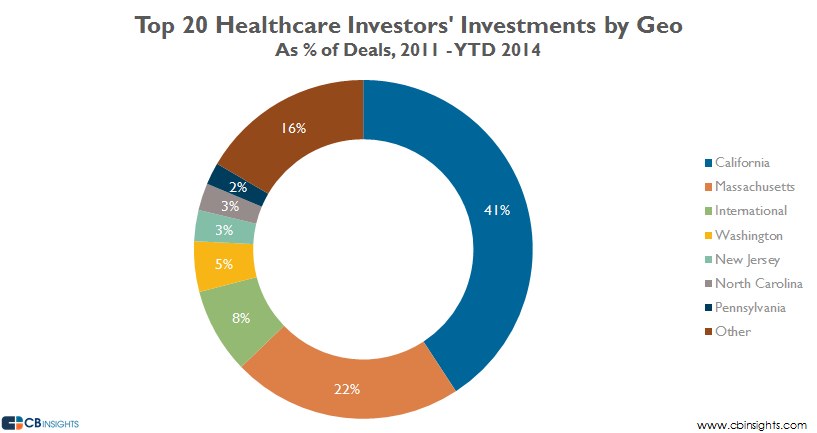 Medical Devices & Equipment captured over one-third of all deals within Healthcare from the Top 20 since 2011 as they participated in rounds totaling over $4B across over 270 deals. Cardiac defibrillator company Cameron Health’s $107M financing round was the largest among the top 20 investors within the Medical Devices space, seeing participation from Delphi Ventures before the company was acquired by Boston Scientific Corporation for $1.3B in 2012.

Biotechnology and Drug Development were second with a 20% deal share among the Top 20. ARCH Venture Partners has invested in two of the largest deals in biotech including Juno Therapeutics. Juno is developing cancer technology that will genetically modify patients’ white blood cells to attack cancerous tumors. ARCH Venture Partners has invested in every round the company has raised thus far, including a $134M Series B on August 5th, 2014 which saw participation from Venrock, Bezos Expeditions, and Alaska Permanent Fund, as well as a $120M Series A financing that took place just 8 months prior in December 2013. As other companies aim to get the CART technology to market, this could be a pivotal time for Juno as well as competitors Kite Pharma and Novartis. 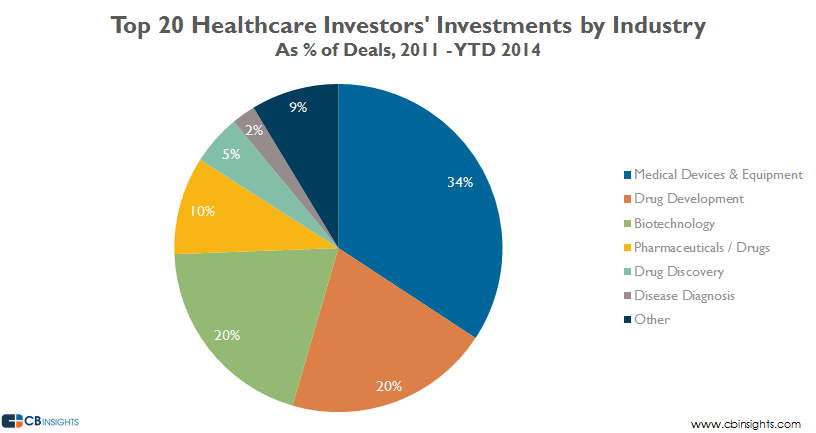