Research Brief
1878
There have been more than 5x the $500M+ rounds to VC-backed tech companies since 2014 than in the previous four years combined.

From 2014 onward, venture capital-backed tech companies have pulled in a total of 22 financing rounds sized $500M or more, including 10 already this year. The cumulative amount raised in these rounds was $17.5B.

That represents explosive growth compared to the 2010 to 2013 period, when there were just 4 financings that were $500M+, which cumulatively raised $4.2B. That means there were 5x more $500M+ financings from 2014 to-date than in the previous four years put together.

When looking at the geographic breakdown, half of the 22 rounds since 2014 went to international companies including a combined 6 financings for now-merged Chinese car-hailing apps Kuadi Dache and Didi Dache, as well as Indian eCommerce service Flipkart. The US $500M+ rounds are anchored by 4 Uber financings, as no other US company has more than one $500M round.

The increase in large rounds is another data point in the “tech is frothy” argument, and adds to our previous research that details the increasing number of $1B+ rounds, rise of hedge-fund and mutual-fund activity, and the ever-growing Unicorn club.

The full trend below. 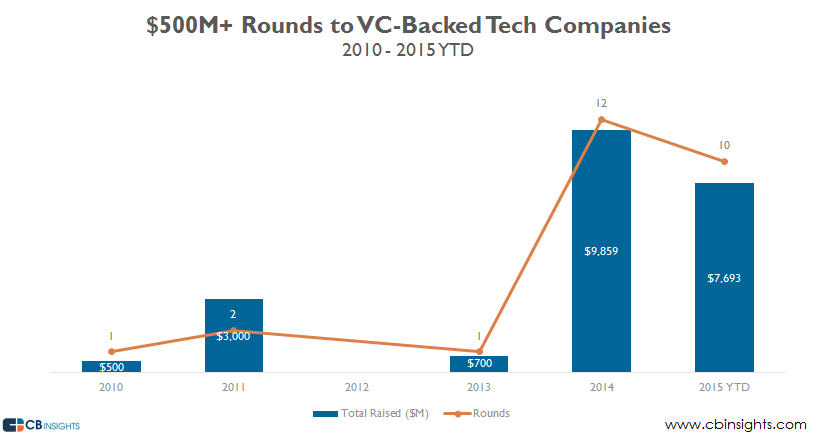 For this analysis, we counted only equity financing rounds to companies that have received VC financing at some point in their lifespan.

Want more data around tech financings? Login to CB Insights or sign up for free below.