Over the past few years, growth equity — also referred to as growth capital or expansion capital — has emerged as an increasingly common form of investment into private companies. As funding and deals to venture capital-backed companies pulled back in Q4’15, we decided to analyze whether a similar trend was evident in the activity of growth equity investors.

We used CB Insights data to analyze the 18 most active growth equity investors. This analysis will cover deal and dollar tech investment trends, deal trends by stage, and trends by industry. We selected:

*Note: Google Capital was not founded until 2013.

2015 was a record year for tech investment by these top growth equity firms. In aggregate, they participated in roughly $10.4B of financing across 168 deals to private tech companies in 2015. Despite a record year in investment, the quarterly trend reveals a noticeable drop-off in funding from deals involving these investors in Q3’15 and Q4’15, as well as a deal activity drop in Q4’15.

In Q4’15 these investors were involved in $2B of funding dollars across 41 deals, the lowest quarterly total by deals and dollars since Q1’15. The funding decline through Q4’15 can be attributed in part to the broader global pullback seen in mega-rounds to startups.

In Q2’15, there was a spike in funding with over $4.2B invested across 43 tech deals involving the 18 top growth equity players. The funding spike was largely due to 3 mega-rounds which accounted for 59% of funding for the quarter. The three mega-rounds involving growth equity investors from the list above were the $1.5B Series E to Airbnb, the $526M Series G to Spotify, and the $500M Series C to Zenefits. 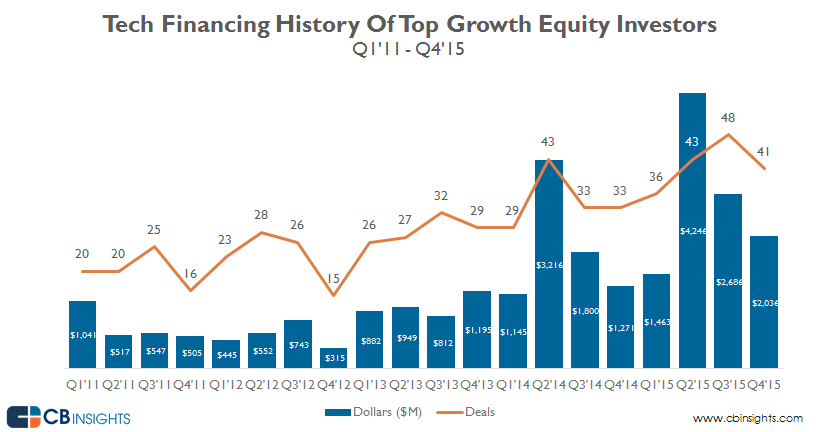 As the data below illustrates, the top growth equity firms are investing across different stages of private tech companies’ life-cycles. Mid-stage (Series B and Series C) deals involving these growth equity investors grew from 19 in 2011, to 50 in 2015. 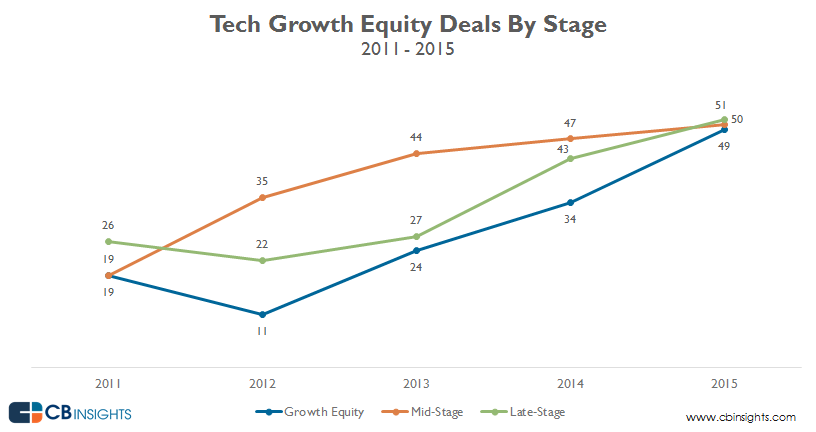 When analyzing investment by industry, internet software and services made up 61% of deal share in 2015. When taking a more granular look at internet software and services, we saw that one area being targeted by deals involving growth equity companies was HR tech, with deals involving growth equity going to companies like Gusto, GlassDoor, HireVue, Zenefits, and several more.

E-commerce accounted for 13% of deal share in 2015. Some notable deals that the top growth equity firms participated in were rounds to Blue Apron, HelloFresh, Dollar Shave Club and several others. 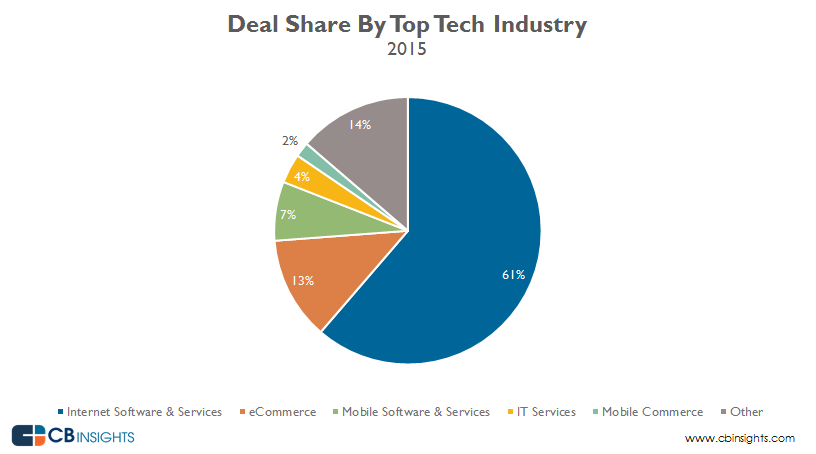