Over the past few years, growth equity — also referred to as growth capital or expansion capital — has emerged as an increasingly common form of investment into private companies.

We used CB Insights data to analyze the activity of a select group of growth equity investors. This analysis will cover deal and dollar trends, median round size analyses, investment trends by sector, and deal trends by stage.

*Note: Google Capital was not founded until 2013.

In 2015 year-to-date through 10/22/15, there was $8.5B invested across 130 deals involving the 13 selected growth equity firms. In terms of year-over-year (YoY) growth, 2015 dollars have already grown 15% over the previous year’s full-year total, while deals completed are also on track to surpass the 2014 total.

It’s worth noting that 2015 funding was buoyed by participation in Airbnb‘s $1.5B round, Spotify‘s $526M round, and Zenefits‘ $500M round, with the three deals accounting for almost 30% of the year’s total funding. 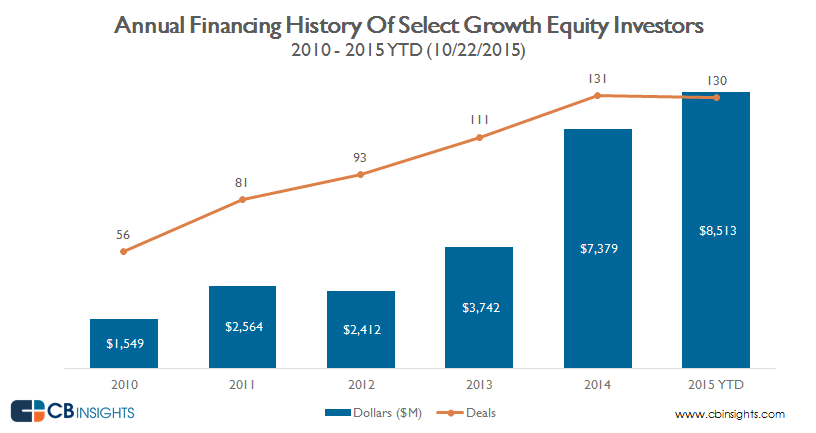 Deal activity our select growth equity investors has for the most part grown steadily since 2010. Three out of the last 6 quarters have seen 40 deals or more, with Q3’15 hitting a multi-year high of 46 deals.

There have been 8 consecutive quarters of $1B+ in funding deployed into deals involving these investors since Q4’13. 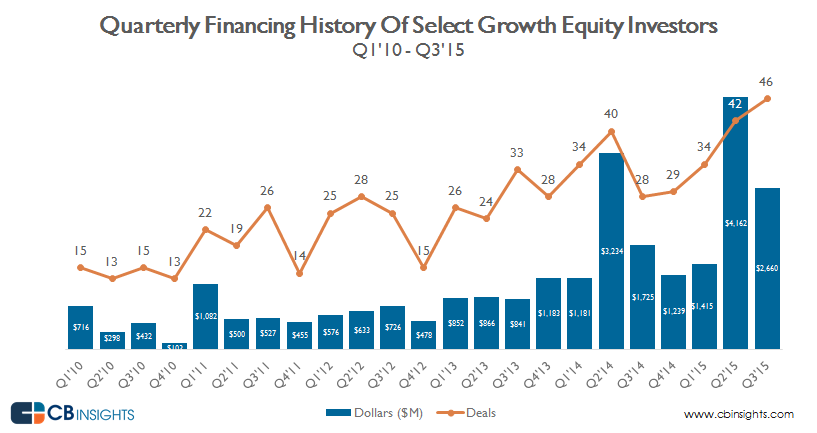 As the data below illustrates, growth equity-type investments into previously bootstrapped or more mature, revenue-generating companies accounted for the largest share of deals made by these 13 investors in 2015 year-to-date.

But late- (Series D+) and mid-stage deals (Series B and Series C) are an equally important part of the mix.

In 2015 YTD, the investors participated in 40 growth equity deals, but also 39 mid-stage deals, and 38 late-stage financings.

Mid-stage deal activity more than tripled from 2010 to 2012 and ended 2014 at 44 deals, a higher deal count than growth equity and late-stage financings. 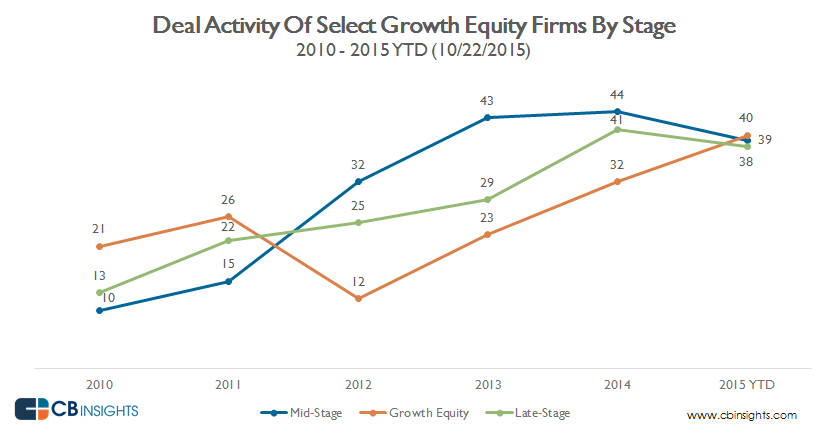 Interestingly, 2015 is the first year to see a dip in the median growth equity round size in the 6 years analyzed below. 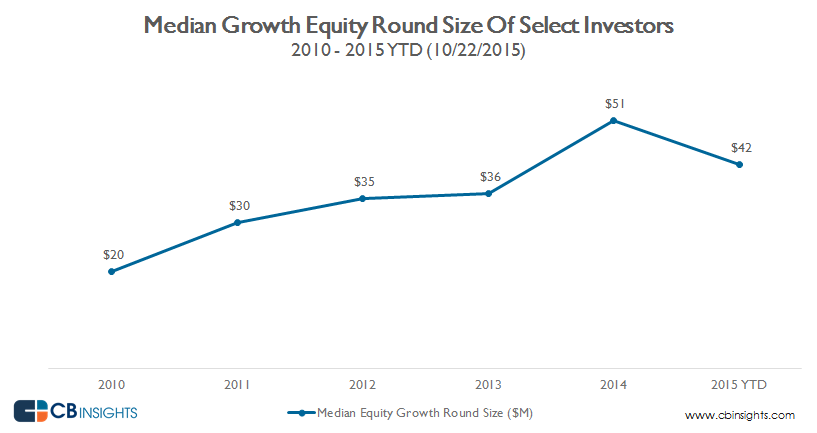 Below is a sector distribution for deal share from the selected growth equity firms.

Unsurprisingly, internet is the sector drawing the highest share of the growth equity firms’ deals, hitting 71% deal share in 2015 YTD.

Investment in the healthcare and financial sectors by these firms has steadily declined since 2010, and is hovering at 1% and 3% in 2015, respectively. 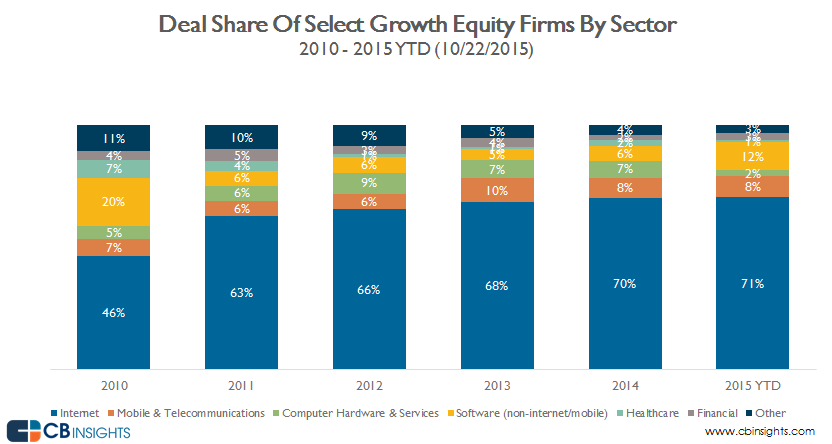 Below is a list of the 15 largest deals backed by one or more of the 13 growth equity investors listed above. Airbnb‘s $1.5B round and Uber‘s $1.2B round outshined all deals, while the rest of the top 15 deals raised at least $200M. Of note, most of the deals were into previously venture capital-backed companies as growth equity investors have not shied away from fast-growing tech “unicorns.”

As seen below, General Atlantic, Summit Partners, Technology Crossover Ventures, Insight Venture Partners, and Google Capital were active investors in the largest deals list. None of the deals involved more than one of our 13 selected growth equity investors.