Research Brief
2183
We looked at DAG Ventures, IVP, Meritech, and Technology Crossover Ventures' activity to analyze whether crowding was a factor in the late-stage private markets.

In April 2015, Institutional Venture Partners raised a $1.4B fund ($400M bigger than their previous fund) in order to target late-stage venture investments.

The VC fund’s size is interesting, as late-stage private markets have become increasingly competitive due to the participation of traditionally public market-focused hedge funds and mutual funds like Tiger Global Management, T. Rowe Price, Wellington Management, and several others.

Wellington Management — the mutual fund manager with over $900B in assets under management — raised a $500M pre-IPO fund in October 2014.

From an anecdotal point of view, it appears that late-stage private markets have become more competitive due to these relatively new entrants in search of promising late-stage funding deals.

So, are mutual funds and hedge funds in fact crowding out traditional late-stage venture capital investors?

Using CB Insights data, we analyzed the later-stage VC firms listed below, looking at deal activity and funding trends since 2013.

The chart below highlights private company deal activity of these four late-stage firms over the past three years.

Since 2013, Institutional Venture Partners has been the most active late-stage investor among the four compared, with over 60 deals completed year-to-date.

2014 saw the most deal activity with 183 deals completed across all 4 late-stage investors.

Deal activity among the late-stage investors is in fact down year-to-date through 10/20/15 compared to previous years, but not dramatically, especially considering the deals that might still be made before year-end.

Also, deal activity dipped down in general across VC-backed companies globally in Q3’15, so we might expect to see some slack in late-stage as well. 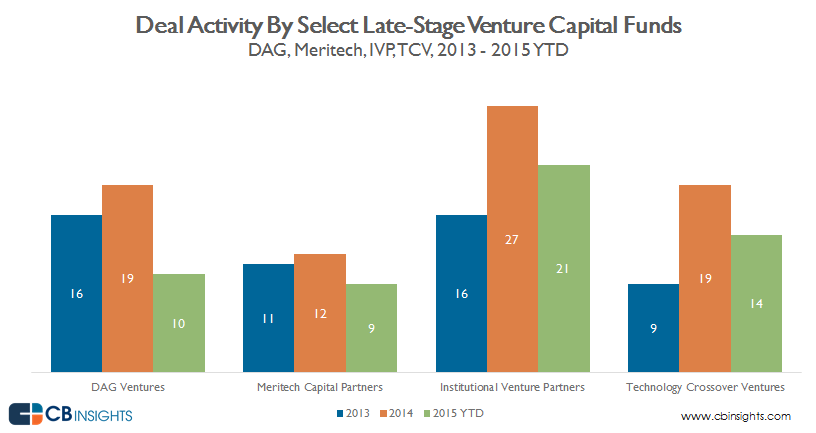 If late-stage VC investors were being crowded out by the hedge funds and asset managers, we would expect their first-time deals in particular to be affected.

But interestingly, the trend was mixed. DAG Ventures, and Meritech Capital Partners are participating in less first-time deals. But Institutional Venture Partners is participating in more first time deals (as might be expected given the size of their new fund).

Technology Crossover Ventures has made 9 first-time deals through 10/20/15 compared to 11 last year, and so is likely to end the year flat. 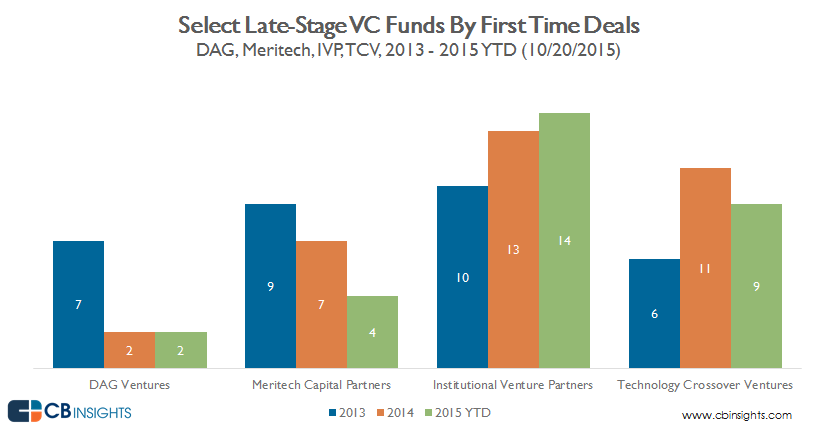 CB Insights performed a similar analysis to this with 2013 data and back then we asked if late-stage investors would boost their mid-stage deal activity in 2014 and beyond in light of the increased competition.

Late-stage deals still surpass mid-stage financings by 20 deals in 2015 year-to-date, the same gap as in 2014. 2015 had some large late-stage deals involving one of the late-stage VCs we tracked, including SoFi‘s enormous $1B Series E, Spotify‘s $526M Series E, and Lynda.com‘s $186M growth equity round. 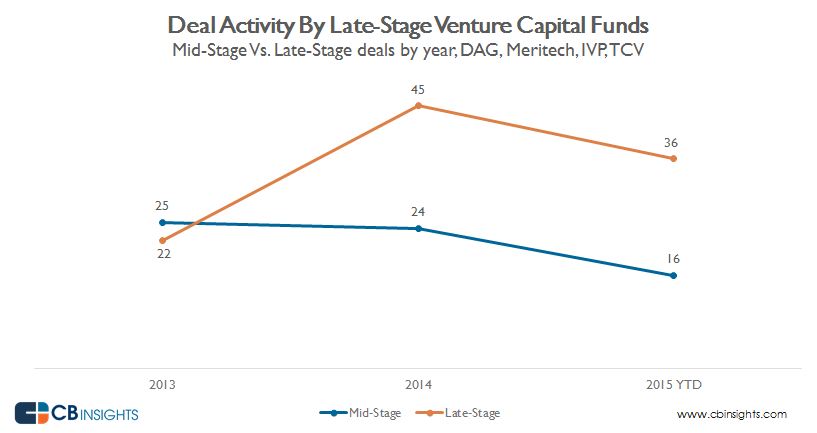 While it doesn’t appear that late-stage investors have been affected by the activity of hedge funds and mutual funds recently, the rush into late-stage is only increasing. Y Combinator has launched a growth fund and private equity firm KKR’s has a new growth fund as well.

Will these trends persist?  Will late-stage investors continue to stick to their guns or will they attempt to make earlier bets as competition in late-stage private markets continues to rise? Let us know what you think in the comments below.

Want more data on late-stage investors? Login to CB Insights or sign up for free below.