The Kiwi and Aussie tech scenes saw a deal high in 2015, but activity did slip in the last two quarters.

The Australian tech scene made a splash in 2015 thanks to the $1.1B IPO of collaboration and work tools developer Atlassian. With a breakout tech success as a role model and several investors and accelerators setting up shop in the area, Australia and New Zealand are poised to strengthen their position as tech hubs going forward. We used CB Insights data to look at financing trends for Australia- and New Zealand-based tech startups, as well as the most active investors in the two markets.

Australia/New Zealand have seen a nearly linear increase in the number of deals happening, with the two markets together reaching a peak of 160 deals in 2015 (a 789% increase since 2011). Funding also broke $600M for the first time in 2015, with 5 deals above $50M including deals to music startup Guvera, lender Prospa, and logistics specialist Temando. The biggest jump in funding was between 2013 and 2014, which saw a 411% year-over-year increase, largely due to a massive $250M growth equity round into Sydney-based email marketing platform, Campaign Monitor.

Though Australia has been seeing a growth in activity, in a quarterly view there has actually been a dip in Q1’16, with $96M invested across 30 deals in the quarter. This represents the second-consecutive decrease in deals an dollars (though 3 of the last 4 quarters have seen more than $150M of investment). Also of note, this slowdown has been a trend globally, not just in Australia and New Zealand. But it does indicate that the halo effect of Atlassian’s IPO was not enough to counteract the forces causing a global pullback. 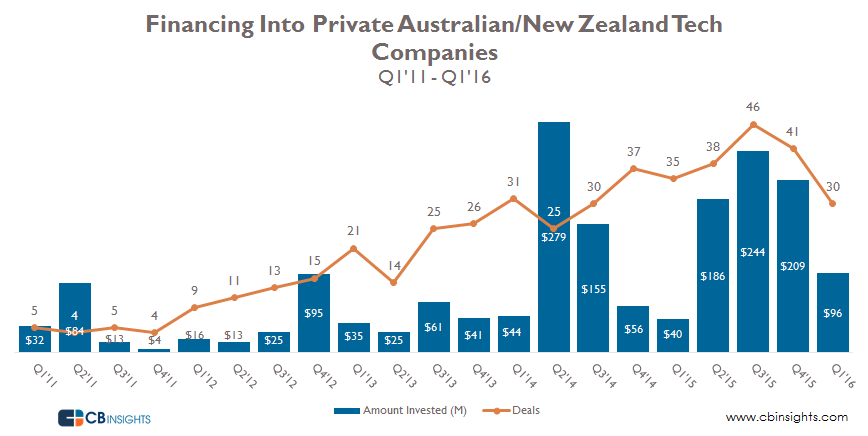 Looking at annual deal share by company stage over time, there’s a clear rise in early-stage activity in earlier years, as accelerators and early-stage funds developed in the Australia/New Zealand ecosystem. Nearly 85% of all deals that happened in 2014 were at the early stage (seed/angel and Series A). More recently, as companies mature, we’ve seen a decline in the share taken by those deals. The fastest-growing category has been “other” rounds, a category that includes convertible notes, corporate minority deals, and funding rounds not attributed to a specific stage. 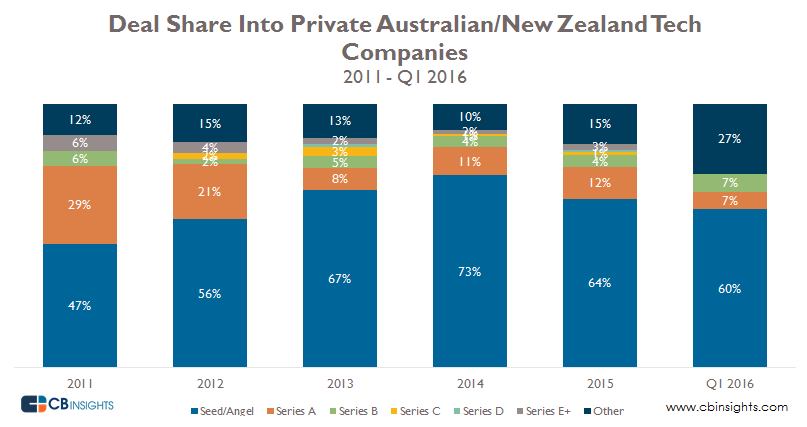 Accelerators and incubators are by far the most active investors in the Australia/New Zealand ecosystem, with Lightning Lab leading the way with more than 35 unique companies invested in since 2011. Lightning was followed by Muru Digital (muru-D), a startup accelerator backed by Australian telecom Telstra and the only other investor with investments in 20 or more unique companies since 2011 (of note, Telstra’s VC arm is also on the list). The ranking is also populated with venture capital firms focused specifically on the Australia/New Zealand tech scene, such as Starfish Ventures, AirTree Ventures, Blackbird Ventures, and others.

Want more data on startups “Down Under”? Check out our database below.