Since 2012, grocery delivery startups have generally seen a higher number of deals than meal delivery companies, but those deals were usually smaller. If activity continues at its current pace, 2016 will be the first year grocery delivery receives more funding dollars than meal delivery. This is partially due to inactivity by meal delivery’s largest players: China’s Ele.me and Germany’s Delivery Hero accounted for a significant portion of total funding to meal delivery startups in 2015, but neither has raised so far this year. Also, it’s important to note that Postmates, which primarily provides meal delivery, may be in the process of raising a $100M+ round that could close before the end of Q3. If this happens, it will give the meal segment a significant funding boost.

Since 2012, grocery startups have generally beaten meal delivery startups in quarterly deal count, however only by a small margin. But this year these companies are widening the gap. For the past two quarters, grocery delivery attracted over 50% more deals than meal delivery. 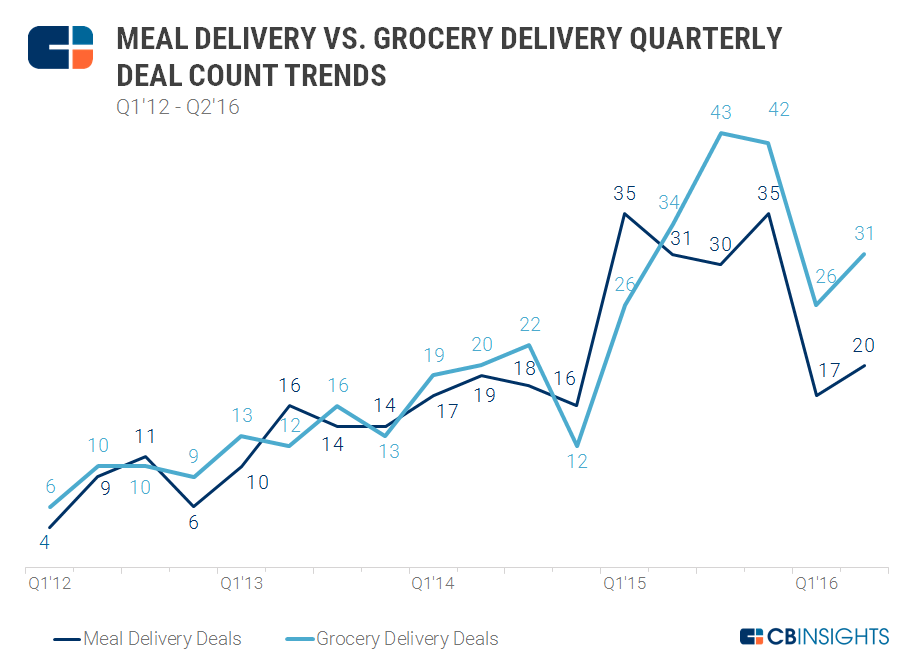 Thrive Market led the grocery delivery segment in Q2’16, with a $111M Series B. Beijing-based produce service MissFresh ranked second with a $36M Series B-II, followed by a $19M growth equity round to Vinomofo, a membership-based Australian site that offers curated selections of wines. The largest meal delivery deal in Q2’16 went to the Seoul-based Woowa Brothers with a $50M private equity round from Hillhouse Capital Management. Rounding out the top three were a $12M Series A to Helsinki-based Wolt, and a $7M Series C follow-on to Bangalore-based Swiggy.

The quarterly funding highs to meal delivery throughout 2015 were driven by multiple massive rounds raised throughout the year by two of the sector’s largest players – Ele.me, in China, and Delivery Hero in Germany. Ele.me raised a $350M Series E in Q1’15, a $630M Series F in Q3’15, and a $1.25B corporate minority by Alibaba Group in Q4’15. Delivery Hero raised a $563M corporate minority round from Rocket Internet in Q1’15, followed by a $110M Series H in Q2’15. These deals were instrumental in pushing funding totals for the segment above $500M in every quarter of 2015, including two $1B+ funding quarters. While grocery delivery funding is lately surpassing meal delivery funding, no single grocery startup has yet become a dominant enough player to help push quarterly funding above $500M in any quarter so far. 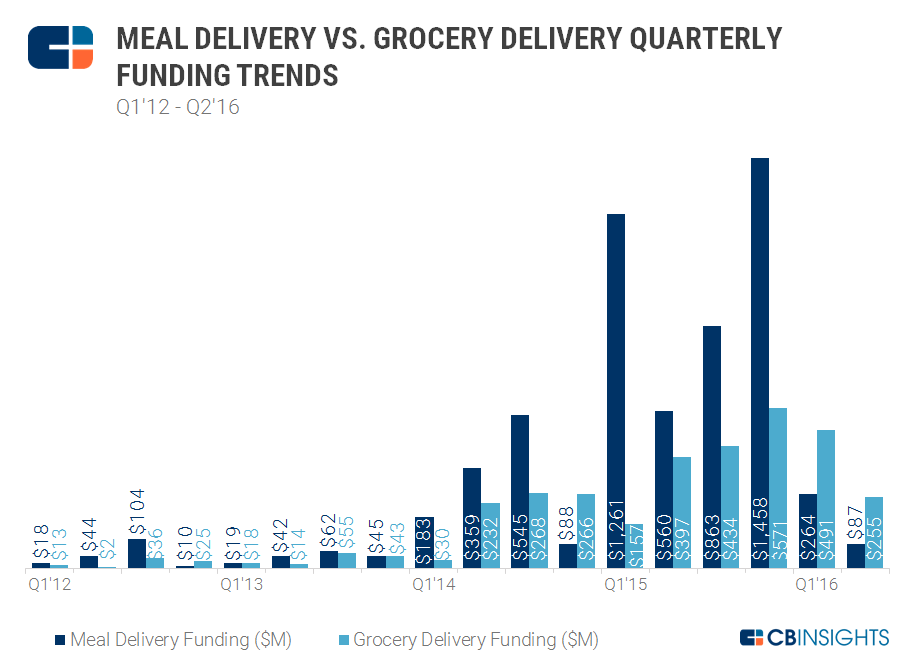 Want more data on financing to on-demand startups? Login to CB Insights or sign up for free below.