With exits including Facebook, Workday and Palo Alto Networks, Greylock Partners is among the most prominent and successful firms in venture capital. We dig into what, where, and with who Greylock is investing.

Greylock Partners is one of the oldest and most successful venture capital firms ever, having invested in a number of tech’s most successful and largest firms including Facebook, Workday, Palo Alto Networks, and LinkedIn to name just a few.

Greylock is also among the most prolific investors in so-called “unicorns” — with 10 billion-dollar private companies in its portfolio today, 4 of which were early-stage investments highlighting the firm’s prescience in making early bets.

Using CB Insights data and visualizations, we dive into the financing strategy, investing pace, investment syndication patterns, and more in this “teardown” of Greylock Partners.

Greylock has slowed its pace of investments in 2015 having completed 43% fewer deals than the same period last year. A slowdown that’s primarily attributable to a decline in seed activity.

However, given the firm’s fund size (Greylock XIV was $1 billion), it remains among the more active VC funds investing across both the consumer and enterprise realms. Below are some of Greylock’s notable recent bets.

Below is a graph of Greylock’s monthly investment activity (deals and funding participation) over time, taken from their profile on CB Insights.

Greylock has notched 12 exits in 2015 year-to-date — all of which have come in the form of acquisitions amid the well-publicized IPO drought for VC-backed companies. Here are some of its most notable exits since the start of last year.

The scatterplot below highlights Greylock’s exits over time (those with disclosed valuations).

Geographic strategy — Doubling down on California

Within the U.S., California took nearly all deals by Greylock over the last four quarters including Meerkat, Nextdoor, Docker, and Product Hunt among others. Just two deals went to Massachusetts, where Greylock invested in HourlyNerd and WiGo.

Greylock pursued more geographically diverse investments in the previous four quarters — when the firm completed deals in Washington state, New York, Washington DC, and Utah. The latter two were due to investments in SmartThings (acquired by Samsung) and Domo Technologies, a unicorn now valued at $2B.

Stage strategy — Seed/Series A take nearly half of deals

Over the last two years, Greylock has been an active seed investor. The seed stage accounted for nearly 27% of Greylock’s new and follow-on deals although as mentioned above, the seed activity has declined as of late. Series A deals took one-fifth of Greylock’s deals over the period, while Series B and Series C deals combined to take nearly 28% of deal activity. 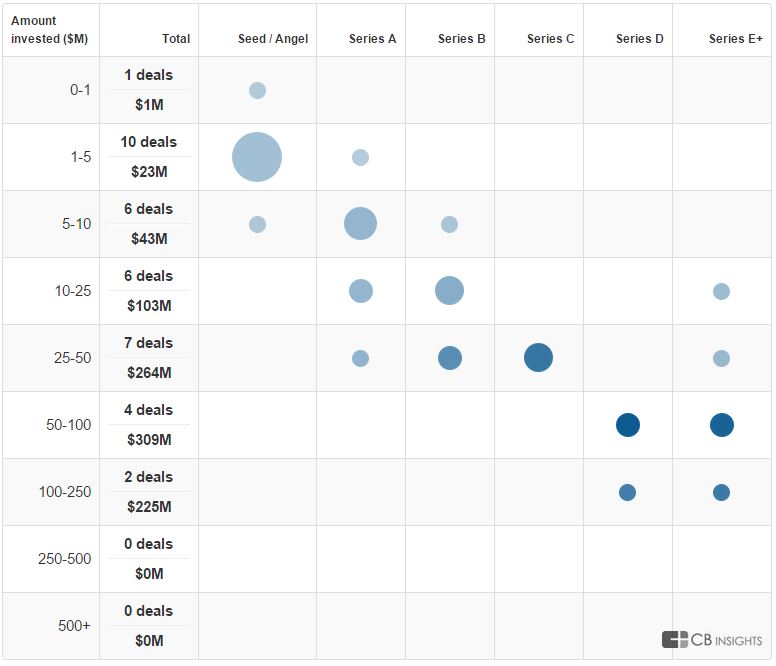 The chart below from CB Insights’ Investor Analytics tool shows the proportion of Greylock’s new investments vs. follow-on investments in each quarter for the past two years. Overall, Greylock, given its fund size, continues to do new deals and invest in follow-on rounds of companies which are showing momentum. Greylock did fewer new deals in the first half of 2015 compared to the same period in 2014, when the firm completed 18 first-time deals including Sprig, Docker, Medium, Vessel, and Grand Rounds. 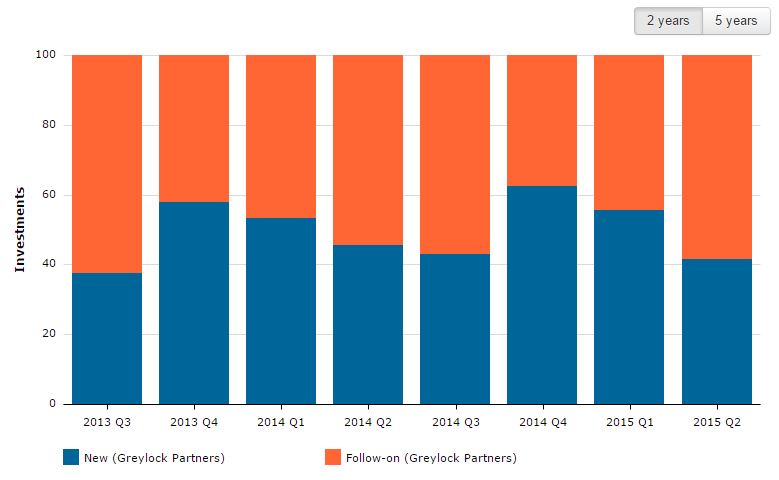 Greylock’s median deal size has swung from as low as $8M to as high as $38M in recent quarters largely due to participation in larger follow-on deals. These include recent participation in Docker’s $95M Series D, Sprig’s $45M Series B, and Sumo Logic‘s $80M Series E.

A screenshot from the Investor Analytics tab on CB Insights showing the deal size trends of Greylock financings by quarter over time is below. 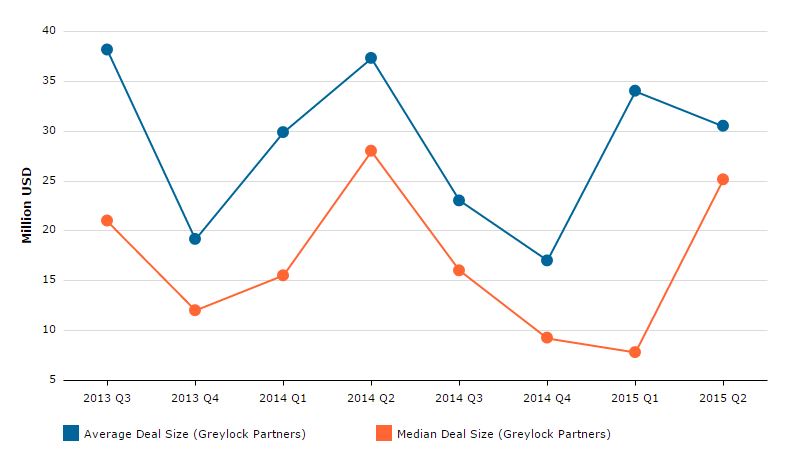 SV Angel is the most frequent co-investor with Greylock over time and the two have co-invested in 32 companies together, across 34 rounds. Andreessen Horowitz has emerged as Greylock’s second most frequent co-investor, with the two sharing investments in 25 companies including Okta, Tidemark, and Lookout among others. Y Combinator was the top feeder of dealflow to Greylock, followed by SV Angel, and Accel.

T. Rowe Price, which has led the mutual fund charge into VC-backed tech companies, is among the most frequent investors after Greylock with seven companies over time including Dropbox, Cloudera, AirBnB, and Redfin.  This is consistent with what the data has revealed about mutual fund investors in that they prefer to invest in brand name VCs with long track records of success — a description that fits Greylock.