For the past three years, both investments and exits in greentech have been on the rise. However, with an upcoming court hearing on the Clean Power Plan creating an uncertain regulatory future, and a precipitous drop in dealflow since 2015, the industry appears to be in the midst of a prolonged downturn.

Since 2012, entrepreneurs working on environmentally friendly technologies in areas including energy and agriculture have garnered over $16B in funding, most of which has been concentrated in the US. However, despite three years of consecutive increases, funding to greentech companies is projected to decline this year.

As a supplement to private market financing, governments have dedicated funds to sustainability projects such as the recently approved Desert Renewable Energy Conservation Plan, intended to set aside 22 million acres in California for conservation efforts and renewable energy projects. This should help offset the decline in investor dollars going towards greentech startups.

Thus far this year, deal funding and activity have reached nearly $2.4B across 146 deals through 9/7/16. At the current run-rate, funding is projected to reach close to $3.5B this year, representing an 11% drop from 2015. Following three consecutive years of increases in funding, a decline for full-year 2016 would represent the first drop in dollar investment since 2013.

Deal activity is on pace to fall further. At the current run-rate, it’s projected to be down 20% compared to 2015, to 213 deals. This will be the second year with a drop in deal count since reaching a four-year high of 310 deals in 2014.

Funding to date has been buoyed by large Series A deals to two Chinese electric vehicle companies, a $1B Series A to WM Motors, and a $121M Series A to Chehejia. 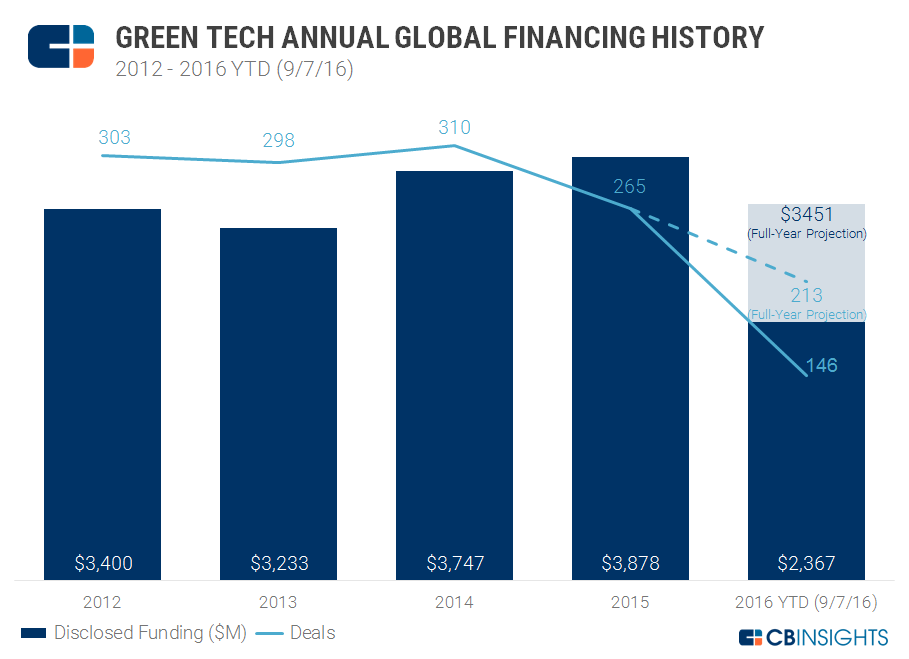 On a quarterly basis, total funding in Q2’16 saw a 60% jump over Q1’16. While this was in large part due to the aforementioned Chehejia deal, there were other large deals in Q2’16 including late-stage rounds to energy storage company Enovix and electric vehicle charging station company Chargepoint.

Deal count held steady through Q2’16 compared to the prior quarter, hovering around 52, which represents a slight improvement over Q4’15. However, every quarter during the period of Q1’12-Q3’15 saw over 60 deals each, suggesting that the sector is now in a protracted slump. 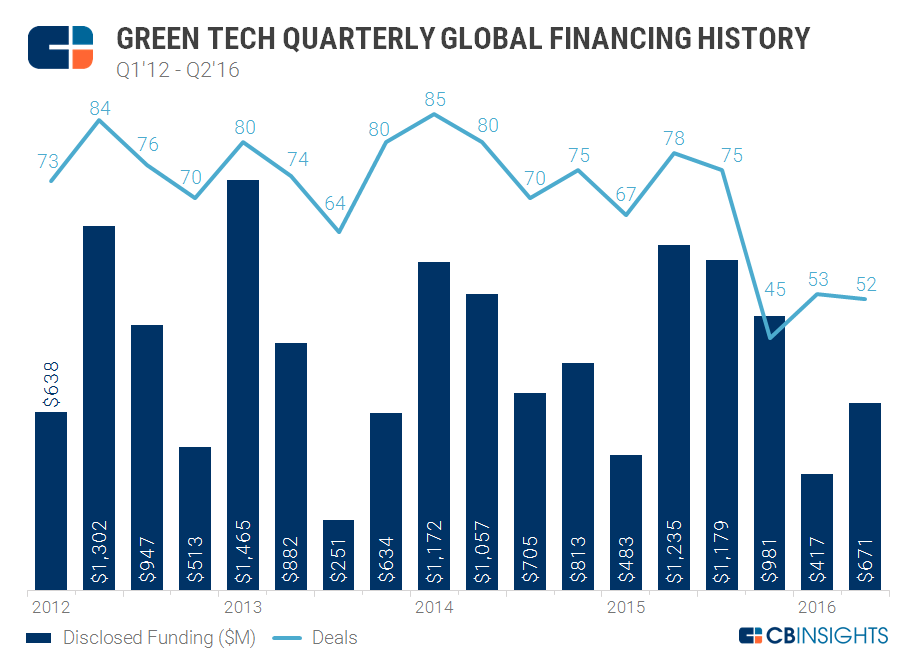 Early stage companies received just under 30% of funding dollars for 2016 YTD, with seed and angel deals making up the largest share, at 18%. The remainder was split fairly evenly between Series B, C, and E, with Series D deals continuing to take the smallest share, at 3%.

Two of the larger seed-stage deals in 2016 include $5M rounds to Iceland-based Matorka, focused on land-based, sustainable fish production, and Polystyvert, developing an eco-friendly approach to polystyrene (Styrofoam) recycling.

“Other” funding rounds to the greentech industry have been hovering around 45%. This category includes corporate minority rounds, convertible notes, and other types of equity rounds. 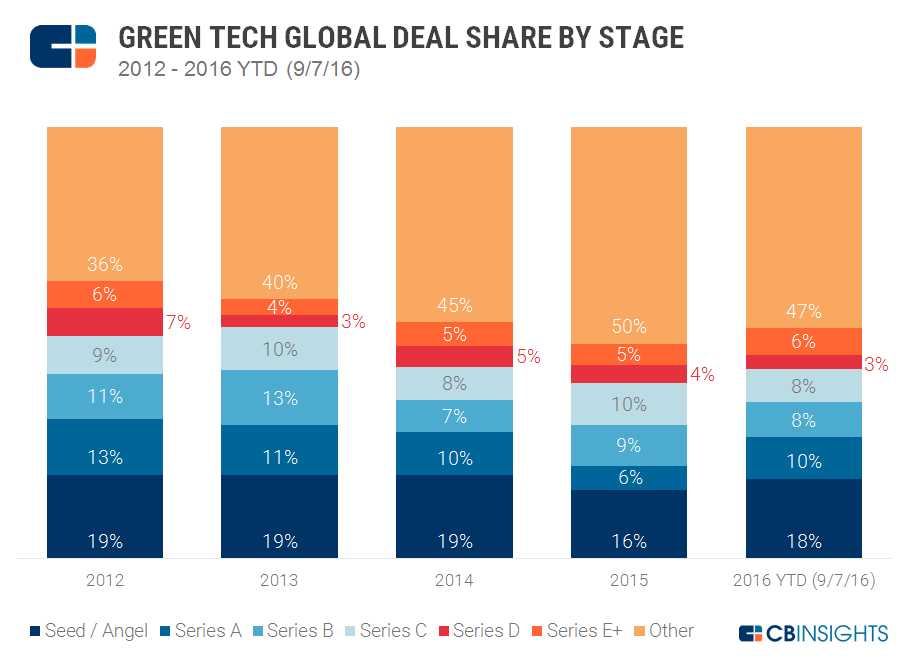 Broken down by country, deals to green companies since 2012 have been heavily concentrated in the US, accounting for 75% of total dealflow. Canada and the UK came in next with 6% and 5% of deals, respectively, while Germany and India round out the top 5. The remaining 10% of funding was spread out over 35 countries, with none capturing more than 1%. 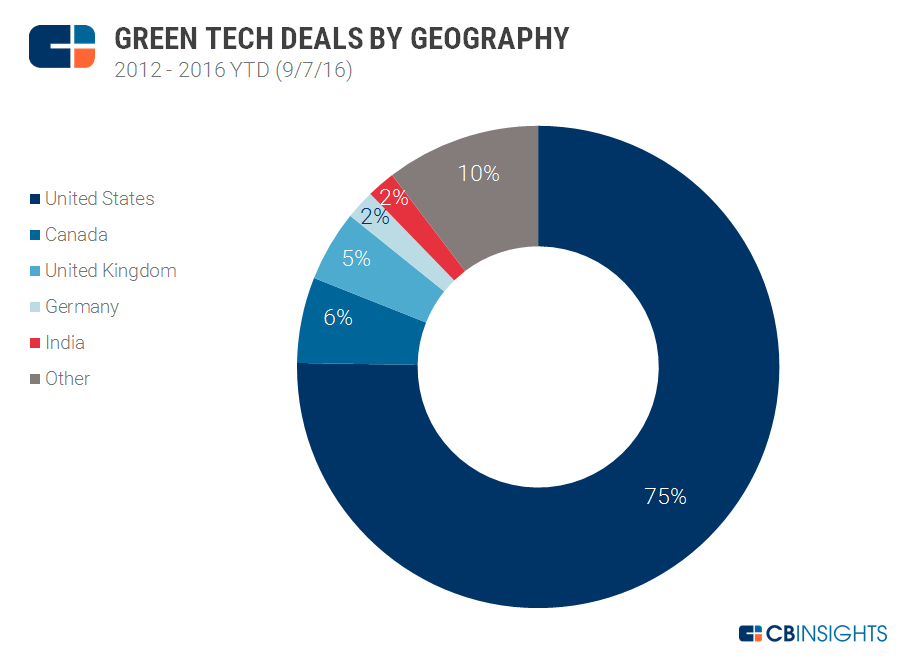 Kleiner Perkins Caufield & Byers (KPCB), Khosla Ventures, and Braemer Energy Partners have been the most active investors in private greentech companies since the start of 2012. KPCB’s investments have been weighted towards mid-late stage deals such as the recent $25M Series D to smart building company Enlighted.

Khosla Ventures, historically bullish on green/clean tech investing, appears to have pulled back recently with only 1 investment in 2016 YTD to Alveo Energy, a developer of battery technology.

There have been 29 IPOs since 2012, one of the largest being Abengua‘s $609M IPO in 2013. Notable exits this year include the April IPO of water resource management company Global Water Resource and Hydro One’s acquisition of Ontario-based Orillia Power Distribution, a provider of environmentally friendly energy services.

Notably, while electric car companies have garnered large funding rounds as of late, there have also been failures. Bright Automotive, a former developer of hybrid electric vehicles, underwent an asset sale to Echo Automotive in 2013. Echo Automotive then shut down the following year. In addition, solar cell manufacturer MiaSole, once valued at $1.1B, underwent an asset sale of $30M to Beijing-based Hanergy Holding Group in 2012. 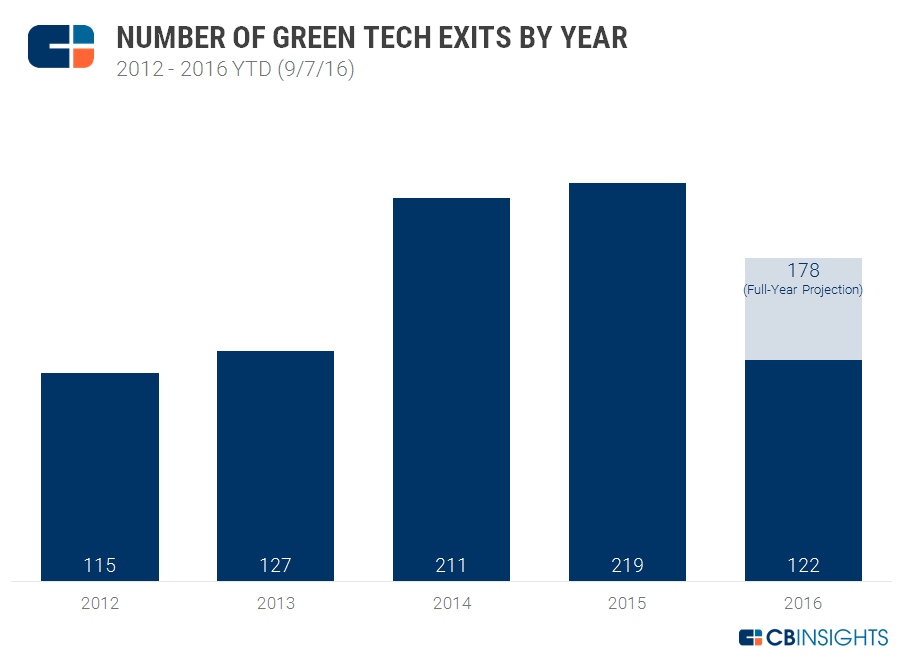