Research Brief
1591
If we are in the midst of the 'next wave' of Green Tech, what would the data show? Long-time clean tech VC Rob Day dives in.
The following is a guest post by Rob Day (@cleantechvc), Partner at Black Coral Capital.

Venture capital dollars into Green Tech remain significantly down from their peak. And yet Green Tech markets – not just solar, but LED lighting and energy efficiency, clean water technologies, alternative food production, etc., are all booming. How does this add up?

Well, let’s imagine for a moment that, after learning some hard lessons in the 2000s, many venture capitalists backed away from these markets altogether but that the few venture capitalists still investing into the Green Tech mega-trend shifted strategies dramatically. These investors have eschewed capital intensive commodities manufacturing plays concentrated in a very short list of technologies (solar panels, biofuels, cars, LED chips and batteries, for the most part). And instead, they’ve targeted new downstream business models closer to the evident market growth, and IT/web based businesses designed to scale quickly with relative capital efficiency.

If this kind of “next wave” of Green Tech was indeed happening, what would the data show? It would show a few lingering “last wave” startups capturing significant late-stage dollars concentrated into that short list of sub-sectors, an increase in smaller, earlier and more diverse “next wave” investments. And indeed this is what the terrific annual venture capital report by CB Insights shows, in their Green Tech data tracking. Seed and Series A at 30% of tracked deals (up from 25% in 2013), Series D and E at 31% of tracked deals (up from 23% in 2014). 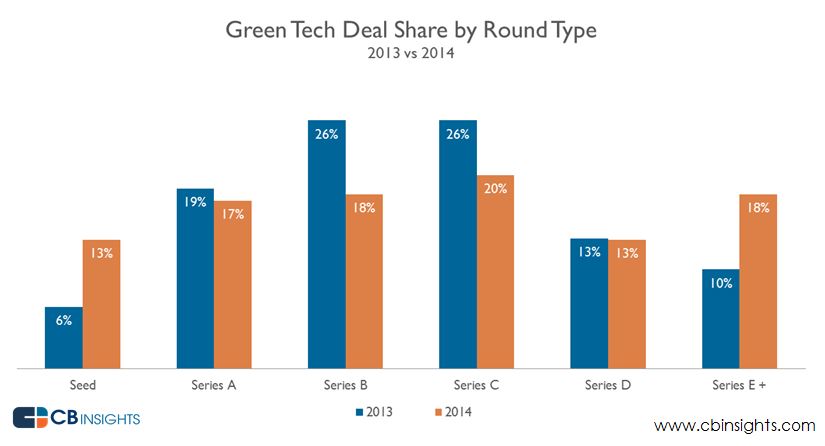 Furthermore, while “Renewables” (which includes Bio-energy and Solar) made up 33% of the dollars invested in 2014, they were only 20% of the deals – a bit of an indication of the more diversified set of sub-sectors now being tackled as part of this “next wave” at the early stage. Indeed, predominantly IT-based investments (efficiency, software, eCommerce, electronic components, etc) made up 42% of the tracked deals, but only 27% of the dollars.

It’s difficult to parse out stage effects from inherent capital-intensity, but an overall picture of a sector in transition is easy to paint with this data. 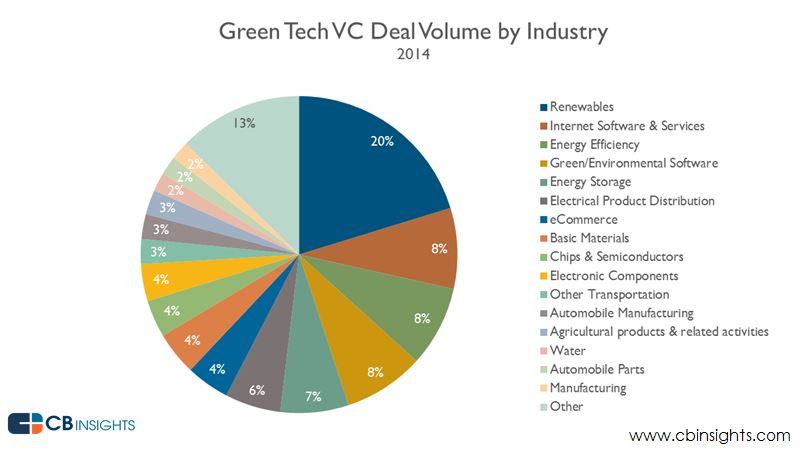 Unfortunately, this comes in the midst of a continued pullback from Green Tech among generalist investors. While a few check-writers have changed strategies to tackle these fast-growing markets with capital-efficient and scalable new approaches, too many VCs and limited partners continue to perceive that Green Tech is capital-intensive without exception and narrowly defined to upstream commodity manufacturing. Thus, even specialist firms talking about new strategies are having significant difficulties raising new funds, and generalists largely remain sidelined, and as a result the overall deal activity for the sector as a whole remains down.

As the CB Insights data shows, this is creating an increasing challenge for Green Tech entrepreneurs at the Series B/C stage: Too expensive for small-check early stage specialists, too early for sector-agnostic growth stage VCs. A lot of startups I work with are having to confront this Series B/C gap head-on, and the smart entrepreneurs are staying very lean post-Series A to make sure they can get to obvious market momentum before heading out to find any new outside investors. And when they do, many are wisely avoiding any mention of “Clean Tech” or “Green Tech” in their pitches, naturally.

But there’s one obvious exception to this “next wave” narrative, of course: Energy storage. It’s a relatively hot sub-sector right now, in 5th place among Green Tech sub-sectors tracked by CB Insights in terms of deal counts, but 2nd place in terms of dollars. That speaks to the capital intensity of energy storage technology development, which I’ve heard analogized to the last wave of solar panel manufacturing innovation. Which begs the question: If the “next wave” of capital-efficient, downstream-oriented Green Tech is now here, who’s making these big “last wave” style bets into energy storage? There are clearly still competing narratives at work in the sector.

The downstream markets are booming. Market analysts project that more than half of the lighting market will shift to LEDs before the decade is out. Monthly sales of EVs in the US have grown around six-fold since 2011. Not captured in any VC data, of course, are the fast-growing billions of dollars per year being deployed as implementation capital deploying these and other green technologies – this is an area my own firm is particularly diving into these days, in fact. In the end, venture capitalists are typically very smart, and will figure out ways to make compelling bets taking advantage of this kind of market growth and “creative destruction” opportunity.

But when they jump back into Green Tech, which style of entrepreneur will VCs favor? Capital-intensive, upstream “last wave”, or scalable, downstream “next wave”? There’s evidence in the CB Insights data to support both perspectives. I guess we’ll all have to wait to find out.

Rob Day (@cleantechvc) is a Partner with Black Coral Capital, based in Boston. He has been a clean tech private equity investor since 2004, and acts or has served as a Director, Observer and advisory board member to multiple companies in the energy tech and related sectors, currently including Digital Lumens, Next Step Living, Noesis Energy and Powerit Solutions.