GreenSky is already profitable, is successfully targeting creditworthy customers, is  scaling verticals, and has avoided controversy, unlike many of its alternative lending peers. We dig into why GreenSky's financials, partnerships, new markets, and industry positioning could help it achieve a more positive outcome than other publicly traded alternative lenders.

GreenSky is a digital lending platform that partners with home contractors, specialty retailers, and healthcare professionals to offer consumers point-of-sale financing. In 2017, the Atlanta-based fintech unicorn did $326M in total revenue.

GreenSky plans to raise $750M in an upcoming IPO that would value the lending platform around $4.35B, on par with the company’s most recent valuation in the private market. While other alternative lenders such as Lending Club and OnDeck have floundered in the public markets, here are five reasons why GreenSky’s IPO could be a fintech winner.

GreenSky has scaled a model in which it essentially acts as a middleman for loans. One the one hand, it partners with banks, which pay GreenSky a percentage of loans generated, and, on the other hand, works with home remodeling contractors, who actively market GreenSky’s solution to homeowners. These contractors will also pay a percentage of the loan amount to GreenSky. Home Depot is a prominent partner of the digital lending platform.

While GreenSky does keep a small portion of loans on its balance sheet, the platform focuses primarily on making the point-of-sale financing experience more frictionless by improving the sourcing of customers and facilitating & servicing loans. 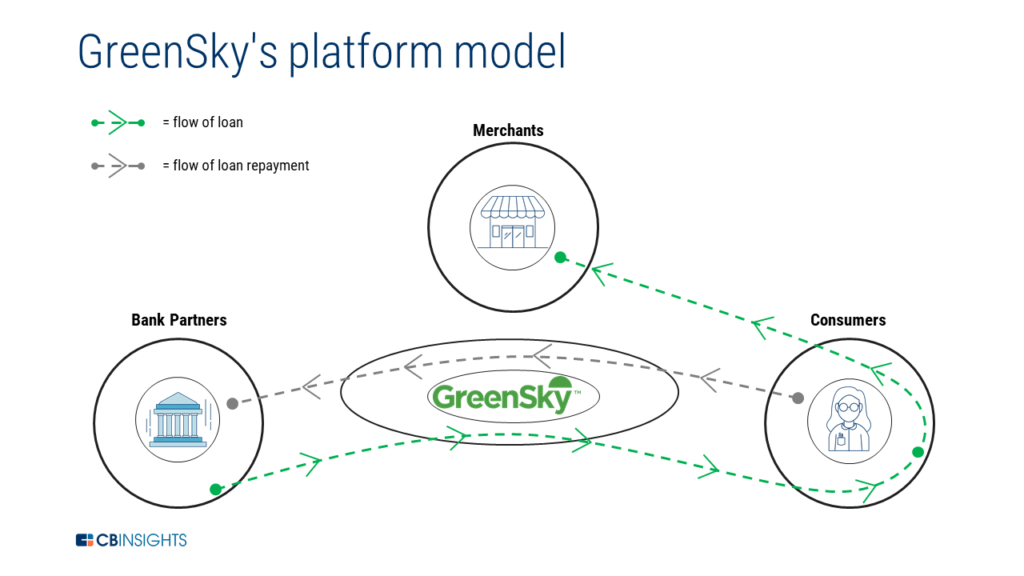 Compared to publicly traded marketplace lender Lending Club, which has yet to achieve profitability, GreenSky has been profitable for the last five years.

This is because GreenSky generates revenue in two ways:

1/ An upfront transaction fee every time a merchant receives a payment from a consumer after using the platform.

2/ A recurring servicing fee from bank partners over the lives of their loans.

GreenSky has also notably maintained strong EBITDA margins of close to 50% since the start of 2016, meaning that the company has good cost control, with only about half of its revenues going to top-line expenses. 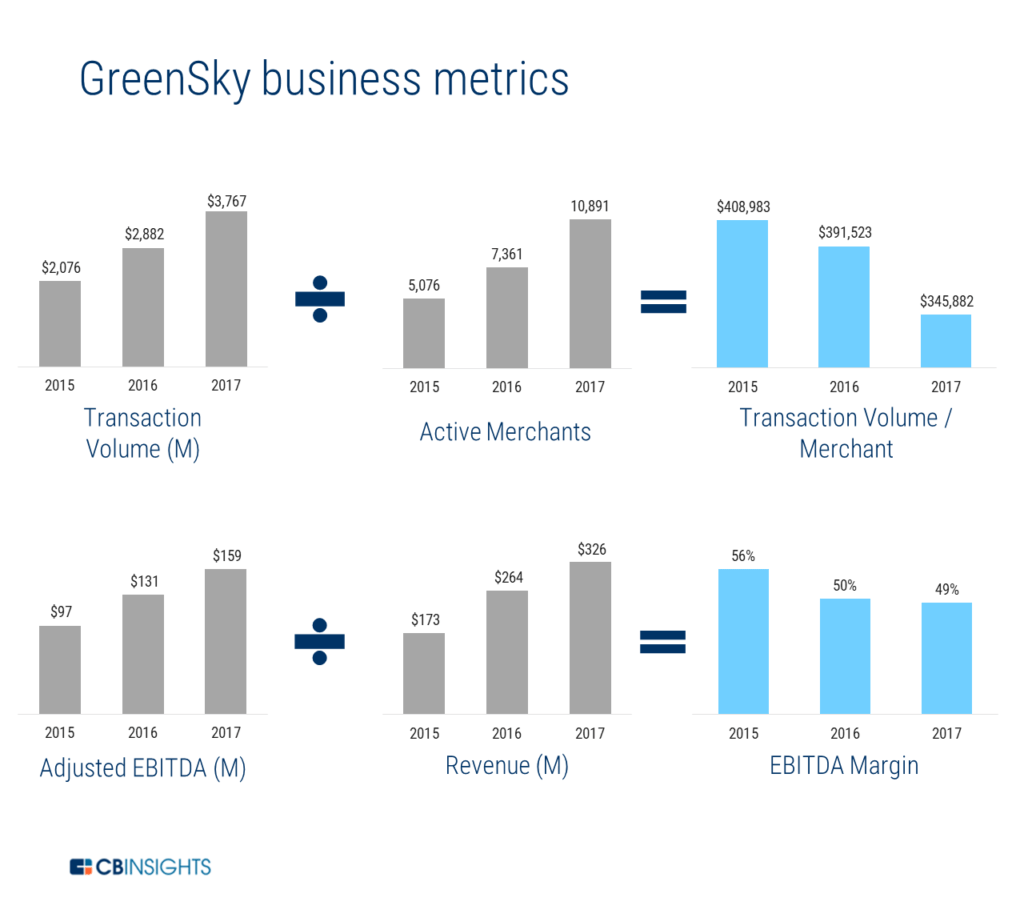 GreenSky has shown it can scale a targeted vertical. In 2017, GreenSky noted that the home improvement market was estimated to represent close to $315B in spending volume. The company’s own transaction volume, largely in the home improvement space, hit $3.8B last year.

That’s not to say GreenSky’s entry into healthcare will be simple; one of its listed risk factors is increased regulatory scrutiny on alternative financing for elective healthcare procedures.

Other potential markets GreenSky said it is exploring in its filing include “online retail, power sports, auto repair, and jewelry.” A move into online retail point-of-sale financing would put it more directly into competition with companies including Affirm and Klarna.

While it may seem risky to rely on these four banks, they are happy to work with GreenSky. Using CB Insights earnings transcript tool, we see that several of GreenSky’s largest bank partners have either spoke highly of or planned to continue their partnerships with the lending platform.

Part of the reason is likely because GreenSky works with super prime and prime customers with a weighted average credit score of 771. By comparison, the average Prosper customer credit score is 710. 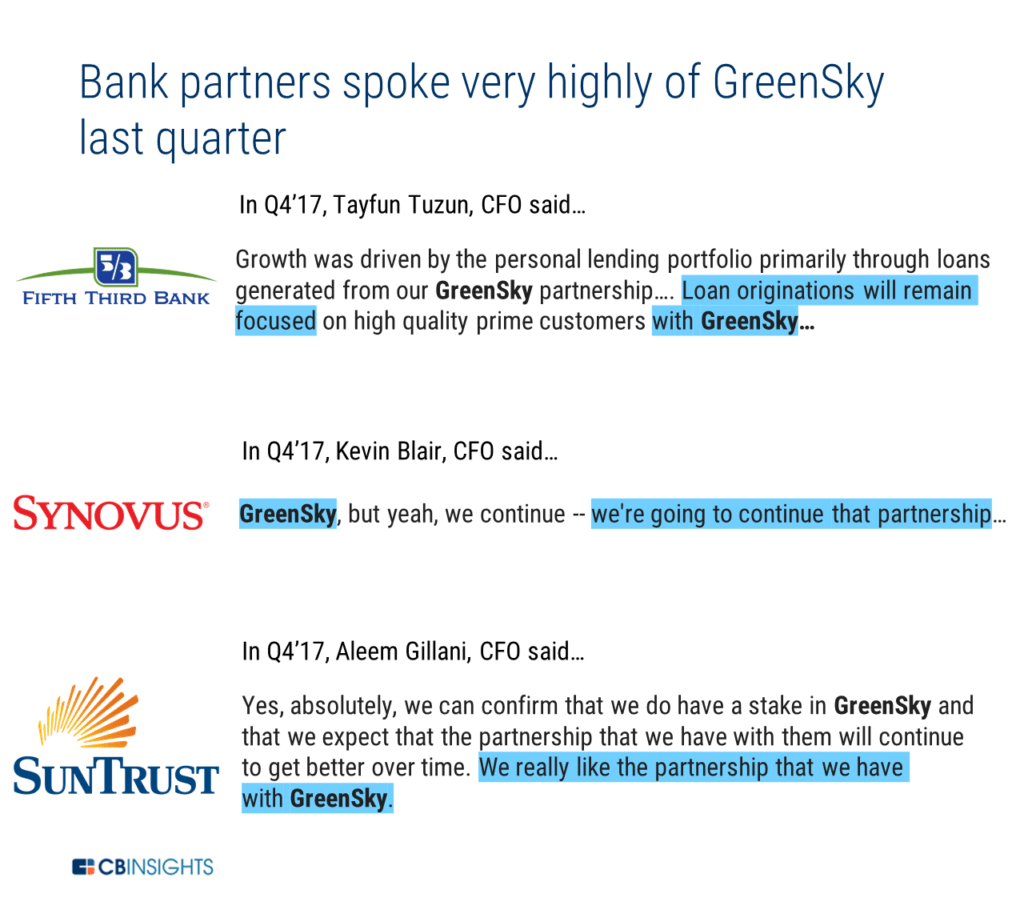 5. GreenSky has stayed out of the (NEGATIVE) limelight

Over the last several years, the alternative lending industry has consolidated with a wave of acquisitions, mergers, and shutdowns taking place in the space. Recent acquisitions include Orchard (by Kabbage) and Earnest (by Navient).

In the same period, a number of alternative lenders have stirred significant controversy and bad press. These include Lending Club (which pushed out former CEO Renaud Laplanche amid an ethics controversy), Prosper (which had a system error overstate returns), and others who have had to pay fines for deceptive practices. GreenSky has avoided such controversies to date, which could help entice public market investors. 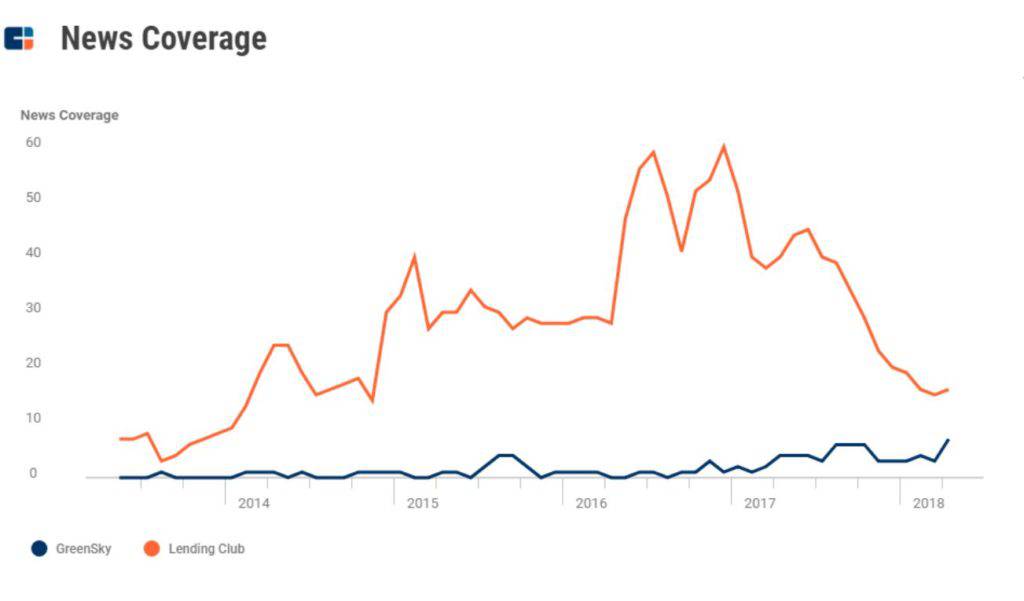 GreenSky is similar to other highly valued fintech unicorns in a few areas.

Like others, GreenSky has stayed private for a long time (12 years) and would be the first venture-backed US fintech company valued at $1B+ in the private markets to go public since Square.

But GreenSky is also different in a lot of ways, including profitability and strong margins. Such factors should help GreenSky make a stronger case to investors in spite of the poor performance of the now-public alternative lenders.