Google’s interest in healthcare is well-documented. The company has not only invested in companies such as 23andMe and Flatiron Health, but also co-founded Verily Life Sciences, focused on data in healthcare, and Calico, an R&D company dedicated to anti-aging research.

Using our patents search engine, we have unearthed a newly granted Verily patent (original application February 2014, granted 05/08/17) that appears to offer a non-invasive system for diagnosing a diverse array of medical conditions, including hormonal issues, infections, and even cancer. The system uses a wearable device to monitor and asses a substance that is inserted or ingested into body. By monitoring the types of particles the substance is interacting with, the system is meant to be able to alert the device owner of potential medical conditions.

Granted just last week, the specific patent is for a contrast agent, likely similar to contrast dye, a substance which is injected prior to an MRI. Composed of “engineered particles,” the injected substance described in the patent is intended to interact with analytes in the blood, such as antibodies. This interaction is then meant to be detected by a wrist-mounted device for the purpose of diagnosing any number of medical conditions.

Officially titled “Engineered particles with polarization contract and alignment control for enhanced imaging,” the patent involves the use of electromagnetic radiation transmitted through the skin to interact with “engineered particles” in the blood tied to specific analytes, such as antibodies, DNA, peptides, or proteins that would indicate a potential disease or medical condition. The engineered particles can be introduced into a person’s blood stream by, “injection, ingestion, inhalation, transdermally, or in some other manner.”

The radiation-emitting device, worn on the wrist, detects how the particle responds to a pulse of energy from the device, and determines whether it is attached to an analyte such as a cancer cell. The device then displays the result, as shown below. 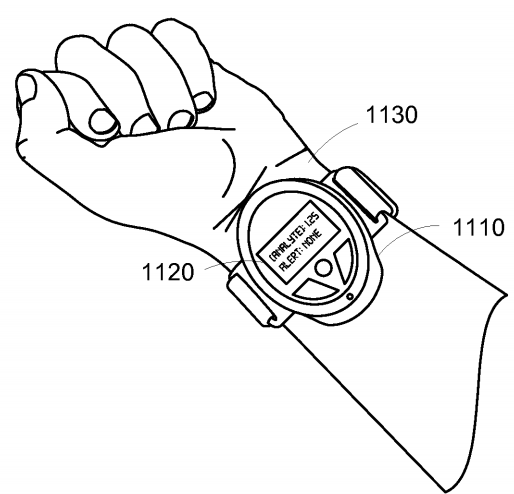 The particles are stated to include fabricated materials, molecules, conductive nanorods, viruses, and even quantum dots, also known as “artificial atoms.”  Further, the particles will be designed to remain in the vasculature or body fluids for extended periods of time.

Key to their design will be 3 segments: an optical absorber, an energy emitter, and a bioreceptor, described below. (Image from Verily patent. Text descriptions provided by CB Insights.)

Physiological data collected from the user will be transmitted to a remote server, which may include a mobile device, computer, the cloud, or other remote system. Potential biomarkers capable of detection include blood pressure, pulse rate, respiration rate, and skin temperature. The readings will then be compared to known normal parameters and, if abnormal, will generate recommendations for the user of the device. The data will also be remotely downloadable by the physician.

The patent also notes that the system could potentially be used to actually target and potentially cure an identified condition, noting the system can be used to “destroy, damage or otherwise modify a specific target in a body, such as anti-tumor therapy or targeted chemotherapy.”