Although a relatively new kid on the block, Google Ventures has become a prominent player in VC. We've updated our "teardown" of the firm's strategy and portfolio.

Founded in 2009, Google Ventures has quickly established itself as one of the more high-profile names in venture capital today and the most active firm in corporate venture capital.

In June 2014, we dove into the firm as part of our Google Ventures “teardown.” The original brief received lots of interest, including from Google Ventures Managing Partner and Uber investor David Krane:

Since then, Google Ventures has continued to invest at a rapid clip across tech and healthcare in areas including satellite data, cybersecurity, and telemedicine. It has also been bolstered by its participation in prominent financings and exits.

We’ll discuss trends and highlights in Google Ventures portfolio over the past few years by analyzing the following dimensions:

A few of Google Ventures’ recent new deals include:

A few of Google Ventures’ recent notable deals include:

If you’d like to see more, we’d earlier detailed Google Ventures’ top 10 biggest deals (which has since changed given Uber’s latest funding).

Below is a graph of Google Ventures’ monthly investment participation (deals & funding) over time from their profile on CB Insights.

A diverse array of exits

Many of these have been smaller acquisitions of early-stage portfolio companies including Predilytics, Objective Logistics, Rekindle and tenXer. But Google Ventures did notch two IPOs in Q4’14.

The firm’s recent exits have been all over the map, in terms of both industry and size.

The firm’s exits with disclosed valuations are plotted on the below scatterplot taken from Google Ventures’ CB Insights profile.

Here are a few of the big players in Google Ventures:

Bill Maris is Managing Partner at Google Ventures and is regarded as the founder of the corporate venture unit in 2009. His investments include Nest Labs, Uber, and 23andMe. He sits on the boards of Nest Labs and biotech company Adimab and has a particular interest in next generation life sciences and artificial intelligence, evidenced by his idea to create Calico, a biotech company focused on fighting human aging.

Joe Kraus, co-founder of Excite and JotSpot, is General Partner with investments in the likes of Kabam, TuneIn, and Pocket. He has also been an active angel investor in several companies, such as LinkedIn, Aardvark, Kongregate, and OpenCandy. Kraus is on the board of the Electronic Frontier Foundation, Clean Power Finance, and MyLikes.

Rich Miner, co-founder of Android, is a General Partner and leads Google Ventures’ East Coast investment team. His investments include MessageMe, Enterproid, CustomMade, and Hubspot. He sits on the boards for Crittercism, EnglishCentral, VigLink, and Recorded Future.

Krishna Yeshwant, leads Google Ventures’ investments in the digital health and healthcare sectors, where he sits on the boards for Flatiron Health, DNAnexus and One Medical Group.

Between 2010 and 2013, Google Ventures decreased its investment in social media companies and switched to more “enterprise-y” areas, as evidenced by its funding of Cloudera, DocuSign, and Hubspot. Between 2010 and 2013, Google Ventures also increased investment in video and health apps, as evidenced by their fundings of Vungle, Jumpcam, and FitStar Labs.

Flash-forward to 2014 and we see that Google Ventures has placed a large strategic emphasis on cybersecurity. As virtual threats increase, Google Ventures has bet on a number of upstarts including Duo Security, Ionic Security, Threatstream and Synack. Google Ventures has also made a broader push into digital health in recent quarters. Recent investments in this category include Transcriptic, Spruce Health and Flatiron Health.

Our Industry Heatmap below shows the distribution of investments in the internet software and services space by subindustry, with 2010-2011 on the left, 2012-2013 in the middle and all activity since on the right. Each box’s size represents deal count and color darkness represents funding volume.

As in prior years, the majority of Google Ventures’ investments still take place in California. In 2012 and 2013, Google Ventures increased its investment pace in Massachusetts. The firm participated in rounds totaling $87 million across 10 deals in Massachusetts between 2010 and 2011, and this jumped to $212 million in 28 deals between 2012 and 2013.

Since then, Google Ventures has doubled-down in New York, completing 16 deals. Most notably, the firm led a $130M investment to oncology data analytics firm Flatiron Health in May 2014. Google Ventures has also seeded nine New York startups including LedgerX, Abacus Labs, Clarifai, and Bowery. The corporate VC also participated in a $10M Series A to Cockroach Labs.

While all stages of investment have seen increases over the last five years, the biggest growth has been in the early rounds, with 66% of deals taking place in Seed or Series A rounds over the past five years.  Google Ventures is the most active corporate venture capital firm at the seed stage so this is not entirely surprising.

The chart below from CBI’s Investor Analytics shows the proportion of Google Ventures’ new investments vs. follow-on investments in each quarter for the past five years. 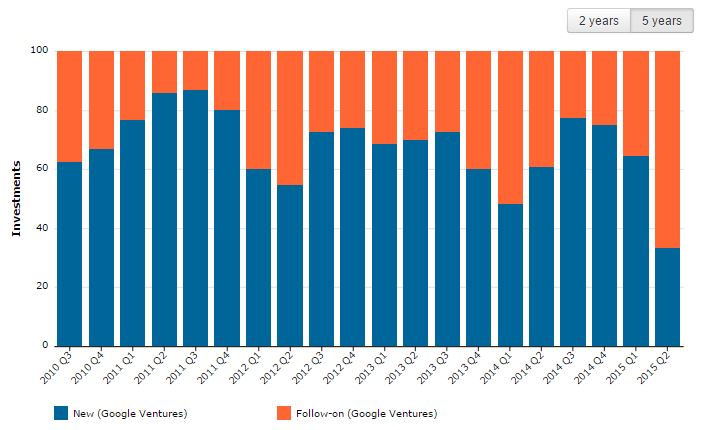 Below is a graph from the Investor Analytics tab on CB Insights that shows trends in Google Ventures’ median deal size. 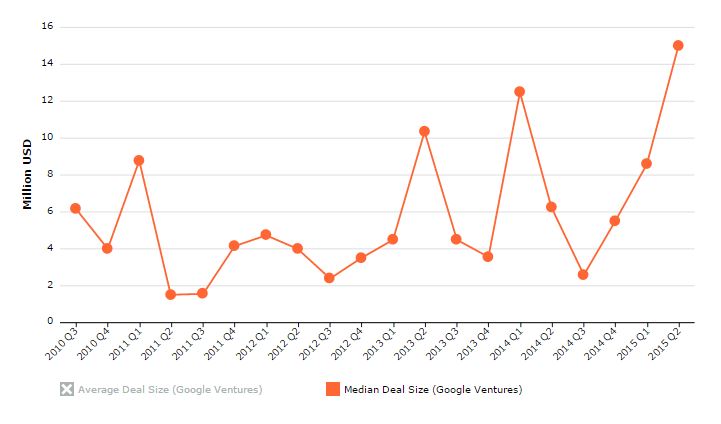 If you’d like to read more about Google Ventures’ investment syndicate, check out our analysis here.