Research Brief
1553
Google Ventures seed portfolio includes notable companies including Optimizely, Zen Payroll and Hired among others. Versus other smart money VCs, its seed follow-on rate is in the middle of the pack.

When it launched, Google Ventures was lauded for its algorithmic approach to venture investing. The corporate venture arm has invested in many private companies valued at over a billion dollars – at the late-stage primarily.

So how has Google Ventures’ done at the seed stage? Has its algorithmic approach to investing proven fruitful. As context, an article from the NY Times revealed a bit of the firm’s data-driven approach:

To make its picks, the company has built computer algorithms using data from past venture investments and academic literature. For example, for individual companies, Google enters data about how long the founders worked on start-ups before raising money and whether the founders successfully started companies in the past.

It runs similar information about potential investments through the algorithms to get a red, yellow or green light.

We decided to analyze Google Ventures 100+ seed investments to understand:

To analyze Google Ventures’ seed follow-on rate, we looked at any seed investment it did between its inception in 2009 and September 2013 (to ensure the seed deals had enough time to mature). Based on the data, Google Ventures saw 67% of its seed investments in that period either go on to raise Series A funding or be acquired.

Among 16 other brand-name VCs including Sequoia Capital, NEA and Andreessen Horowitz, Google Ventures’ follow-on rate was was average. 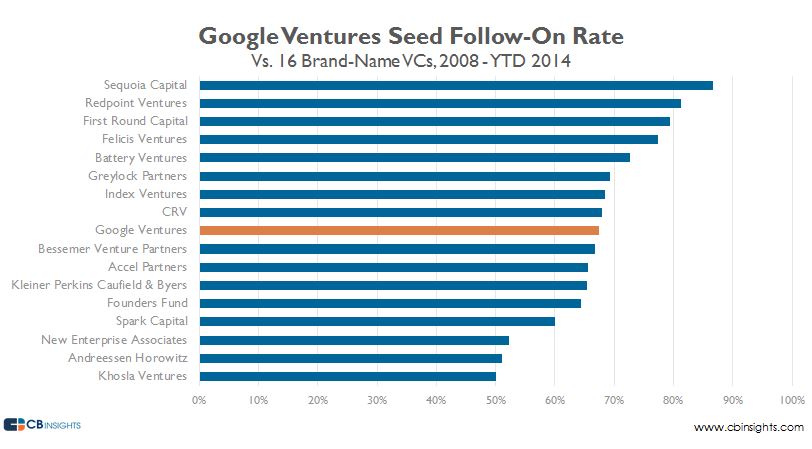 A/B testing company Optimizely, has raised the highest amount, raising $85M in cumulative Series A and Series B funding. Other well-funded Google Ventures seed investments include Crittercism, Clever and Hired, which just raised a $15M Series B at a $200M valuation. Other Google Ventures-seeded companies recently valued at $100M include payroll software firm ZenPayroll and mobile game video recorder Kamcord.

Looking for more data on Google Ventures and other top corporate venture capital units? Login to CB Insights or create a free account below.