Google wants to connect your lights, your fridge, your irrigation system, and more to help you get to work on time, exercise more — and maybe even yell less.

Google wants to take your smart home to the next level.

Since 2013, the tech giant has filed 125 patents related to the smart home, and over time, has acquired or released a slew of smart home devices — including the Nest thermostat.

But beyond automating everything from room temperature to entertainment systems, the company’s recently granted patent points to a more ambitious strategy for connecting homes in the future.

The patent envisions a reality where smart devices — along with the data they collect — help inform household decisions based on “sensed observations.”

Sensors, for example, would collect information about household member activity and their “goals” in order to suggest and implement policies. This might include turning off the TV when a child has been watching it for too long, or collectively using 5% less energy within the home.

While the patent aims to encourage more efficient use of smart devices, as well as more specific use, the system outlined in the patent could spark privacy, consent, and security concerns.

Below, we take a look at how this patent works and why it matters.

How the Google patent works

Google’s patent, filed in October 2018, aims to help households achieve “goals” by sensing, analyzing, and reporting on certain data collected by smart devices around the house. These goals could include eating fewer calories, spending more time outside, yelling less, or spending fewer hours on the internet.

Goals could be suggested by household members (ie parents setting restrictions for their kids) or by computing devices (based on household member interactions with smart devices).

The manager, which acts like a central monitoring system, connects to all of these sensors and uses them to assess who is in the room, what they are doing, how they might be feeling, and how it relates to their pre-determined goals. 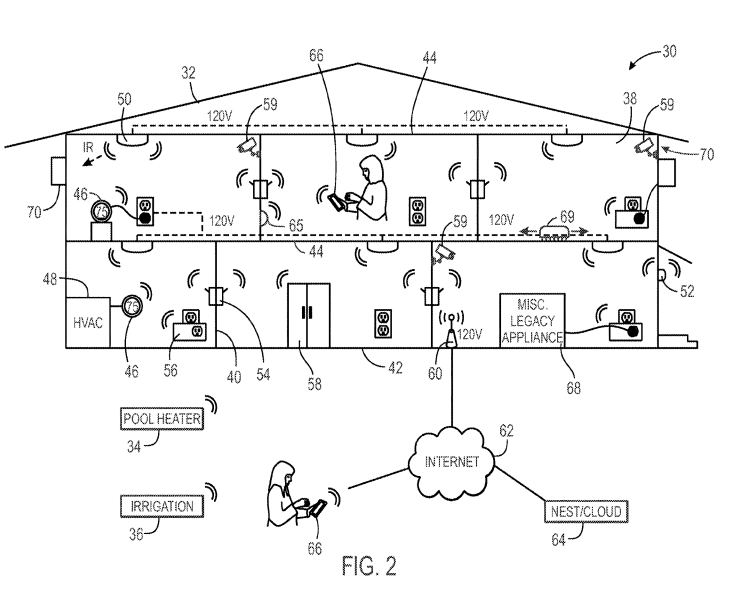 One example describes the manager’s ability to “dynamically adjust an alarm clock … based upon traffic delays, etc.” to help a household member achieve the goal of getting to work everyday by a certain time (say 8AM).

In the below example, the household system uses microphones and videos within smart devices in a bedroom to identify that Sidney is alone in the house, and then triggers an action — in this case, the front door locks and remains locked until another recognized figure returns home. 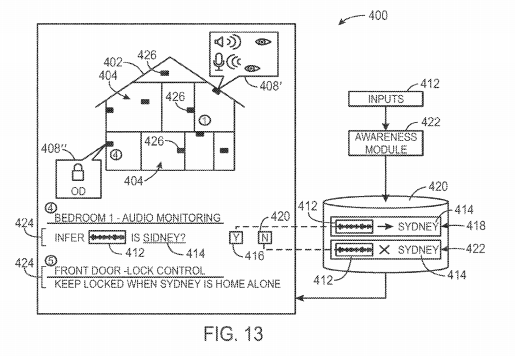 A traditional smart lock typically allows entry/exit manually via a smartphone app or a keypad. Google’s policy manager, on the other hand, would automatically lock the door based on who is in the house and when, potentially removing human error (like forgetting to lock the door).

One of the benefits of the household policy manager is the ability to track and monitor children without parental supervision. The system could be used to alert parents when children are alone in the house, track how they are behaving, and control their electronics usage. 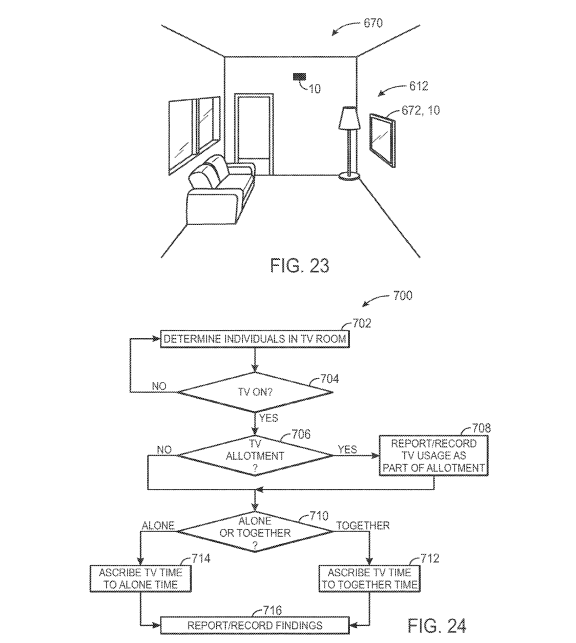 The above example shows how the sensors could be used to enforce certain policies. For example, if a couple decides to watch only one hour of television per day, the household policy manager could automatically shut off the television after the couple has hit its allotment. If no goal has been set, the sensors could record findings that could help inform future viewing policies (ie what type of content to watch, how long, etc).

The policy manager could also detect which household members are watching TV, and change permissions based on who is in the room. If a child is watching TV without parental supervision or with a babysitter, the system could track what the child is watching and for how long. It could then report or control the behavior, like blocking certain channels or turning off the TV after a certain amount of time. 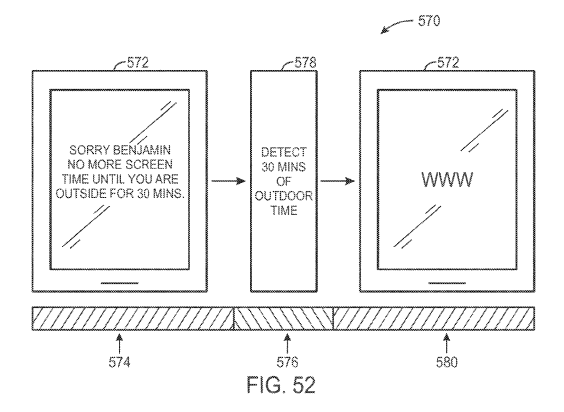 Why the Google patent matters

Consumers are adopting more and more “smart” items within their households, from thermostats that automatically adjust the temperature to refrigerators that let you know when they are running low on kale.

For each smart item brought into the house, families add more complexity in monitoring & maintaining the ecosystem. Google claims that its new policy manager would remove the maintenance of each individual smart device and instead make goal-setting a focus for households.

According to Google’s patent filing,

“As society advances, households within the society may become increasingly diverse, having varied household norms, procedures, and rules. Unfortunately, because so-called smart devices have traditionally been designed with pre-determined tasks and/or functionalities, comparatively fewer advances have been made regarding using these devices in diverse or evolving households in the context of diverse or evolving household norms, procedures, and rules.”

The tech giant believes its system would allow these smart sensors to adapt as households change.

However, there are potential concerns around what this patent could mean for the future, especially as we move towards a more connected society.

For one, these sensors would be used to identify highly personal and sensitive information about users, like when they are arguing with raised voices, when people enter or exit the house, or even if household members eat together or separately, and how often. Access to this kind of information could cause questions surrounding the use of this data.

The patent, however, does outline the ability to disconnect these policy managers from the internet, blocking external communications while still allowing the system to function. This, the patent asserts, could help to alleviate any data privacy concerns.

Further, many of the examples outlined in the patent revolve around gathering a wide range of information on children, which could spark concerns around the treatment of the data of minors.

Another concern could be the manipulation of the policy manager system by hackers or bad actors. Someone with access to the whole household system could use its power to track household members or change household policies. For example, someone could hack into the system to gain control of all cameras in the house, unlock doors, disable alarms, and more.

Additionally, system malfunctions could occur. For example, if a smart oven is turned on accidentally, this could increase risk of a disaster.

Though Google has not yet indicated that it plans to release a product based on this patent, the company may receive push back before rolling out a system of this nature.

For more about Google’s smart home patents, check out how the company could turn your bathroom mirror into a medical device.