Google more than doubled pharma investments in each of the last two years.

Google’s interest in healthcare is not new, and the company has invested in dozens of healthcare startups in the past. Now, the tech giant appears to be laying the groundwork for a future in pharmaceuticals. It’s attacking this industry from two directions, including direct investments and internal development of pharma-targeted efforts.

Regarding the former, Google has made 17 deals to pharmaceutical startups in the past 3 years, all through its Google Ventures investment arm. This is a shift given that from 2009-2014, the company only completed 7 deals. Thus far in 2017, Google has already participated in 6 pharma deals via Google Ventures. Recent first-time deals completed in 2017 include Fulcrum Therapeutics (gene therapy), Arsanis (anti-bacterials), Spero Therapeutics (anti-bacterials), and BlackThorn Therapeutics (neurobehavioral disorders).

Below is a chart showing Google’s investments into pharma companies since 2009. 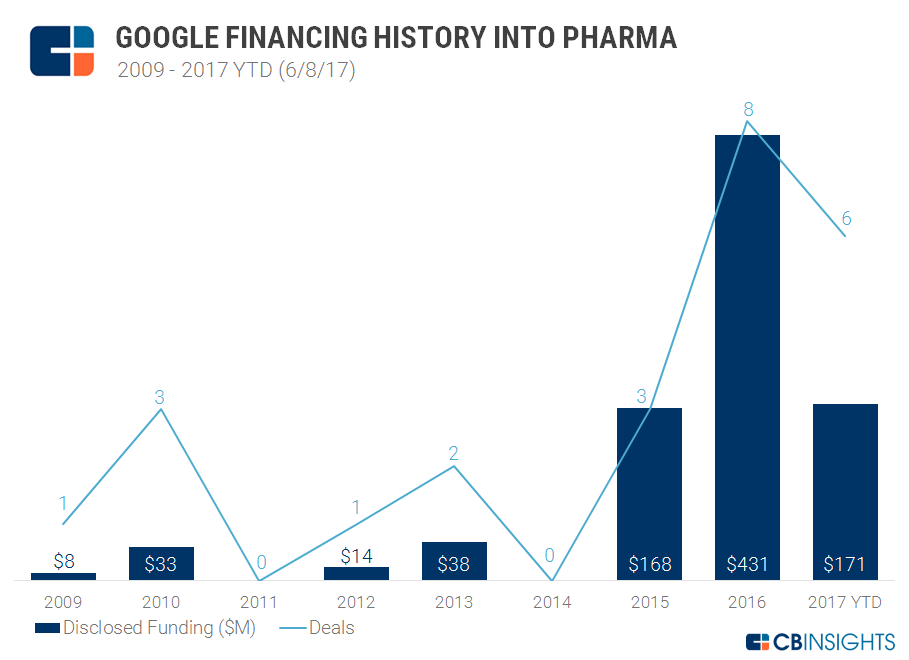 The factors behind this surge of investment are two-fold.

Google’s internal pharmaceutical pipeline is still in its very early stages. Verily and Calico are both engaged in numerous partnerships with ambitious goals. Examples include Calico’s partnership with C4 Therapeutics to develop therapeutics targeting protein degradation and Verily’s partnership with GlaxoSmithKline to develop implanted devices that treat disease by modulating electrical signals to peripheral nerves.

To view all pharmaceutical startups tracked by CB Insights, check out the Pharma Startups Collection and see the tag #google-backed, to find the specific companies Alphabet is related to.