Is Google’s business model no longer unassailable? According to CB Insights data, venture investments into internet and mobile search companies are on the rise again, topping over 50 deals in the past two years.

Since Google’s IPO, venture capital investors haven’t had much luck with investments in the search category. Blekko, an alternative search engine, had raised $56M since 2007 from investors including US Venture Partners and CMEA Capital but hadn’t gained widespread adoption and just sold its assets to IBM.

Another search engine, Cuil, launched in 2007 with much hype as it claimed to index pages significantly faster and cheaper than Google and raised $33M to do so. Three years later, Cuil found itself in the deadpool. Mahalo and Chacha were two others that raised tens of millions beginning in 2006-2007 have floundered and lost their initial mojo.  Neither have seen an exit (Mahalo has since pivoted to mobile news app Inside.com).

The bumpy track record of search challengers and Google’s dominance on web search resulted in little investment in search for the early 2000s.  The chart below highlights the investment trend to U.S. Internet and mobile search companies since 1999, when Google raised its single $25M investment from Kleiner Perkins Caufield & Byers and Sequoia Capital. It IPO’d at a $23B valuation in 2004. 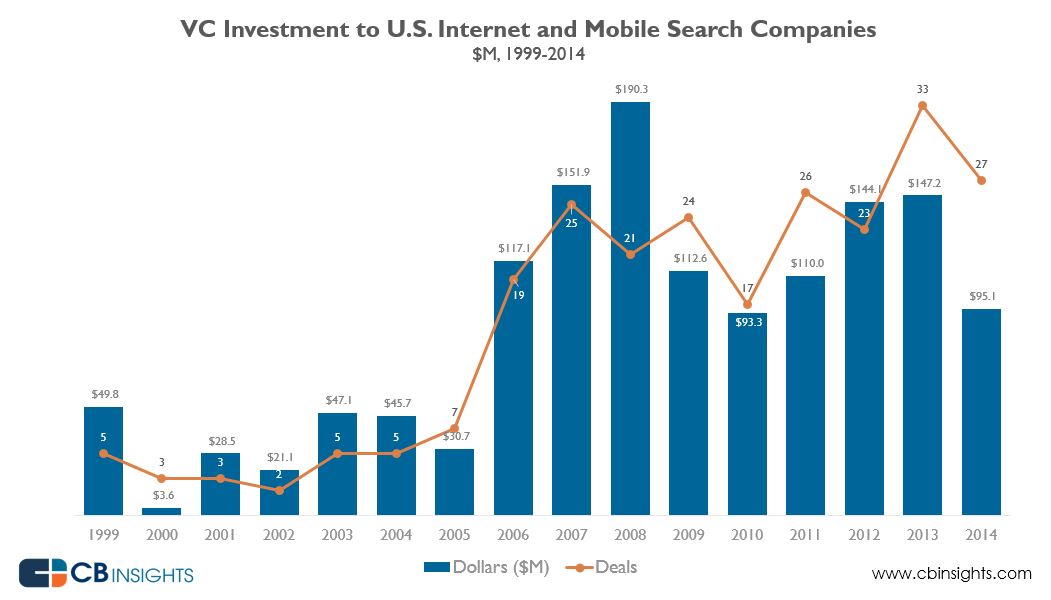 However, as of late, search is back en vogue.

Within search investments, mobile search companies are seeing the biggest jump in deal activity. As smartphone users increasingly navigate via apps instead of the mobile web, companies like mobile search engine Vurb and Alibaba-backed Quixey have garnered funding.

As the chart below highlights, deal activity to mobile search / deep linking firms hit a multi-year high in 2014. Several of these companies are engaged in what’s called deep linking, creating new ways to mimic web links by allowing users to go directly into different parts of a mobile app and gaining valuable data on where those users came from. Google itself funded one such deep link search startup, URX, via its corporate venture arm Google Ventures. 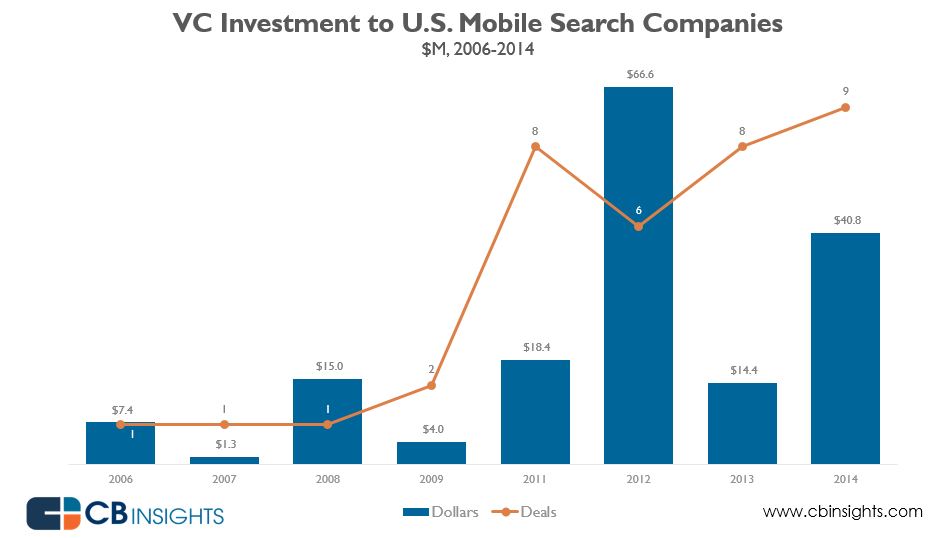 Still, search remains a very small category by total investment and deals compared to areas like the on-demand economy and ed tech. But as the spate of early-stage investments in mobile search matures, the area could see see funding totals increase as well as the entrance of more startups. Below are five companies that received funding in the last year operating in the mobile search category.

Want to identify other search companies going after Google? Sign up for the CB Insights Venture Capital Database free below.