As Google announces its pending $2.1B purchase of wearables manufacturer Fitbit, we visualize the tech giant's top acquisitions.

Over 12 years ago, tech giant Google announced its largest acquisition since it incorporated in a Menlo Park garage, paying $1.7B for YouTube, a video platform that at the time had fewer than 100 employees.

Since then, Google’s checkbook has opened wide (as we highlighted in our deep dive into Google’s M&A strategy), with some 250 acquisitions announced over the past decade.

Using CB Insights M&A data, we made a visual timeline of the largest acquisitions in the company’s history. See the list of top 10 below. 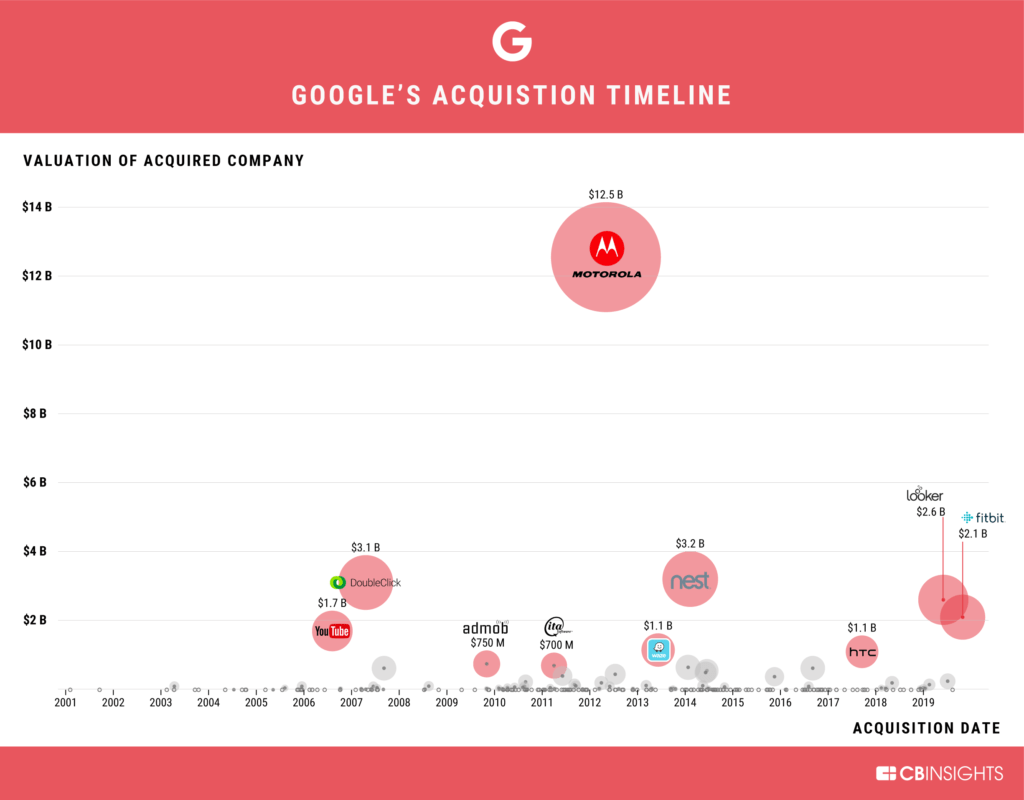 1. Motorola Mobility ($12.5B, 2012) remains Google’s largest acquisition to date. In October 2014, Motorola was sold to Lenovo for less than a quarter of its acquisition price (approximately $2.9B).

3. DoubleClick ($3.1B, 2007), an ad serving company, was Google’s largest acquisition at the time, and was intended to complement Google’s existing ad business. The deal has been instrumental in giving Google a foothold in the lucrative display advertising industry, allowing the company to facilitate programmatic ad-buying through its own ad exchange.

4. Looker ($2.6B, 2019) is a California-based business intelligence platform whose recent acquisition further signals Google’s current focus on growing its cloud offerings. Announced in June 2019, the deal is expected to close by the end of the year.

5. Fitbit ($2.1B, 2019), a global leader in consumer health wearables, is the most recent of Google’s top 10 acquisitions. Google acquired the company about 4 years after Fitbit went public on the NYSE. In 2018, Fitbit sold 14M devices and had nearly 30M active users worldwide. Google expects the acquisition to strengthen its Wear OS efforts as it attempts to catch up with Apple.

6. YouTube ($1.7B, 2006), a leading video-sharing platform, was Google’s first $1B+ acquisition. Through this purchase, Google anticipated the shift from traditional media like TV to online viewing, while also increasing its traffic and growing its ad business.

8. HTC – Pixel Smartphone Division ($1.1B, 2017) is a Taiwan-based consumer electronics manufacturer. While the acquisition did not include any production facilities, it left Google with a significant part of HTC’s smartphone team (underlining the Android maker’s focus on competing with iPhone maker Apple) and helped Google establish a manufacturing presence in Taiwan.

9. AdMob ($750M, 2009), a mobile advertising company founded in 2006, was purchased by Google in anticipation of the massive proliferation of mobile ads.

10. ITA Software ($700M, 2011), a US-based airline IT and services provider, was acquired by Google to expand the tech giant’s search capabilities and to power Google Flight Search.