2016 was the year of AI, as financing to startups in the field rocketed to a record $5B across more than 650 deals. In addition to investments, tech corporations like Google have been in a rush to acquire AI startups to stay abreast of developments in the space, while also pouring resources into internal artificial intelligence R&D efforts.

In our “Big 5” Patents Report, we studied the patent application trends of Amazon, Apple, Facebook, Google, and Microsoft to compare the research activities of these tech giants in this red-hot field.

Just as financing to startups working on AI and machine learning technologies has spiked, the patent activity of these corporations within this key tech battleground has also rapidly increased in recent years.

Microsoft leads the pack with over 200 AI-related patent applications since 2009, while Google comes in second with over 150. Google overtook Microsoft in the most recent year of complete records (2013), though it remains to be seen how 2014 and on will play out as patents applied in those years are still being published.

Apple, widely criticized for being slow to the draw in this field, came in last with the least AI-related applications from 2009 to date. The iconic hardware company has seemed to acknowledge this gap, hiring Russ Salakhutdinov from Carnegie Mellon as their new head of machine learning, perhaps also signaling that the company knows it needs to make a stronger effort to showcase its AI research. 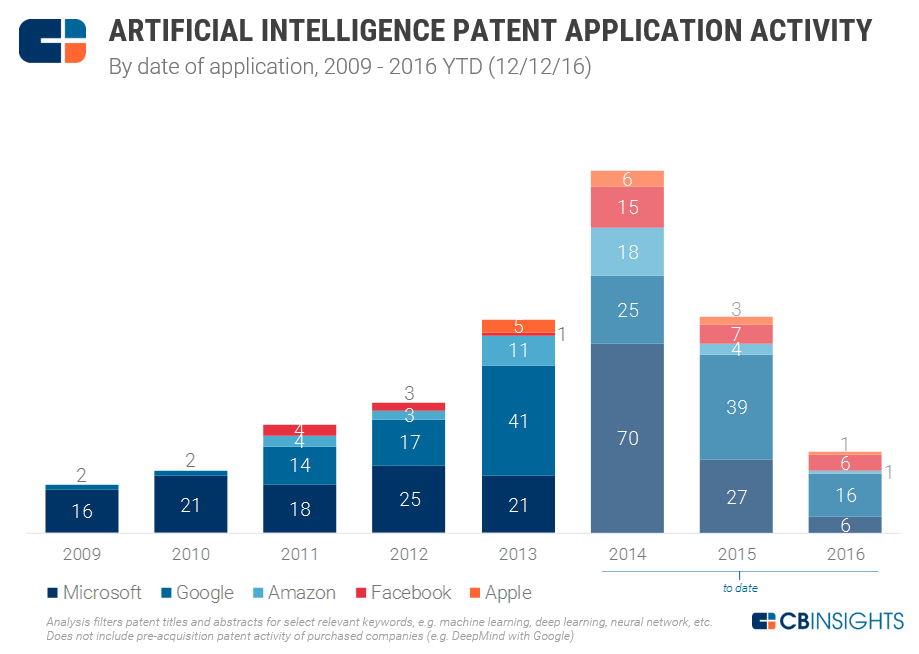 Looking for more data on AI patent activity? Sign up for the CB Insights tech market intelligence platform for free below.