While Google leads the US tech giants in equity investments, Microsoft and Amazon have increased their investment activity since 2015.

Startup investments by the biggest US tech companies grew in 2016, as Microsoft and Amazon stepped up their activity. Notably, in May 2016 Microsoft officially launched a new fund, Microsoft Ventures. Amazon also ramped up activity with its Alexa Fund, a voice interface-focused fund launched in 2015. Google, meanwhile, slowed its investment activity in 2016, but still remained the top private market investor among the 5 biggest tech companies.

Despite the growth in equity deals, M&A among top tech companies has been declining, and non-tech companies led some of 2016’s largest acquisitions. Using CB Insights data, we analyzed the private market activity of the five largest US tech companies by revenue (based on the Fortune 500 list) — Google, Amazon, Facebook, Microsoft, and IBM — and their associated venture arms. We do not include incubator/accelerator programs, such as Microsoft Accelerator, and we do not include investments made through non-Google entities under the Alphabet umbrella, such Alphabet’s life science arm Verily.

From 2012-2016, the top five US tech companies invested in 420 private companies, led by Google (Alphabet), which backed 333 startups through its various venture arms. The vast majority of Google’s investments come through GV (fka Google Ventures), which backed 294 startups throughout the five-year period, while the company also made strategic plays through Google and through its growth equity fund CapitalG (fka Google Capital).

While GV makes far more investments, Google has participated directly in larger deals. In particular, Google participated in a $1B Series D to aerospace company SpaceX in 2015, and a $542M Series B to augmented reality startup Magic Leap in 2014. GV’s largest deal was Uber’s $258M Series C in 2013. For more on Google’s investment strategy, new leadership at GV, and slowing deal pace, check out our full 7,000+ word teardown.

In second, Microsoft invested in 39 startups over the time period. It nearly doubled the size of its portfolio in 2016, when Microsoft launched Microsoft Ventures and used it to invest in 19 companies. According to the company, it plans for Microsoft Ventures to focus on companies that can “complement and leverage the transition to the cloud,” and its investments so far include startups such as business analytics startup Paxata and enterprise communication platform Dynamic Signal. Microsoft also reorganized its accelerator program in 2016, and forged relationships with a large number of startups under the new Microsoft Accelerator. We do not include Microsoft’s accelerator activity in this analysis.

Amazon launched a new fund in 2015, the Alexa Fund, to invest up to $100M in companies focused on voice control technology. The Alexa Fund backed 18 startups since launch, ranging from smart home startups like Ecobee to wearables startups like Thalmic Labs. In addition, since 2012 Amazon itself has invested in 19 startups.

IBM’s investment activity has been low, with just 3 investments in 2014, 2 in 2015 (both through IBM Watson) and 5 in 2016. Apple, which has made dozens of acquisitions since 2012, made just one disclosed equity investment. However, it was a big one — a $1B investment into China’s Uber competitor Didi Chuxing. The graph below shows the investment activity of these tech companies and their associated venture arms by year. 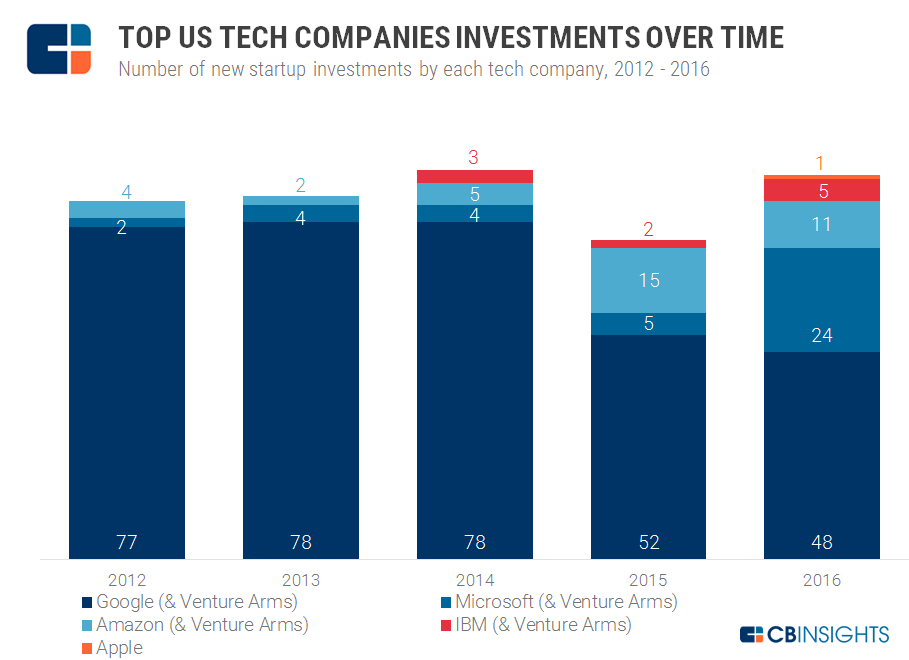 GV leads in total investments since 2012

Looking at the specific investment units within each company, GV’s lead is substantial. Since 2012, GV has invested in 294 companies, followed by Google’s CapitalG with 23 investments. The chart below highlights the full list of entities we analyzed, along with the disclosed number of companies they have backed and sample investments since 2012.

Out of the 20 largest investments from these companies since 2012, 15 featured Google or its venture arm. GV’s deals spread across a range of industries, from health insurance through Oscar, to communications through Slack, to big data through Cloudera.

We used our CB Insights business social graph tool to visualize these companies’ investment and acquisition activity since 2015. It’s notable that Apple, which made just one investment into Didi Chuxing, acquired 19 startups over the same period. The tech giants on our list have relatively distinct portfolios with very few co-investments. However, cybersecurity company Ionic Security, which raised over $122M to date, counts both Amazon and GV among its backers, as does home Wi-Fi management platform Luma Home. 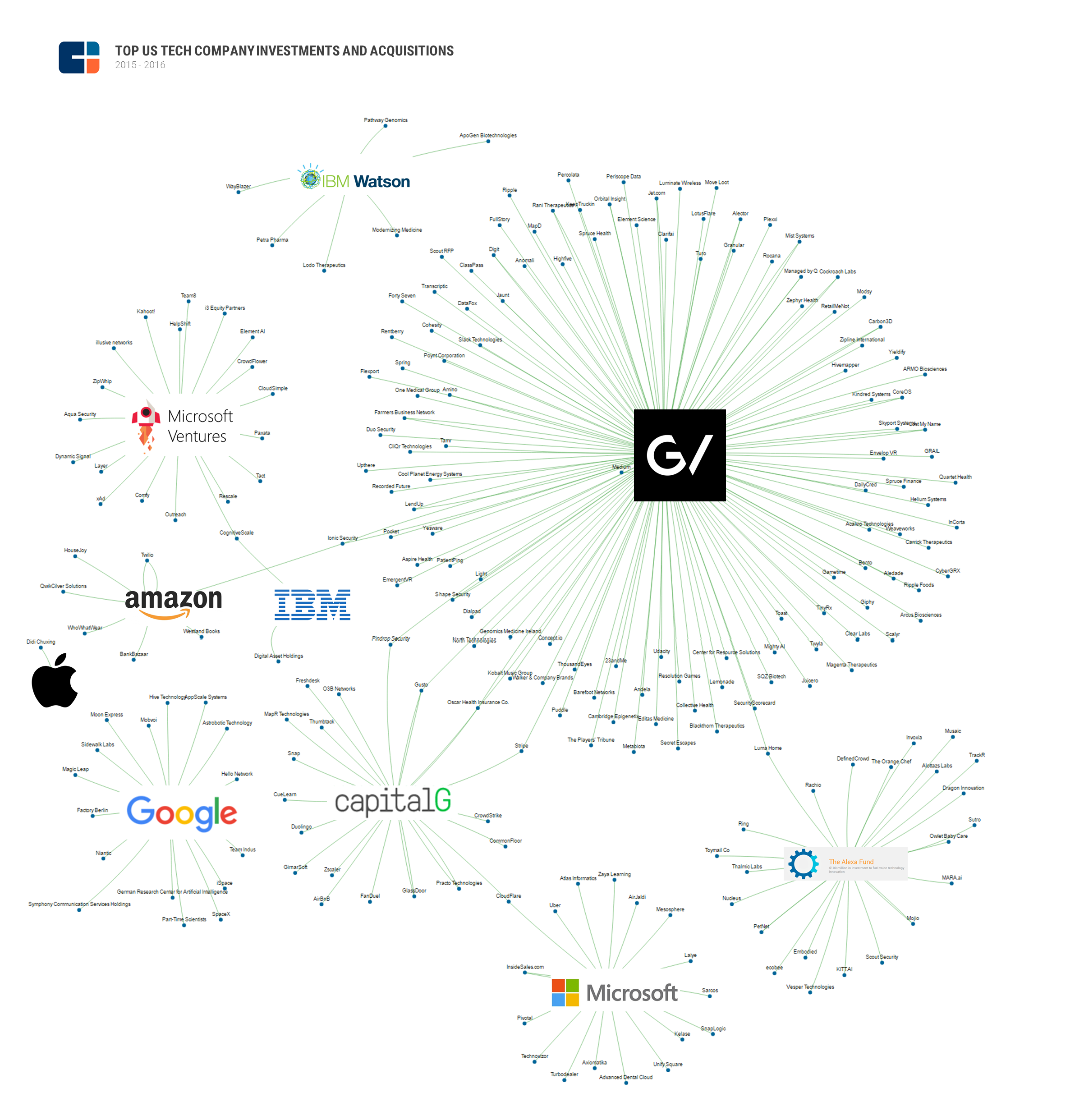 Amazon’s investments have been most geographically diverse

Out of the top US tech companies, Amazon has made the greatest proportion of investments in non-US startups, thanks to a number of deals in India, Canada, and the UK since 2012. In fact, the largest deal Amazon participated in since 2012 was the $120M Series B to Thalmic Labs, a Canada-based startup behind the Myo gesture control armband. For comparison, nearly three-quarters of Microsoft’s portfolio is US-based, as is 94% of Google’s portfolio and 100% of IBM’s.

Apple’s one equity investment since 2012 was to China-based ride-hailing company Didi Chuxing. 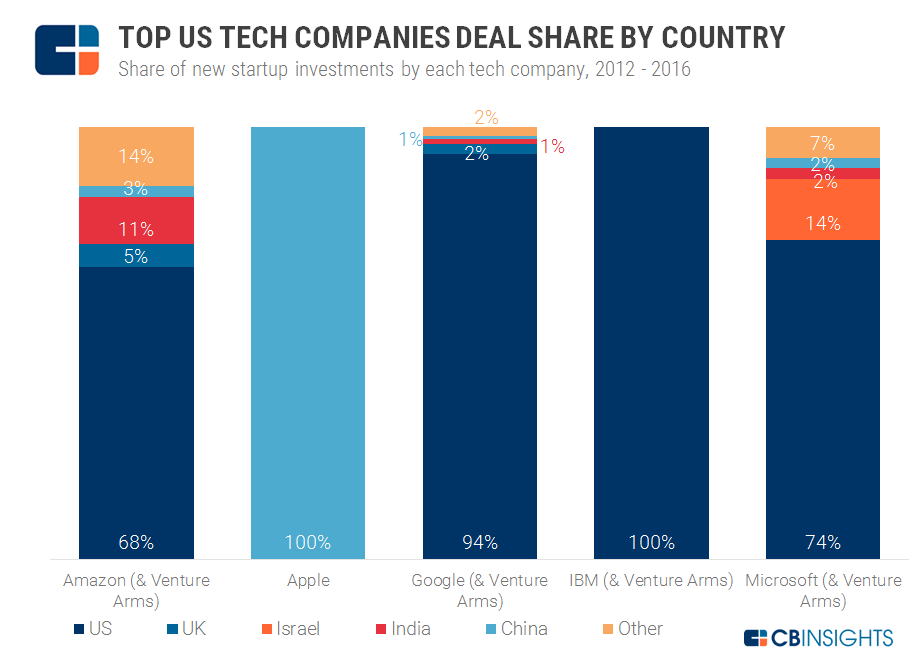 Want more data on corporate investors and tech startups? Log in to CB Insights or sign up for free below.