Unmanned marine vehicles will use sensors & AI to crisscross the world’s oceans without a crew – potentially lowering costs & improving safety for the $334B shipping sector.

Just as driverless cars and trucks are bringing huge changes to the auto industry, and drones are disrupting everything from emergency response to conservation, autonomous ships are becoming the next major transportation innovation.

A number of startups and governments are piloting “unmanned marine vehicles” or crewless cargo boats, with the potential to disrupt the $334B shipping industry.

Fully autonomous ships aren’t yet allowed in international waters. But with more and more companies (and governments) developing driverless vessels, the UN is considering policy changes that would allow unmanned boats to crisscross oceans, signaling a major sea-change to the global rules governing transport.

That means “crewless cruising” by cargo vessels could take over the shipping industry sooner than you think. Already, there is a “ghost ship” that is expected to be ferrying cargo for commercial use as soon as 2020.

The benefits of crewless cargo ships could be significant.

A boat with no crew has no need for sleeping quarters, kitchens, or bathrooms, and can devote more of that space to products for transport; crewless shipping boats also don’t incur the costs associated with keeping people at sea for long stretches.

Autonomous ships will not only enhance global shipping capacity (lowering transport costs and fuel consumption in the process), they can also potentially lead to safer seas: Human error accounts for over 60% of shipping accidents, according to EU data.

Using vast networks of connected data sensors (and many of the same technological systems found in driverless cars and aerial drones), autonomous boats will share data and communicate amongst one another to navigate the high seas unmanned.

These crewless vessels will either be operated remotely, like drones (via human control and technical monitoring on land) or self-drive autonomously, like driverless cars (via programmed mapping and artificial intelligence, without any human intervention).

Boats of both kind are right around the corner.

“This is happening. It’s not if, it’s when. The technologies needed to make remote and autonomous ships a reality exist… We will see a remote controlled ship in commercial use by the end of the decade.”

Rolls-Royce’s autonomous-vessel operation is among the most advanced in the space. Rolls-Royce has worked extensively in the shipping sector for decades, but launched the AAWA project as part of a broad vision to make better use of “ship intelligence” – aka the data from ships’ vast networks of systems and sensors.

As part of that vision, Rolls-Royce intends to use a land-based control center (staffed with a small crew of 7 to 14 people) to monitor and control a fleet of remote-controlled and autonomous seafaring vessels around the world. It is also working with Google to develop more robust “intelligent awareness systems” for both existing vessels and the autonomous ships of the future.

The company has already taken its efforts well beyond the virtual realm.

Rolls-Royce did a ghost-ship demo in June 2017 in which an 28-meter vessel berthed itself, undocked, turned 360°, and piloted itself to back to the starting point before docking again — all via remote control, on land.

As part of its AAWA project, the British automaker has also studied the safety, cybersecurity, and liability issues facing autonomous ships.

While Rolls-Royce is a leader in the space, other private companies are also moving towards rapid commercialization of automous shipping vessels:

While much activity is happening on the development side, autonomous cargo ships still won’t have a major impact on the shipping industry until they can cross international waters, since the maritime shipping industry is largely focused on transporting goods between distant countries. Given this constraint, the UN is beginning to have discussions on the topic:

The UN’s International Maritime Organisation (IMO) – which regulates shipping – began discussions in June 2017 that could allow unmanned ships to operate across oceans; IMO will continue to consider changing the “International Convention for the Safety of Life at Sea” (SOLAS) to allow ships with no captain or crew to travel between countries.

Sovereign entities will likely ensure the rules of the sea are rewritten sooner rather than later: The European Union has put $4B into its MUNIN project (short for Maritime Unmanned Navigation through Intelligence in Networks); and DARPA is currently testing its autonomous-submarine the Sea Hunter (which it developed in response to “advancements” China and Russia are making in the space, according to officials).

The 132-foot Sea Hunter is powered by diesel engines and is designed to operate autonomously, for months at a time, without a crew or any human control. Watch the demonstrations of the Sea Hunter below.

Do the benefits outweigh the risks?

Advocates for autonomous cargo boats tout a number of potential benefits to these vessels. 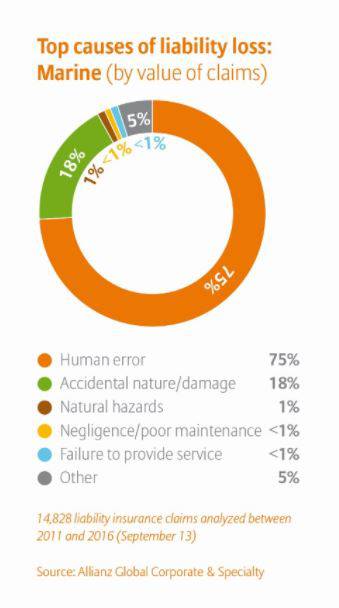 Safety: Insurance data shows that people cause the majority of ship accidents and resulting damages; in 2016, at least 75% of insured marine losses arose from human error, according to the most recent AGCS Global Claims Review.

Costs: Paying a crew can account for almost half of a cargo ship’s expenses. And with no requirement for manned spaces and accommodation, driverless vessels are expected to be cheaper to build with lower operating costs.

Energy: Most vessels in development are either highly energy-efficient or entirely electric, which is good for the environment and potentially cheaper to operate. (The YARA Birkeland, for example, touts zero emissions.)

Piracy Risk: Uncrewed ships can be built so that they are difficult for pirates to board. Even if pirates got aboard, access to controls could be disabled remotely, and authorities could be rapidly notified (via data) to intervene. And with no crew to hold hostage for ransom, the incentive for piracy is fairly low anyway.

But while the benefits may seem obvious, there are significant concerns around just how much money these ships could save, and whether “roboships” should really be considered safer than existing vessels.

Such concerns play into the regulatory considerations: The existing International Regulations for Preventing Collisions at Sea, for example, were written with conventional crewed ships in mind, and provide no absolute “right of way” for vessels. Rule 2, in particular, requires real-time human judgment to avoid immediate danger.

Given the liabilities at stake, modifying long-held marine standards — and removing the role of humans from them entirely — is no small concern to maritime insurers.

Consider the safety issue:  Even though 62% of shipping accidents occur thanks to human error, an estimated 1.65 million skilled workers labor on international merchant ships today. And as Rule 2 shows, their roles aboard those ships are not seen as insignificant.

Many believe that removing experienced crew from ships means that any accidents that do occur could be far more severe (since personnel would not be on-hand to mitigate ship damage or intervene in any resulting environmental disasters).

Ultimately, this creates a number of questions for martime insurers. And how insurers support or resist the commercialization of these vessels, and potentially price policies, will also have an impact on how the industry develops.

Will data be the real advantage?

A recent study by researchers at the Fraunhofer Center for Maritime Logistics and Services weighed the overall potential for driverless ships to reap returns: In an exploratory cost-comparison between an autonomous vessel and a conventional bulk carrier, researchers found that there are indeed savings to be made – mainly around crew pay, accommodations, and utilities.

But new costs factor into play, too. To deploy driverless cargo ships, companies will need to equip their fleets with advanced sensors and control systems. Recruiting a land-based workforce (and expensive new operations centers) will also absorb resources and offset savings.

The expenses add up: Even factoring in the much-improved fuel efficiency of greener autonomous boats, the Fraunhofer Center study found that an unmanned bulk cargo carrier may be able to reduce the cost of carrying freight by only around 3.4%.

But for any of the world’s massive global freight or logistics companies (such as UPS, DHL, or Amazon) a 3.4% reduction in costs represents millions in recouped revenue, which may be incentive enough to embrace the technology.

And even though there are over 1 million ship-bound jobs at stake, at least a portion of the job losses will be offset by job growth in new areas.

And the tech may create jobs in other areas, too, thanks to data. With Rolls-Royce and Google, for example, already collaborating to use marine data sets in various AI and machine learning models, there’s no limit to how marine intelligence could reshape the transportation sector at large.

“Autonomous shipping is the future of the maritime industry,” says Mikael Makinen, President of Rolls-Royce Marine. “As disruptive as the smartphone, the smart ship will revolutionize the landscape of ship design and operations.”