Research Brief
2026
A look at the financing activity, top cities, top investors, and most well-funded companies in Germany.

Germany has long been touted as the next big European tech hub. But after a blowout Q1’15, which saw over $1.2B raised across 70 deals (both multi-year highs), overall activity fell back down to earth in Q2’15. The absence of multiple mega-rounds and the second-lowest quarterly deal number since Q4’12 combined for a major pullback quarter where just $401M was raised across 45 deals. Q2’15’s largest deal was to Delivery Hero in the form of a $110M Series H, the only $100M+ round to a VC-backed German company in the quarter.

Q1’15, in contrast, was buoyed by mega-rounds to HelloFresh ($126M Series E) and to Delivery Hero (a $563M corporate minority investment). 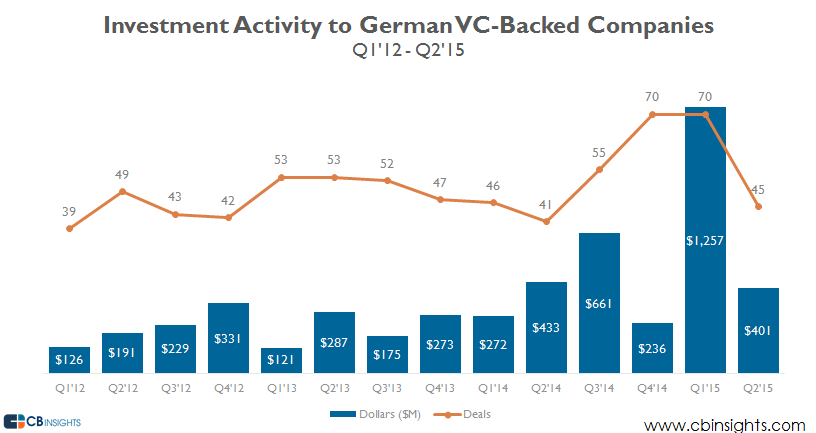 Berlin continues to dominate the German VC scene, accounting for over 40% of all investments to German VC-backed companies since 2012 and over 55% of all funding. Berlin hosts multiple high-flying German startups including Delivery Hero, Foodpanda, Soundcloud, and HelloFresh, among others. Rocket Internet — known for producing startups that clone successful American tech companies — is based in Berlin.

Munich is second for deal activity in Germany, with 87 deals sine 2012 raising nearly $527M. Munich is home to Westwing Home & Living as well as JenaValve Technology, which each have raised over $100M in cumulative funding.

Hamburg rounds out the top 3 with 44 investments into VC-backed companies since 2012, the bulk of which have gone to early-stage companies. 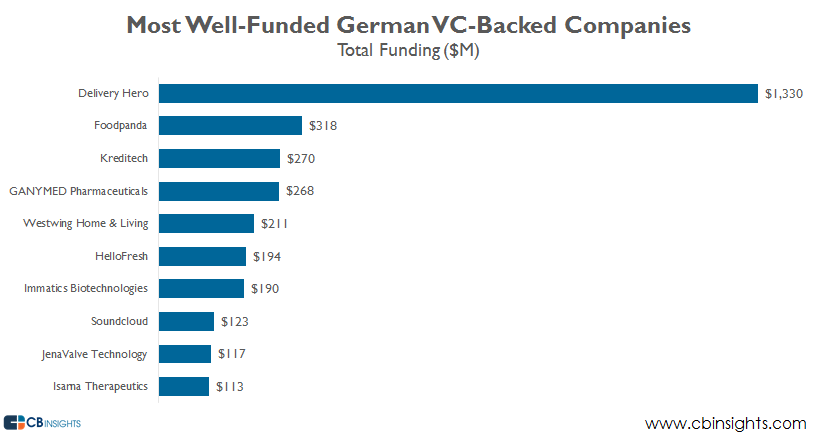 Another VC, Bonn-based High-Tech Gruenderfonds, is by far the most active in Germany, investing in over 100 companies since 2012, including Windel.ne which recently went public at a ~$533M valuation as well as 6wunderkinder which was acquired by Microsoft for ~$200M in June.

German Startups Group and IBB Beteiligungsgesellschaft rounded out the top 3.

Want more data on Germany’s VC activity? Download the Q2 2015 Global Venture Report, login to CB Insights, or sign up for free below.