High-Tech Gruenderfonds leads the list of most active VCs in Europe's next tech hotbed, Germany.

Berlin-based Rocket Internet is headed for an IPO and Silicon Allee Tech companies raised more funding in Q1’14 than any previous quarter. In short, things are heating up in Germany’s tech scene. We decided to look at the most active tech VCs within Germany and found a select group of investors appears to be doing the bulk of the deals across both the early and mid-stages. The data below.

High-Tech Gruenderfonds was the most active investor in German Tech companies since 2009 on a unique company basis. The bulk of the fund’s investments have come at the seed stage, and the firm has focused on Internet & Mobile companies heavily this year.


T-Venture and Holtzbrinck Ventures rounded out the top 3 as the most active VCs across all stages. T-Venture largely focused on Series A and B rounds, including investments in MyTaxi, Netbiscuits, and Apprupt. 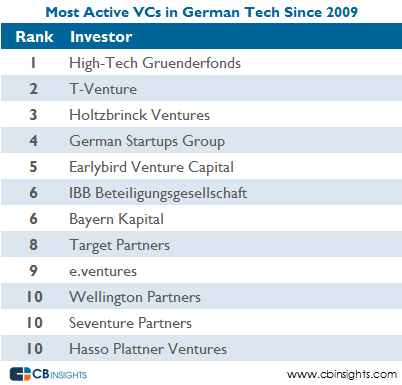 High-Tech Gruenderfonds dominated the early-stage, investing in over twice as many tech companies as Holtzbrink Ventures and German Startups Group.

Holtzbrink Ventures, founded in 2000, has been an investor in the German Tech ecosystem for over a decade and focuses on “very early stage” investments. Some of Holtzbrinck’s notable early-stage investments include a $7.5M Series A in social game developer, Wooga, as well as a $13M Series A investment in Payleven, the Square and Paypal rival out of Rocket Internet.

Conversely, German Startups Group is a relatively new venture group founded in 2012. Since being founded, the company has made a large number of early stage investments. Select early-stage investments in H1 2014 include second-screen TV startup TVSmiles’ Series A as well as art eCommerce site Juniqe’s Seed round. 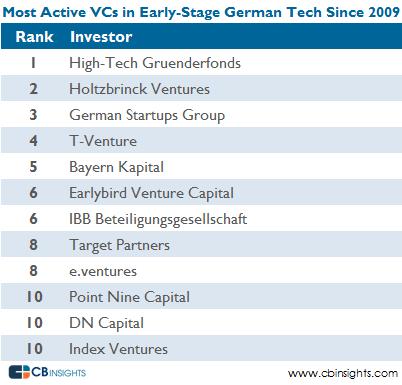 T-Venture and a trio of investors including Target Partners, Holtzbrinck Ventures, and Earlybird Venture Capital followed High-Tech Gruenderfonds as the most active Mid-Stage (Series B & C) tech VCs since 2009. High-Tech Gruenderfond’s mid-stage investments include participation in men’s clothing shopping service Outfittery’s $17.81M Series B, as well as a pair of investments in online glasses shopping site Mister Spex, a European competitor to Warby Parker.

Target Partners invests actively in Germany, Switzerland, and Austria. Their recent mid-stage investments in Germany include participation in small-business insurance portal Finanzchef24’s $5.45M Series B, as well as Treasury Intelligence Solutions’ May 2014 Series B. 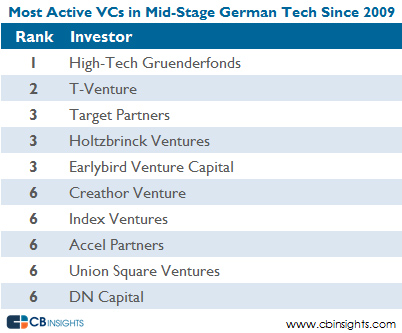 Want to track these investors and investment into the German tech landscape, login to the CB Insights venture capital database or create a free account below.