Several important recent developments in the world of genetics—such as the release of cheap sequencing technologies and gene-editing tools—have boosted interest in the genomics space. 2017 is on track to see almost double the funding levels of 2016 and a slight increase in deal totals.

We used CB Insights data to analyze the genomics landscape. These are companies involved in the sequencing and/or analysis of genetic data. Examples include sequencing hardware, cancer biopsies using circulating DNA, direct-to-consumer testing kits, and more. Not included is the application layer, such as CRISPR, gene therapies, etc.

2017 has been a banner year for genomics startup funding activity, and to date 2017 funding has already surpassed the 2016 total, with $1.9B invested across 65 deals. In general, funding has been concentrated around the blood-based cancer diagnostics area, with companies focused on cancer detection and disease screening raising large rounds: GRAIL has raised nearly $1B this year in total, Guardant Health raised a $360M Series E in Q2’17, and Freenome raised a $65M Series A in Q1’17.

At the current run rate, full-year funding could increase by 98% from 2016’s total of $1.7B, while deal activity is poised to be on par with the previous two years. 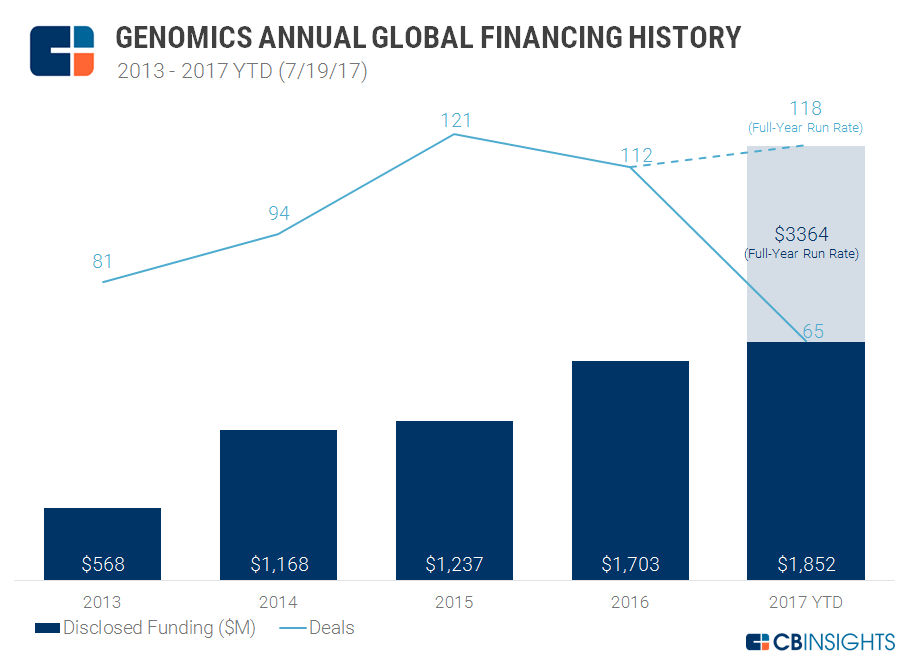 At the quarterly level, the last few quarters have sustained strong funding numbers: since Q4’16, genomics companies have raised more than $500M each quarter. Q4’16 also saw a peak in deal activity, with a record of 37 deals that quarter. Q2’17 tied with Q3’15 as the second-highest quarter for deals to date. 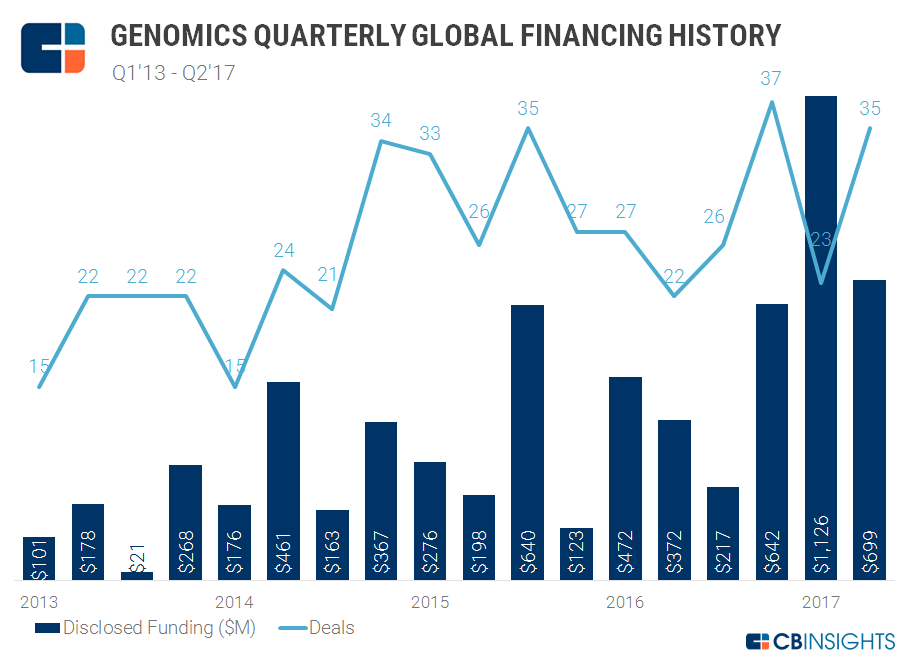 Looking at genomics deals by stage, there is a clear increase in early-stage (seed/angel and Series A) deals from 2013 – 2015. However, at only 25 so far this year, 2017 has seen a slow start for early-stage deals in the space, putting them on track to drop below 2014 levels.

Compared to the lag in early-stage deals, late-stage deals (Series D, Series E+, Growth Equity, and Private Equity) seem to be gathering steam: there have already been 6 late-stage deals in 2017 (compared to 8 total in 2015 and 2016), as corporates such as Novartis Venture Fund and Johnson & Johnson, as well as deeper-pocketed investors like OrbiMed and Temasek, make plays in the later-stage genomics space. 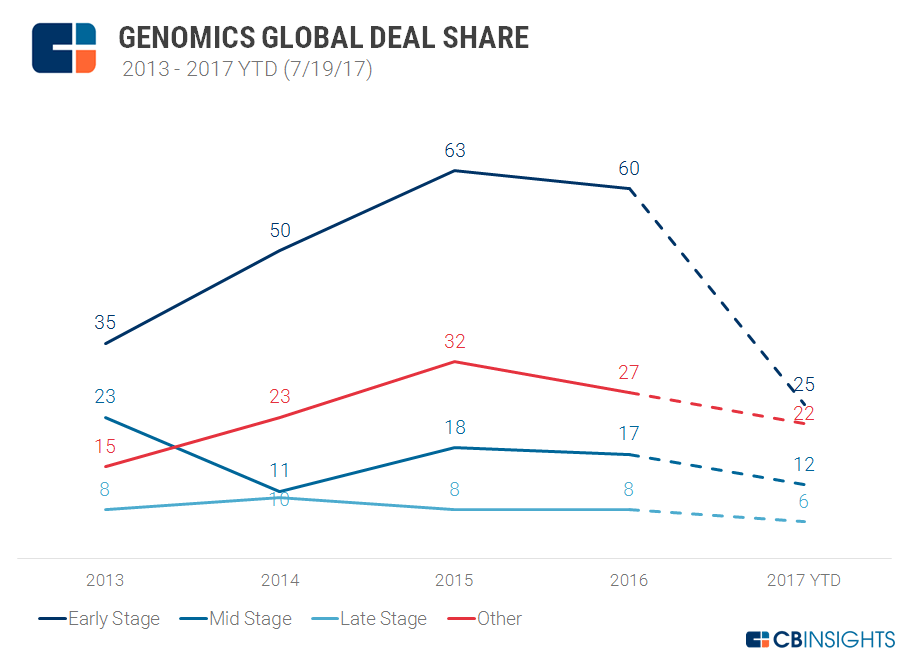 The US commands the majority of deal share in genomics companies globally, with American companies accounting for more than two-thirds of all deals since 2013. The UK follows at just under 10% of deals. While China claims only 3% of deal activity, China-based genomics companies have raised substantial funding: genomics research nonprofit BGI-Shenzhen raised a $320M round in 2014, and more recently, Beijing-based Novogene raised a $75M Series B in Q3’16. 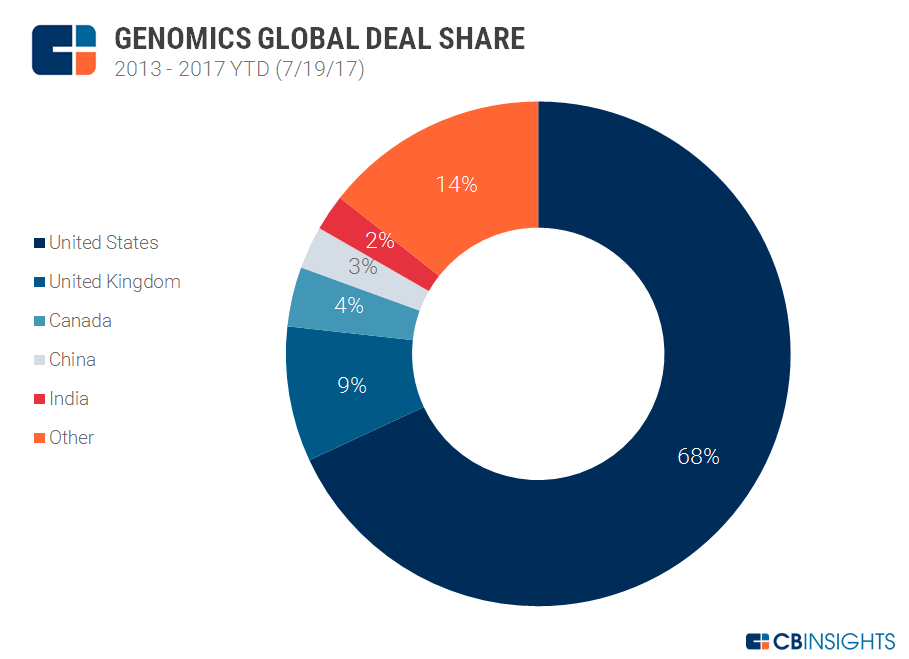 Within the US, California leads, accounting for 43% of genomics deals since 2013. Massachusetts, a hub for biotech activity, makes a stronger showing than usual at 12%. More than a third of all deals happened outside of the three major markets (California, Massachusetts, New York), including recent deals into Navican Genomics (Utah), Benson Hill Biosystems (Missouri), and Metabolon (North Carolina). 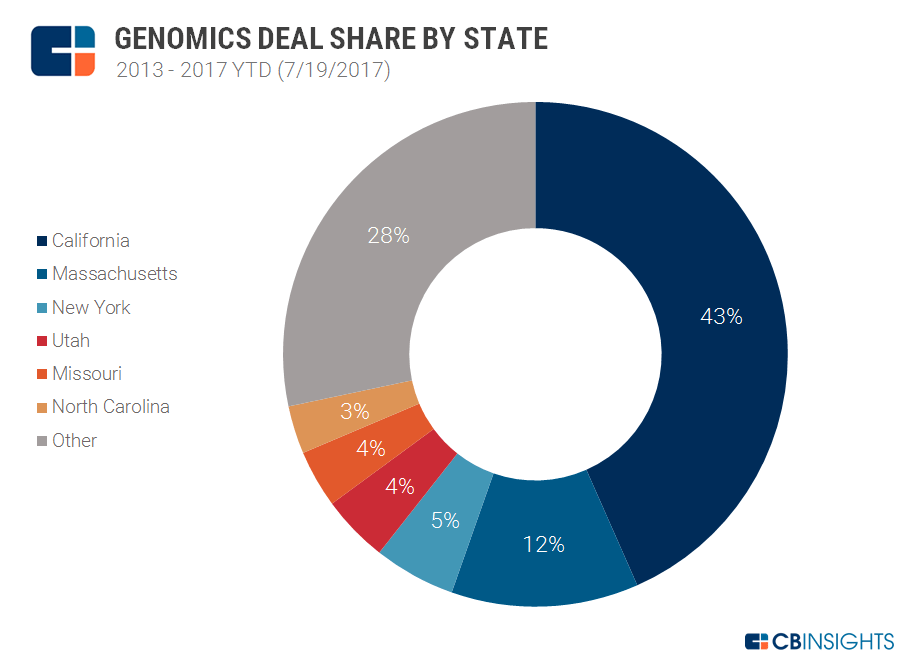