The number of corporates — like Illumina and Roche — investing in genomics startups has increased more than 2X between 2013 and last year.

As evidenced by the increased amounts of funding and deal activity in the last few years, investors are seeing more opportunities in the genomic space. We used CB Insights data to analyze who those investors are and where they’re placing their bets.

The number of unique investors funding genomics startups has increased steadily since 2012. 2015 saw 187 investors that were a part of at least one financing into a genomics company, growth of 82% from 2012. 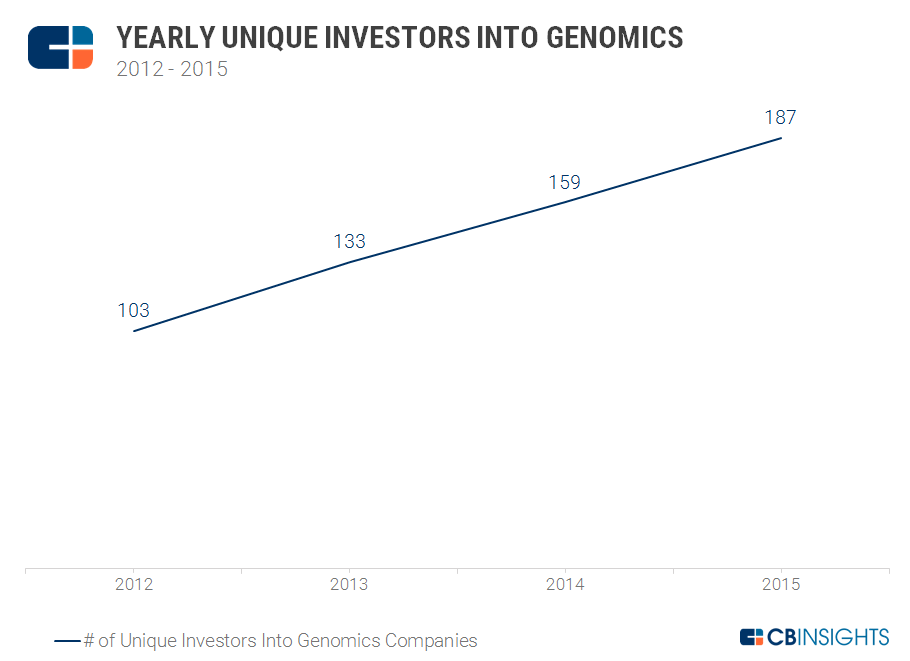 When we break down the composition of genomics investors, VCs are at the top but growth in the number of these has been slowing down. On the other hand, the number of corporates investing in genomics increased 2X between 2013 and 2014, while the group of “other” investors has actually been increasing significantly as well. 2016 has seen the number of these other investor types surpass VCs in terms of participation in genomics. These investors include family offices, asset managers, and private equity among others. 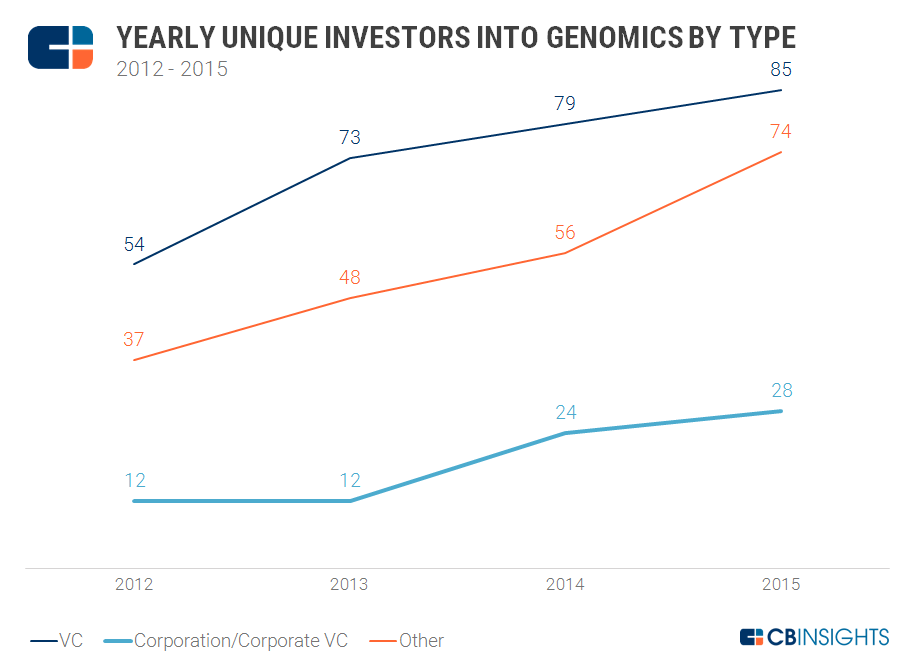 The most active investors in the genomic space are a fairly diverse group and come from both the tech and biotech sides. Among the top investors, there are both biotech and tech accelerators (IndieBio and Y Combinator), health and tech corporates (Roche and Google Ventures), and traditional venture firms. 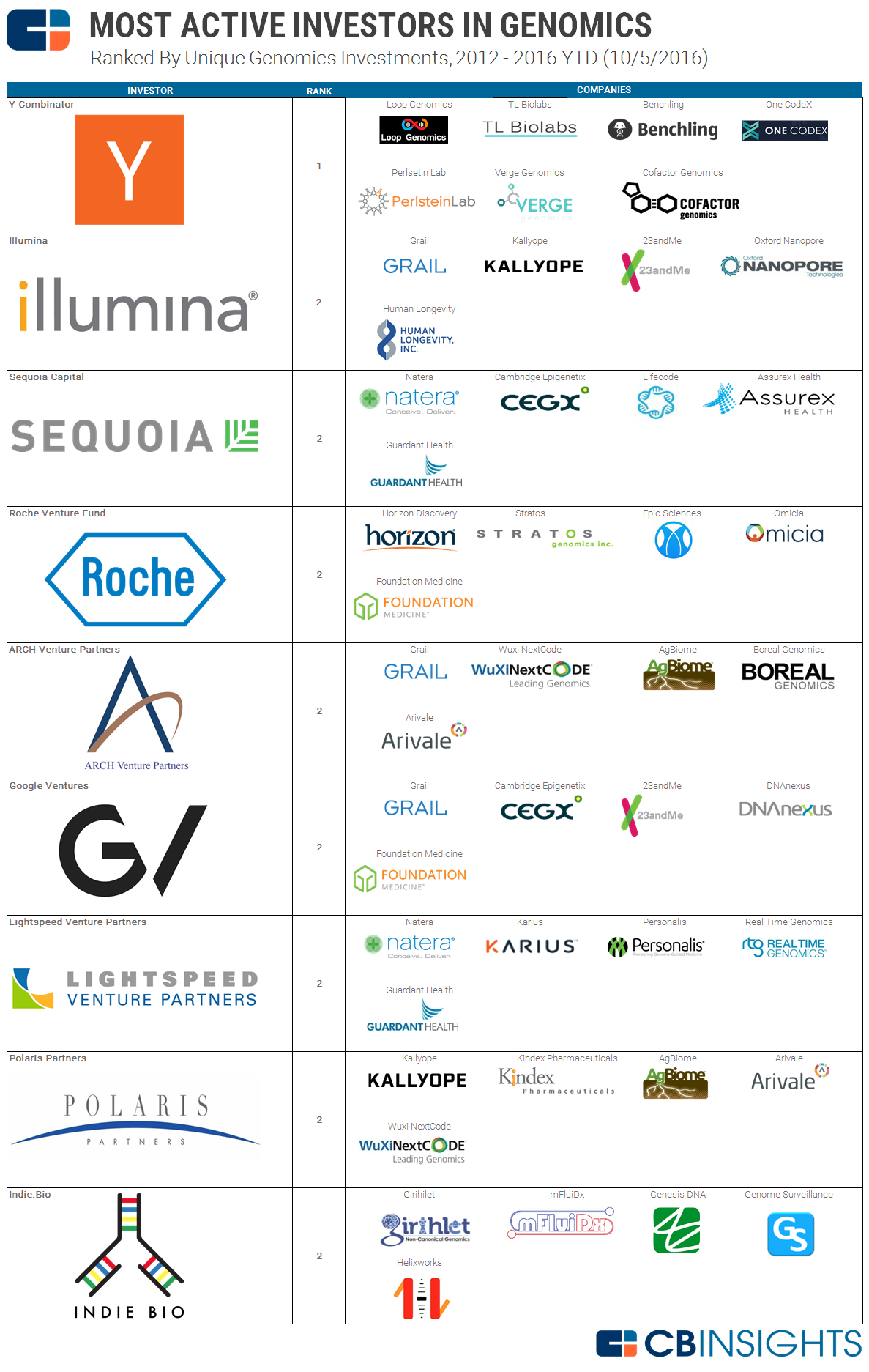 Illumina, the leading provider of gene sequencing machines and the most well-known corporate in the genomics space, is one of the most active corporates in genomics funding. Illumina has significantly ramped up its private market activity, especially with its recently announced venture fund and accelerator. Using our business social graph to look at the company’s activity between 2010 and 2012 compared to 2014 to 2016, we see a clear jump. The company has been involved in some of the most well-funded companies in the space and has made more than 40 private market transactions.

The company has invested in nearly all of the most well-funded genomics startups (23andMe, Oxford Nanopore, Human Longevity). It has also invested throughout the full “stack” of genomics company types, with funding to companies like Grail, which focuses on sample collection and diagnostics, as well as Helix, which offers direct-to-consumer sequencing. 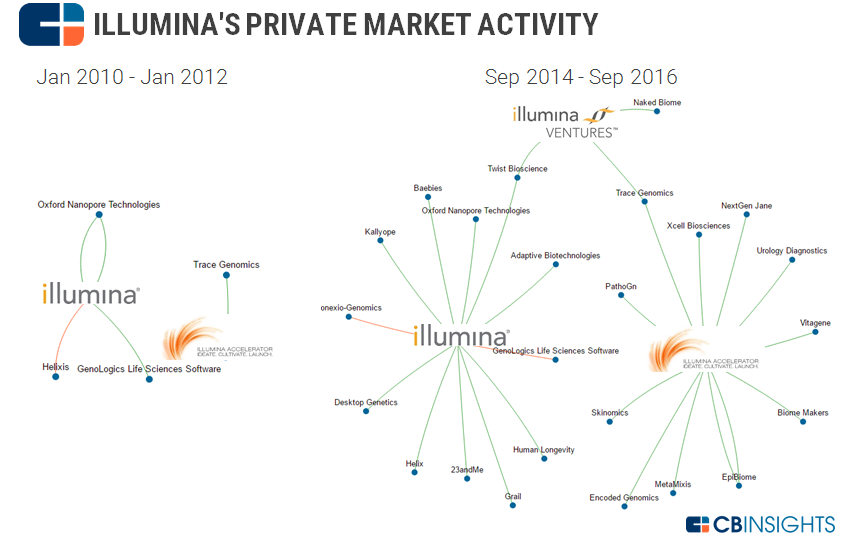 Want more data on genomics companies. Check out our venture capital database or sign up below.