Almost all of the largest deals in the space have included participation by at least one corporation, including Celgene, Illumina, and GE.

Genomics has become a hot area thanks to the fast-growing amount of genetic data available and new techniques to analyze large datasets. As excitement in the space increases, we used CB Insights data to map out the investing trends.

On a yearly basis, deal activity into the space has increased steadily between 2012 and 2015, breaking 100 deals in 2015. However, 2016 has so far seen a slowdown with the year on pace for just over 90 deals. Funding on the other hand has already seen its third straight year with more than $1B in investment, with 2016 on pace to hit $1.3B+ by the end of the year. 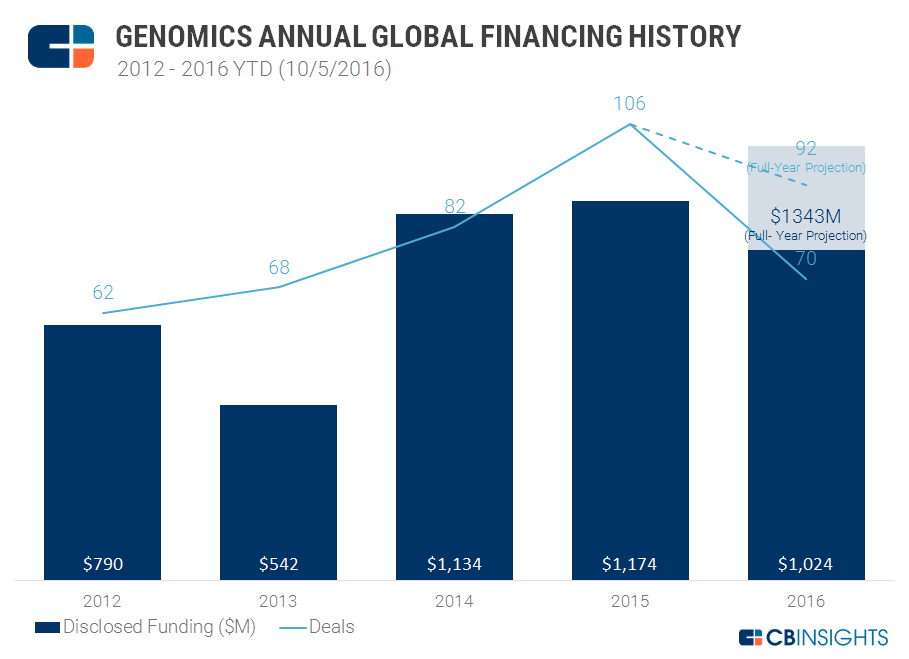 On a quarterly basis, there has been a slow decline in deal activity since a peak in Q4’14, which saw 31 deals (a jump of 82% from the quarter before). Funding saw its largest quarter in Q3’15 with more than $600M invested and several rounds above $100M each including 23andMe and Oxford Nanopore. 2016 saw a strong start in terms of funding, but has since slowed down. Some companies that received investment this past quarter include Phosphorous, Color Genomics, and Singlera Genomics. 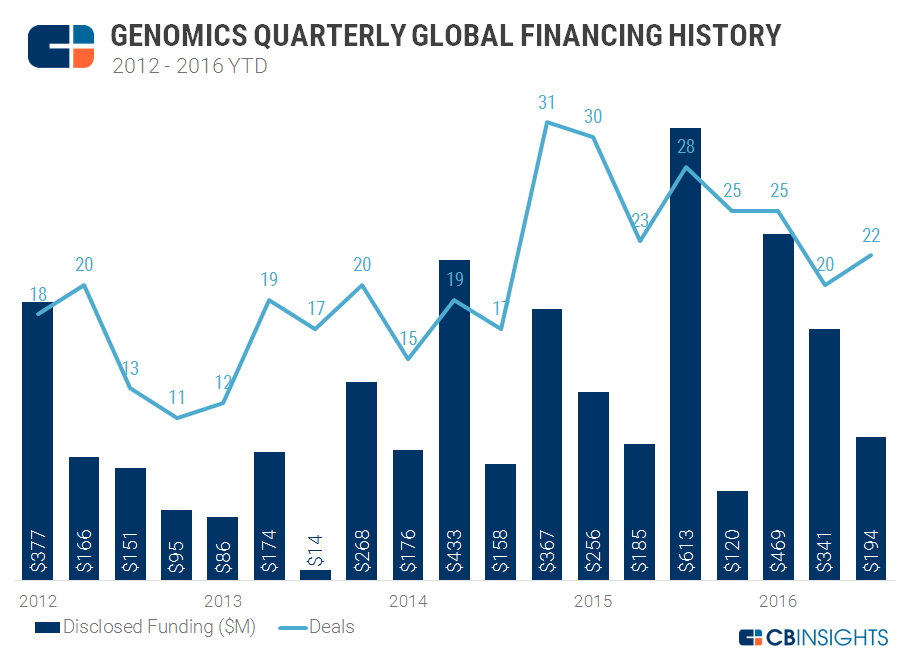 The genomics space is still nascent. Since 2014, there’s been a marked increase in deals in the earlier stage, with more than half the deals happening in the seed/angel or Series A stages in the first three quarters of 2016. This is more than double the share of those same stages in 2012. Companies like Trace Genomics, CellMax Life, and Sequence Bio saw early-stage investment in 2016. 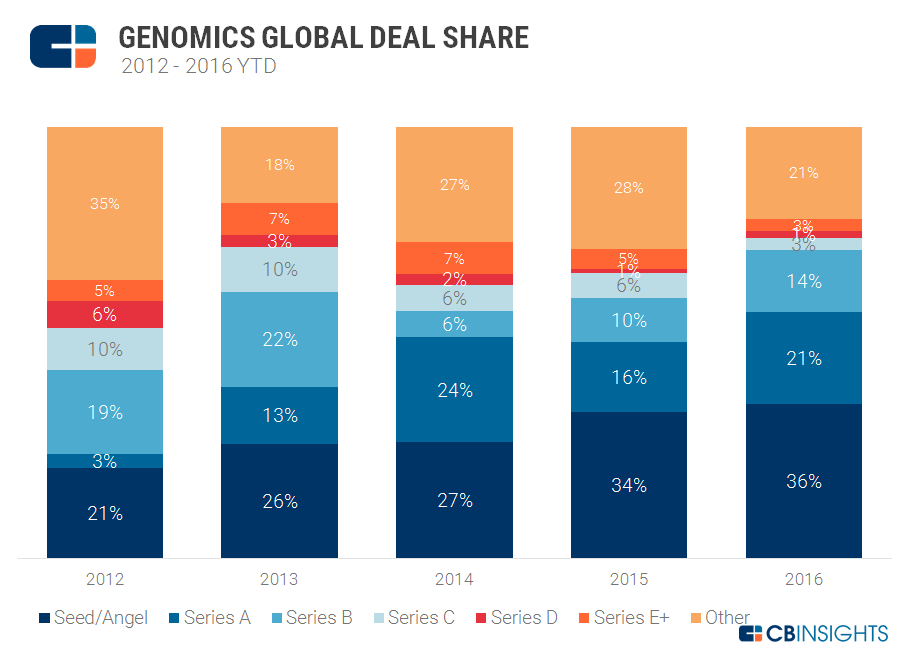 Corporate participation in genomics has increased substantially in the last few years. Since 2014 about a quarter of all deals saw participation by at least one corporate. Almost all of the largest deals in the space have included at least one corporation, including Human Longevity’s $220M Series B (Celgene, Illumina, GE Ventures), 23andMe’s $115M Series E (Google Ventures, Illumina, WuXi Venture Fund), and Grail’s $100M Series A (Google Ventures, Illumina). 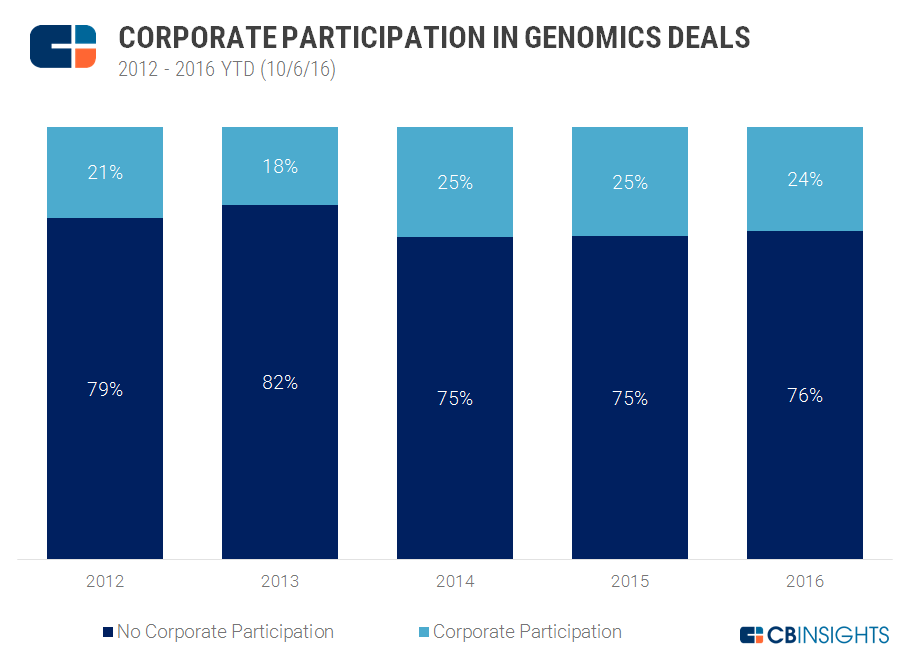 While still in early days, genomics has seen a growing number of exits through the years, on pace to break 30 for the first time in 2016. This includes 10 IPOs since 2012, with the most recent being Fulgent Genetics. Roche has been the most active acquirer in the space, picking up several companies doing DNA-based diagnostics, including Ariosa Diagnostics and CAPP Medical. 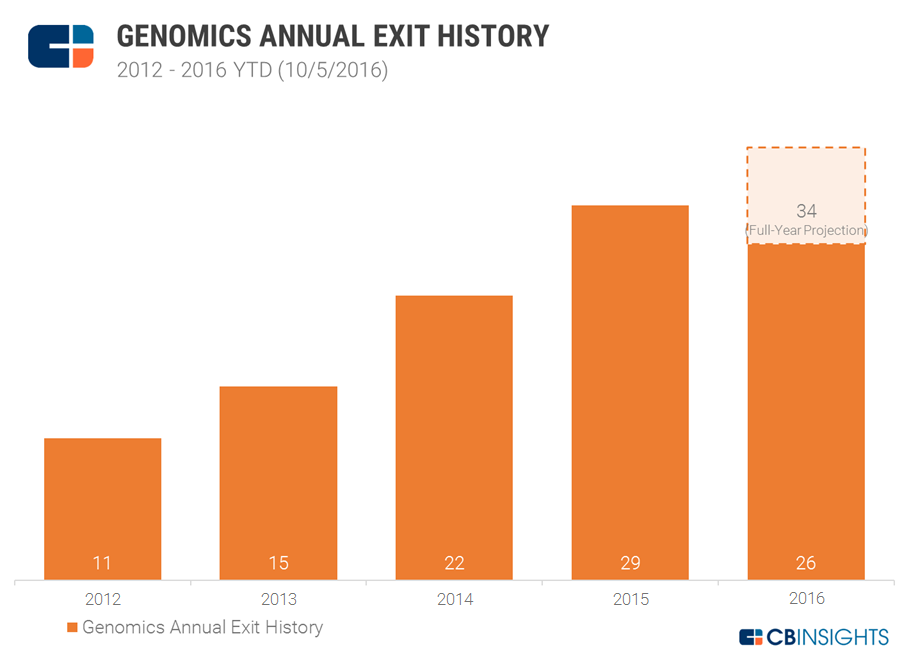 Want more information on genomics companies? Check out our private market database or sign up below.