Research Brief
2556
With Hulk Hogan winning his suit against Gawker, we look at where Gawker stands among competitors that have recently enjoyed a spike in valuations.

This week’s big news in media was a Florida jury awarding Hulk Hogan $115M and an additional $25M in punitive damages due to the 2012 publication of his private video on Gawker.com. CB Insights’ tracking also picked up some new financials on the blog network from court filings. Gawker is now valued at $276M on gross revenues of nearly $50M in 2015.

So using CB Insights valuation data, we took a new look at the recent M&A valuations of old-guard news and media companies (the FT, The Economist, Boston Globe, South China Morning Post, Forbes, and The Washington Post) alongside the valuations of digital news and media upstarts, according to recent transactions. Where does Gawker stand in the mix?

As the chart below highlights, Gawker’s valuation stands above those of old media involved in recent M&A transactions, including The Washington Post and South China Morning Post as well as those of new media upstarts including Business Insider, which was acquired by Axel Springer for $442M. 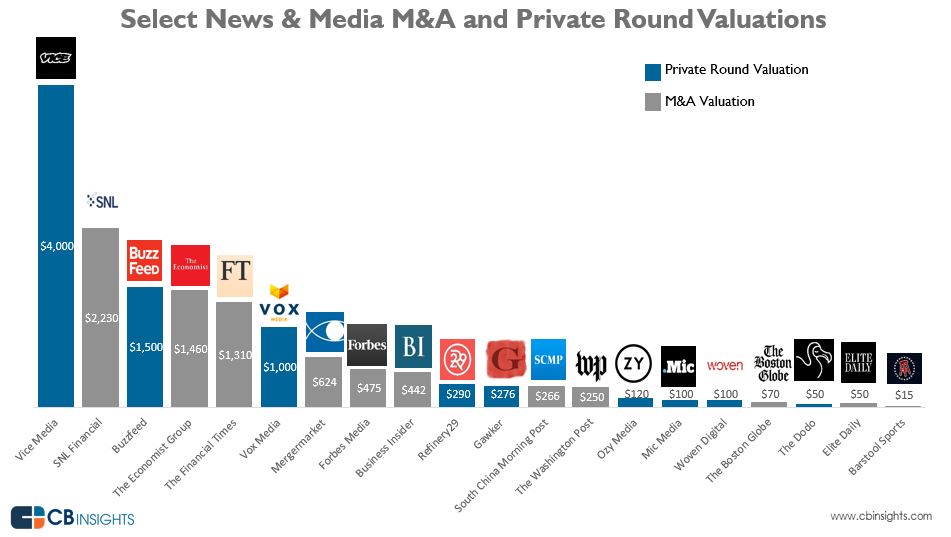 Among a cohort of the group above, Gawker’s price-to-revenue multiple also stands near the middle of the pack, which ranges from 16x to below 1x. While sales figures are often hard to track, our machine learning technology is increasingly picking up on real or rumored revenue figures, which we highlight below.

Looking for more media data and analytics? Sign up for the CB Insights Venture Capital Database below.