Research Brief
2405
Funding to gaming startups pulled back in 2014 but is still way up from 2013 crash, and broke the $1B mark for the second year in a row.

Venture funding into the gaming ecosystem has been volatile as the gaming industry traverses various phases. In 2008-2010, the rise of casual and social gaming spurred by Zynga and its brethren pushed a lot of investors into the market. Missteps with that model saw interest wane, but now interest is resuming with a focus on eSports and virtual reality-enabled gaming and infrastructure.

When we look at the financing trends, there’s a buildup of deal activity and investment through 2011. This was shaped by the hype around Zynga, which went public that year. VCs also poured money into casual internet and mobile gaming companies like Spil Games, Rovio Entertainment, and Kabam Games. As Zynga subsequently collapsed in the public markets, deals into the gaming ecosystem dropped, falling to just $533M in 2013 funding.

But 2014 saw a revival in the space spurred by Magic Leap’s gargantuan $542M financing*. Putting aside Magic Leap’s round and another $500M round to Korean gaming company CJ Games, the year still saw $1.4B in financing. 2015 saw deal activity hold steady — which we view as the best indicator of interest in a space — and funding dip to just over $1B. This dip was not as dramatic as the graph might suggest given the aforementioned mega-rounds to CJ Games and Magic Leap. 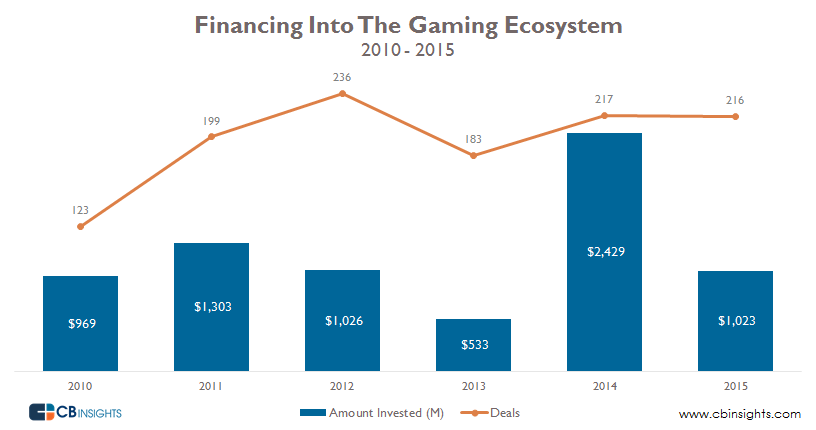 Of late, it has been the eSports and Virtual reality areas where there’s been a significant amount of new activity:

North America remains dominant in private market activity into the gaming ecosystem, with more than 100 deals each year since 2011.

Asia saw growth through 2014 but has seen a dip this past year, while other regions also saw growth in 2015 at 60 deals which marked a 5-year high.

Some examples of funded gaming companies outside of Asia and North America include Space Ape Games (UK), Thotwise (Argentina), and Kiro’o Games (Cameroon). 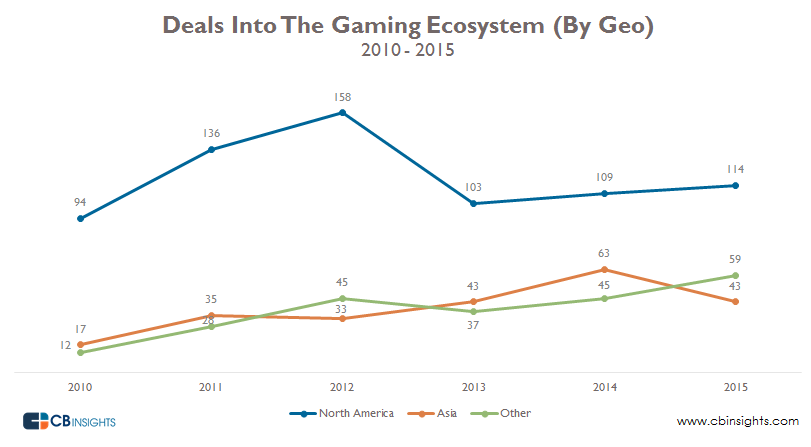 Despite Asia having significantly fewer deals than North America, Asia actually surpassed the US in funding in 2014 (largely due to a $500M investment into Korean online gaming company CJ Games). Both continents saw a major funding drop in 2015 with fewer $100M+ mega-deals. Funding outside of Asia and North America did break $200M for the first time. 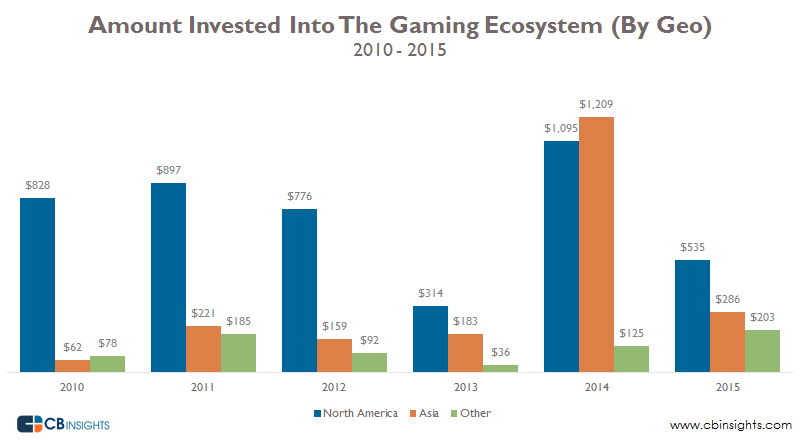 Most of the deal share in gaming has gone to the seed stage. However we’ve seen 3 consecutive years of declining deal share at the seed level, while other stages remained relatively range bound. There was an increase in deals classified as “Other” in 2015, which includes convertible note funding and minority investments by corporations who are increasingly active investors in the startup scene generally. 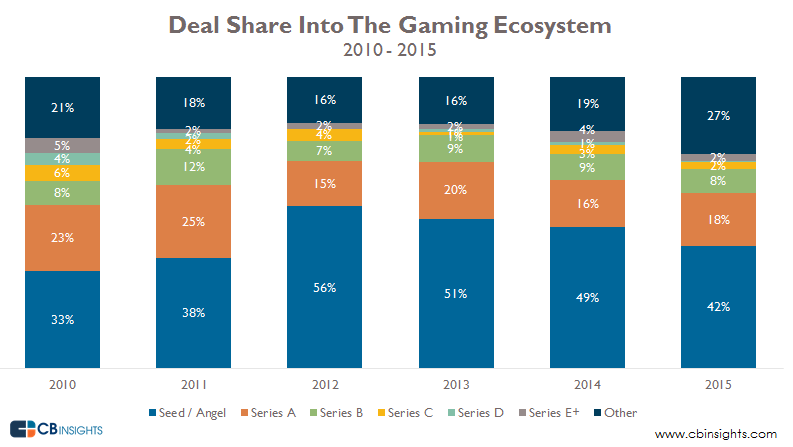 In 2015, the most active investor in gaming has been the River Accelerator from Rothenberg Ventures, which has invested solely in VR companies (including several specialized in gaming). London Venture Partners was a close second, investing mostly in pure gaming companies. Seven investors had 5 or more investments into gaming-related startups in 2015.