Research Brief
1473
Zynga's demise has spurred the decline of the gaming industry. Funding and exits in the sector have decreased by 70+% since 2012.

With the massive acquisitions of Mojang and Twitch.tv, has interest in the hit-driven gaming space grown? We analyzed CB Insights data on financing and exits into the gaming sector and the clear answer is nope.

Specifically, we analyzed gaming industry data since 2009 and dive into:

Deals and dollars – the rise and fall of Zynga

When we look at the deals and dollars trends in the gaming industry, financing seems to largely follow Zynga‘s fortunes. 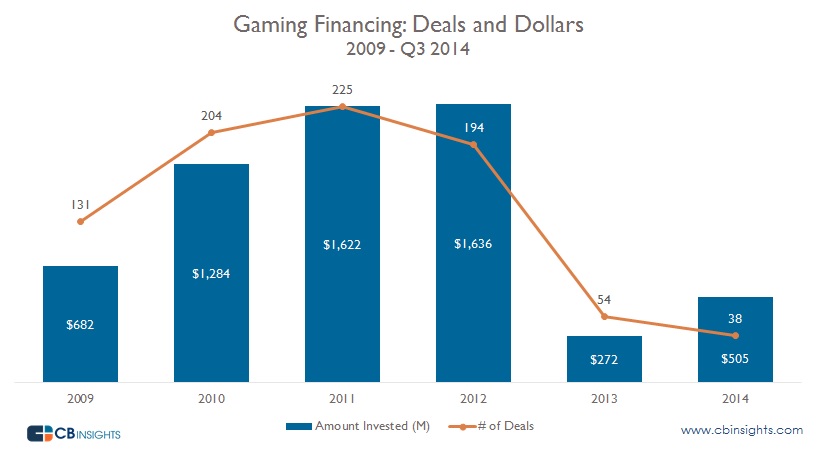 In 2012, Zynga’s stock price crashed and it spooked investors who fled the industry. In 2013, only $272M was invested across 54 deals, representing an 83% decrease in funding from 2012. Even 2012 was buoyed largely by a $688M corporate minority in NCSoft by Nexon, and a $330M corporate minority in Epic Games by Tencent.  Without those two mega-deals, 2012 was also a down year. 2014 has seen a recent uptick in funding, though deals have continued to stay at depressed levels. Large funding deals this year include Kabam, Linekong Entertainment, and gumi.

Financing by series – the shift from Seed/Angel

Until 2013, most deals were occurring at the early stage (in Seed/Angel rounds) as the space was hot.  2012 saw more than 50% deal share was going to Seed/Angel. With the crash, early stage activity has quickly dried up. With the downturn, seed/angel activity it the space declined to 22% in 2013 and only 11% through Q3 2014. Deals in Series B have grown since 2012, and have taken nearly a third of deal share in 2014 which includes deals in Red 5 Studios and Flaregames. Series E+ financing also reached a 5 year high of 15% deal share, which included deals in Kabam and RockYou.  Investors are supporting their existing portfolio companies but minimal early stage activity. 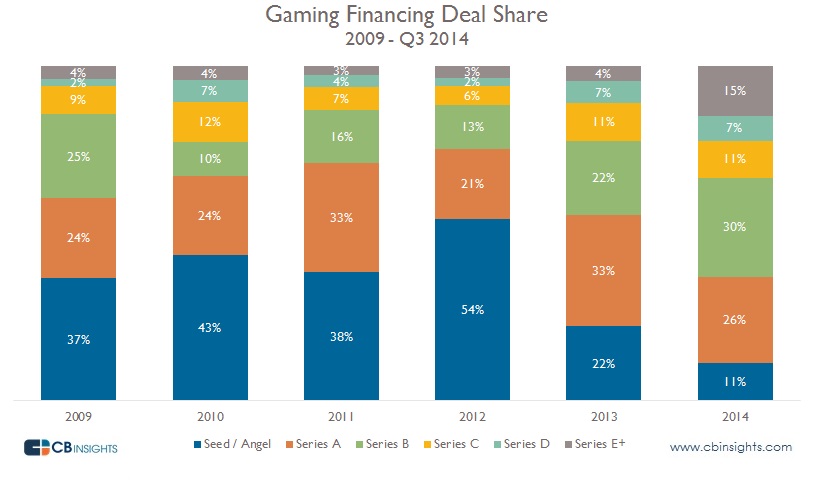 When we look at the funding share by series, we see less funding going to the early stage (seed/angel + Series A). 2014 has seen a boost in Series E+ funding thanks to Alibaba‘s investment in Kabam. Seed financing dollars have been virtually non-existent this year, amounting to less than 0.5% so far. 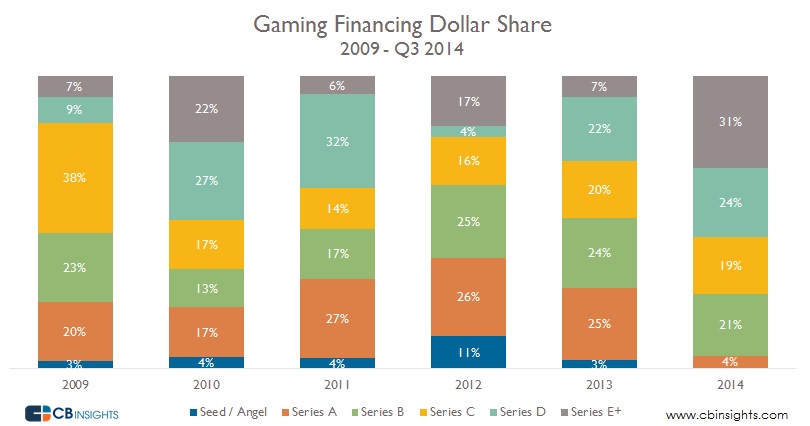 Kabam is the most well funded company, followed by Trion Worlds which recently raised an $85M growth equity round which included Bertelsmann Digital Media Investments. In total, the top funded companies have raised more than $1B.

Most active gaming geographies – California is the place to be

California dominates the list of gaming companies with nearly $3B deployed across 330+ deals. New York came in second place, with $280M+ invested in 64 deals including Major League Gaming and Oberon Media. While the US has been dominant in funding in the gaming industry, both the UK and China have seen more than 30 gaming deals and $400M of funding.

Intel Capital has been the most active investor since 2009, with the majority of investments concentrated in 2011. They have invested in companies such as Kabam, Digital Chocolate, and CrowdStar. SV Angel, Y Combinator, and Accel Partners followed closely, with more than 10 investments in the space.

At it’s peak, the gaming industry saw 87 exits in 2011. Zynga alone picked up more than 20 companies between 2010 and 2011. The funding crash in 2013 also saw a 72% decrease in exits – another reason investors have shied away from the industry. Some of the notable exits in the space recently include the multi-billion dollar acquisition by Microsoft of Mojang and the IPOs of Nexon Holdings and Shanda Games. 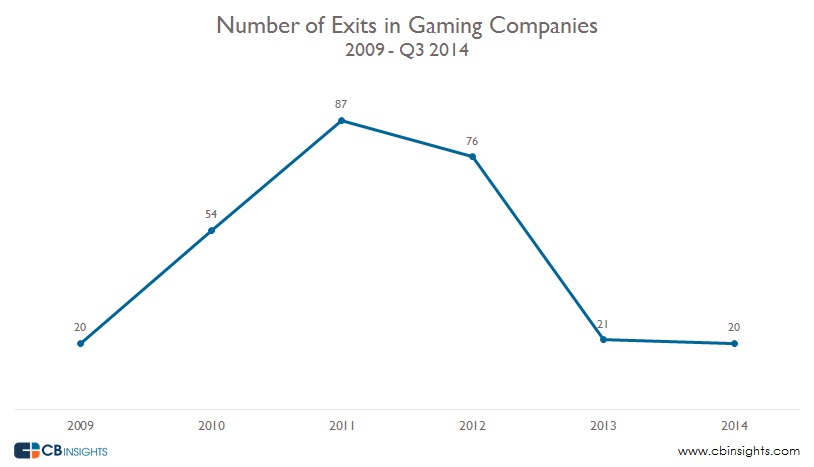 Want to track financing and exit activity to the gaming sector? Create a free account for the CB Insights private company financing database below.