Software is beginning to make inroads into the construction industry, where funding has more than quintupled from $51M in 2010 to $254M in 2015. This positive trend runs parallel to a buoyant funding climate for real estate tech, which we’ve also detailed.

Construction tech is still an emerging field, but activity is heating up as software startups leverage mobile and the cloud to facilitate construction design, team collaboration, and project site management. Other startups are using drones and big data analytics to revolutionize the traditional mapping and surveying of construction sites.

Aside from a hiccup in 2014, construction tech deal activity has risen in every year since 2010.

In terms of dollar trends, outsized funding rounds can skew annual and quarterly deal tallies in this young field. For example, 2012’s numbers were largely driven by a $76M private equity round to Viewpoint Construction Software. Bain Capital Ventures took a majority stake in Viewpoint a couple of years later.

Nevertheless, 2015 was easily a record high for construction tech in terms of both deals and dollars. 2015’s largest deal was a December 2015 $50M Series F round to Bessemer Venture Partners-backed Procore Technologies, which offers cloud-based construction management software. A month earlier, Tenaya Capital led a $40M Series B round to PlanGrid, a construction document collaboration app.

By definition, construction tech encompasses startups providing on-site and offsite software and hardware as well as online rental and buying sites for the construction industry. 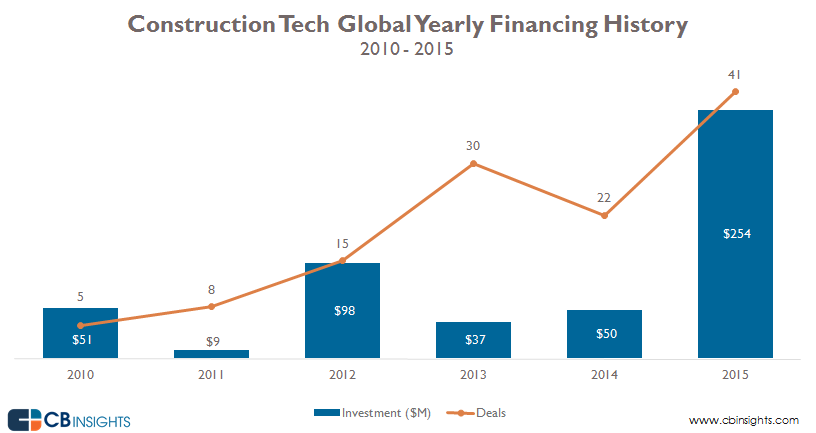 Scant deal activity also skews deal share in 2010 and 2011. However, later years show a emphasis on early-stage (Seed and Angel) deals, unsurprising giving the still-nascent nature of construction tech. A fair number of deals are also at the Incubator/Accelerator stage or undisclosed altogether (classified as “Other”). 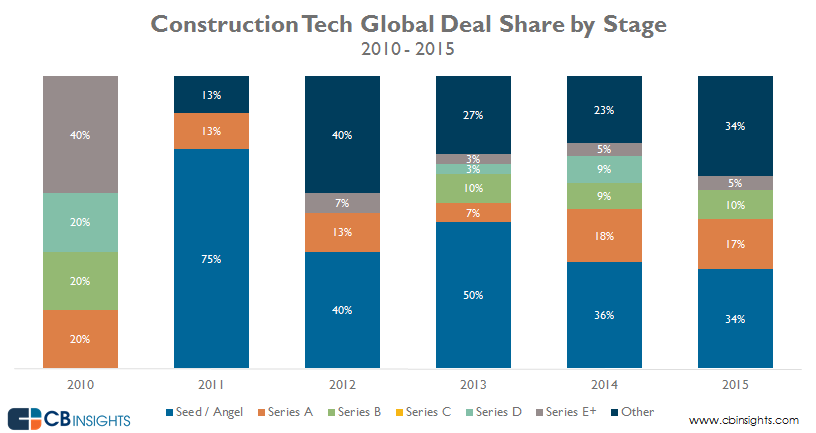 Want more data about construction tech startups? Login to CB Insights or sign up for free below.