Deals and funding plunge amid a scarcity of mega-rounds, with only two $100M+ deals to food tech in the quarter.

Food tech startups were hit hard by the global pullback in funding to VC-backed companies in Q1’16. Global food tech deals dropped to 27 in Q1’16 from their record high of 78 in Q4’15. The category has raised just $684M in the quarter, the lowest quarterly funding total in the category since Q4’14.

Our food tech category covers tech-enabled startups specifically involved with the ordering/delivery of food to consumers or the creation of next-generation foods, including:

It does not include restaurant management tech, restaurant reservation services, agriculture tech, or traditional food products.

We used the CB Insights platform to analyze deals and dollars to food startups, and noticed significant trends in funding, deal size, deal stage, and geography from 2012 to today. Amidst the food tech funding pullback, we observe increased innovation in food tech, from products, to partnerships, and business models. For example, 2016 saw early-stage rounds to insect protein companies like Exo, Tiny Farms, and Entomo Farms, and the New York Times recently announced a partnership with meal kit startup Chef’d.

We’ll discuss these trends in detail below. This post includes information on:

Food tech funding and deal count climbed steadily from 2012 to 2014, before skyrocketing in 2015, to 273 deals totaling over $5.6B. However, if this year’s current run-rate continues, the year would see less than half as many deals as 2015 and less than $2.5B in funding.

Funding and deals have dropped off dramatically in the first part of 2016 (through 5/5/16), in part because mega-rounds have faded as a factor.

This year has so far seen no deal larger than $150M. The largest deal to date is a $150M Series D to BigBasket, a Bangalore, India-based grocery delivery service. San Francisco-based grocery delivery service DoorDash ranked second, with a $127M Series C. In third San Francisco-based Juicero, which produces high-end electric juicers and juice cartridges, raised a $70M Series B.

Just one company, Chinese restaurant delivery site Ele.me, accounted for a significant amount of the 2015 funding. The startup’s multiple rounds ballooned in size over the course of the year, from a $350M Series E in Q1’15, to a $630M Series F in Q3’15, and a $1.2B corporate minority in Q4’15. These rounds represented $2.2B in total, and 39% of funding to food tech in the year.

Only one US company even cracked the top 10 deals in size for 2015: Blue Apron‘s $135M Series D in Q2’15. Other major deals included $126M to German meal-kit delivery service (and Blue Apron competitor) HelloFresh, and $120M to Indian local food deliverer Grofers. 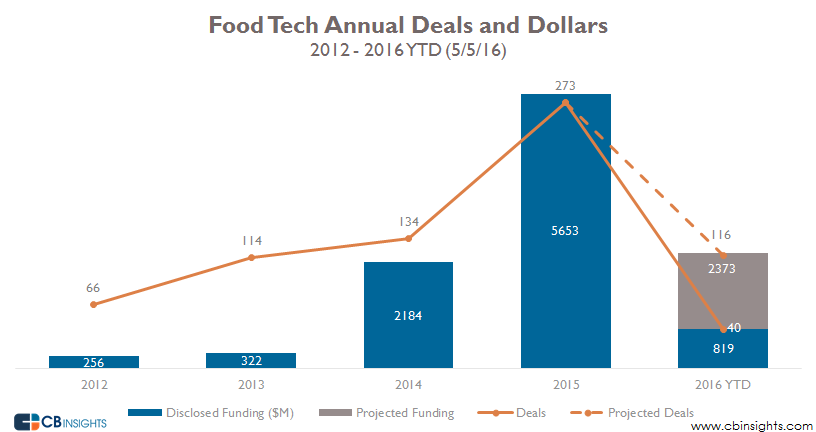 Overall, our data shows food tech attracting larger-size deals over time. Though we’ve tracked deals since 2012, the 50 largest food tech deals have all taken place since 2014. This includes 19 mega-rounds of $100M+.

Q4’15’s peak total of $2.1B in funding to the category was boosted by five mega-rounds: the $1.2B corporate minority to Ele.me by Alibaba and Ant Financial Group, as well as deals to Womai ($220M Series C), Grofers ($120M Series C), Impossible Foods ($108M Series D), and Deliveroo ($100M Series D). Impossible Foods — the only non-delivery company in that list — aims to chemically engineer a plant-based meat substitute, and is funded by investors including Bill Gates, Khosla Ventures, and Google Ventures. 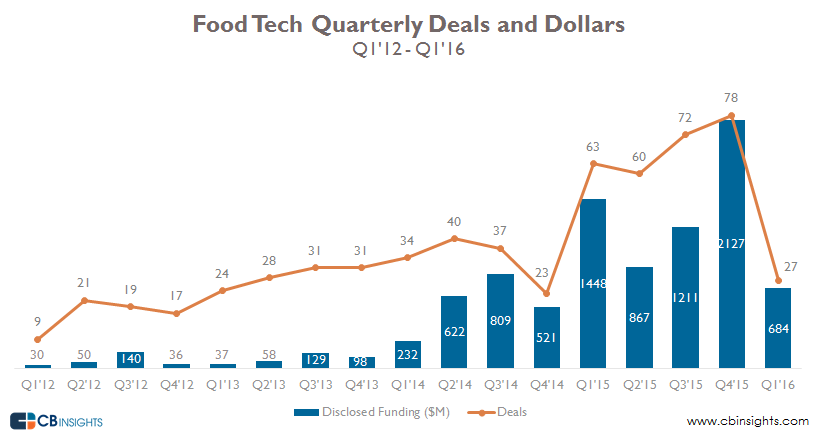 The US market has led global food tech by a wide margin since 2012, even as India, China, Germany and the UK have jostled for ranks two through five. Germany held second place in 2012 with five deals, but ceded it to China in 2013. India showed momentum in 2014, snatching third place from Germany while China stayed in second, but India’s massive leap in 2015 granted it second rank on a deals basis. 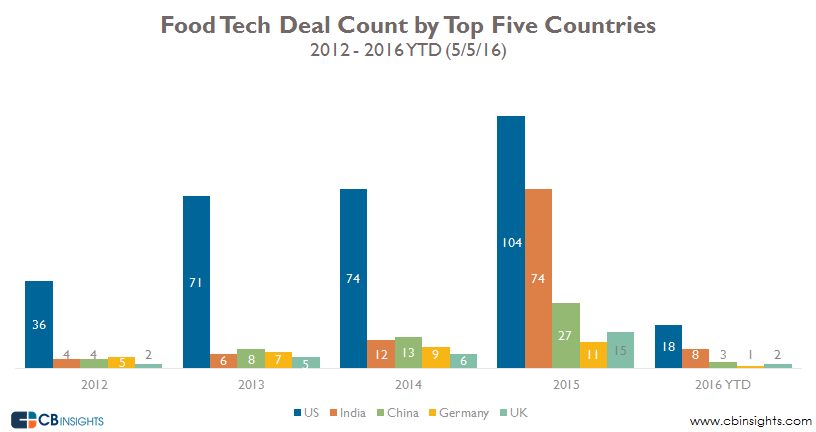 While the US, India and China have led food tech deal counts since 2014, the investor focus in each geography is radically different. 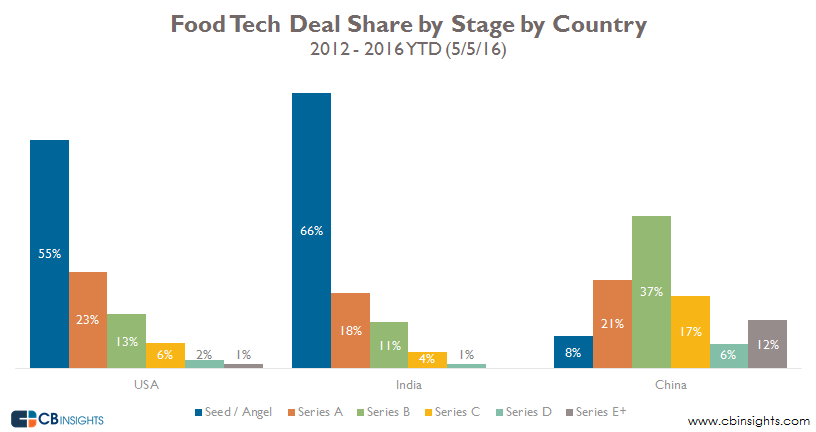 Want more data about food tech and e-commerce startups? Login to CB Insights or sign up for free below.