Research Brief
2002
The US food tech scene shows no sign of slowing down as food startups raise over $750M year-to-date.

VCs have not slowed down their funding to food technology companies, even after more than $1B in investments and 200% year-over-year growth in 2014. 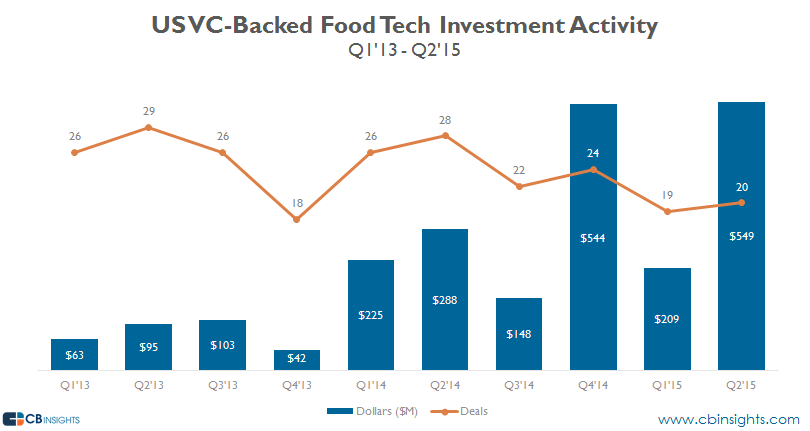 While the bulk of the funding has gone to mid- and late-stage companies, multiple early-stage companies have also been funded in 2014 and 2015 year-to-date.

With this in mind, we used CB Insights Company Mosaic to track the US-based early-stage companies with the most momentum.

CB Insights algorithmically assesses the health of private companies and gives them a Mosaic score, which has several components, including a Momentum score. Momentum measures a company’s traction, based on factors including web traffic, social mentions, and hiring pace.

No food tech company had a higher Momentum score than Favor, at 820. Favor is an Austin-based delivery platform (similar to Postmates) with a sizeable portion of their business focused on food delivery. The company recently raised $13M in Series A financing from S3 Ventures and Silverton Partners, among others. Favor’s overall Mosaic score, 880, also ranks them among the top 5% of all private tech companies.

Drizly, a developer of an alcohol delivery application, ranked second with a 770 momentum score. The company most recently raised $13M in Series A financing from First Beverage Group, Polaris Partners, and Wine & Spirits Wholesalers of America. Drizly has seen growth across news mentions, social media, as well as job listings.

Home Chef — a Blue Apron and Plated competitor — ranked third with a 670 momentum score. The company has seen steady growth in web traffic as well as job listings in recent months.

The most active VC in US-based food tech companies since 2013 on a unique company basis has been Khosla Ventures. Khosla has invested in Instacart, which most recently raised $220M at a $2B valuation, as well as DoorDash, Hampton Creek Foods, and Unreal Brands.

500 Startups and Slow Ventures rounded out the top 3 most active VCs. 500 Startups’ recent bets include Platejoy and Bento, while Slow Ventures most recently participated in Postmates’ $80M Series D, which valued the company at $500M.

Want more data on the food tech space? Login to CB Insights or sign up for free below.