On April 20, Unilever announced it would acquire condiments startup Sir Kensington’s, adding the brand’s vegan mayonnaise and other products to Unilever’s product lineup. The deal highlights a trend toward increased private market activity in food & beverage, as global food leaders aim to tie themselves to the smaller companies that could potentially erode their market share. In fact, $18B of large packaged goods sales in the US shifted from large companies to smaller players between 2011 to 2015, according to the Boston Consulting Group.

To adapt, some of the biggest food companies have launched new funding vehicles since 2015. In October 2015, General Mills launched its VC unit 301 Inc., while Campbell Soup announced Acre Venture Partners, a $125M VC fund, in Feburary 2016. Kellogg’s followed, launching Eighteen94 Capital in June 2016, though it didn’t make its first investment until early 2017; Tyson Foods, one of the world’s leading meat producers, also launched Tyson New Ventures in December 2016, and made its first investment into plant protein startup Beyond Meat. Many of this cohort’s investments so far have focused on plant-based foods.

Other corporates have made notable recent acquisitions, such as Danone’s acquisition of dairy and soy company WhiteWave.

To get a better sense of these food & beverage corporations’ activity, we used our CB Insights Business Social Graph tool to map out their investments and acquisitions since 2013. We found mixed levels of activity among the new accelerators: 301 Inc. has backed seven startups through 04/01/17, while Eighteen94 Capital has only invested in one (Kuli Kuli, which uses the South Asian moringa plant to make snacks and drinks). Interestingly, 301 Inc. invested in plant protein startup Beyond Meat in 2015, while Tyson New Ventures followed with an investment in Beyond Meat in 2016.

We also see differences in strategy emerging. For example, Campbell Soup and Acre Venture Partners seem to target startups focused on direct-to-consumer distribution, such as Habit, which aims to provide personalized meal plans based on users’ blood tests. 301 Inc., on the other hand, has focused on packaged goods startups, generally those offering plant-based foods such as Rhythm Superfoods and Kite Hill.

Scroll down to see the full infographic.

Startups working on new foods and beverages have the potential to change what people eat. Sign up for a free trial and look for Food & Beverage Startups in the Collections tab. 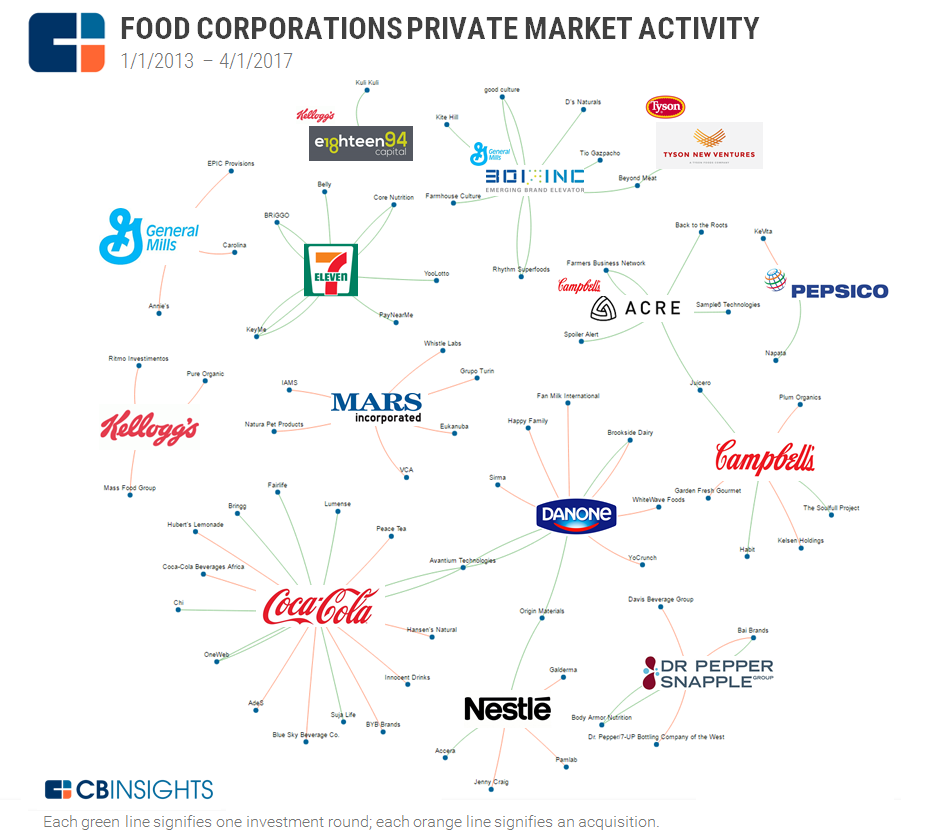 Want more data on food and CPG startups? Login to CB Insights or sign up for free below.