Research Brief
2712
This year's dollars and deals to food delivery startups are on track to hit less than half of 2015 totals. The most well-funded companies are in China and Germany.

Funding to food delivery startups — including grocery and restaurant delivery — ramped up quickly starting in 2012 and reached record highs in 2015 (when $2B flowed into the category in a single quarter). But the pace slowed dramatically in 2016.

Some startups, like San Francisco-based SpoonRocket and India’s PepperTap, have even recently shut down or sold off for their assets. (We’d highlighted SpoonRocket’s troubles last June, based on data from our proprietary Mosaic algorithm.)

Our data shows leaps in food delivery funding in 2014 (+570%year-over-year) and 2015 (+184%) when it hit nearly $5.5 billion across 259 deals. However, food delivery startups have pulled in just over $609M across 23 deals in the first quarter of this year, which puts the category on track for only half the funding it saw last year, and fewer then half as many deals as in 2015.

Annual deals to food delivery startups grew from 58 in 2012 to a record of 259 in 2015. However, 2016 data indicates this year may attract fewer than half the deals of last year.

The average deal size in 2016 year-to-date remains close to the mean size observed in 2015, at $23.5M, despite the drop in overall funding. Indian grocery delivery site BigBasket raised a $150M Series D in the year’s largest deal so far, followed by a $127M Series C to US meal delivery site DoorDash, and a $70M Series C to Chinese produce delivery service Benlai Life. 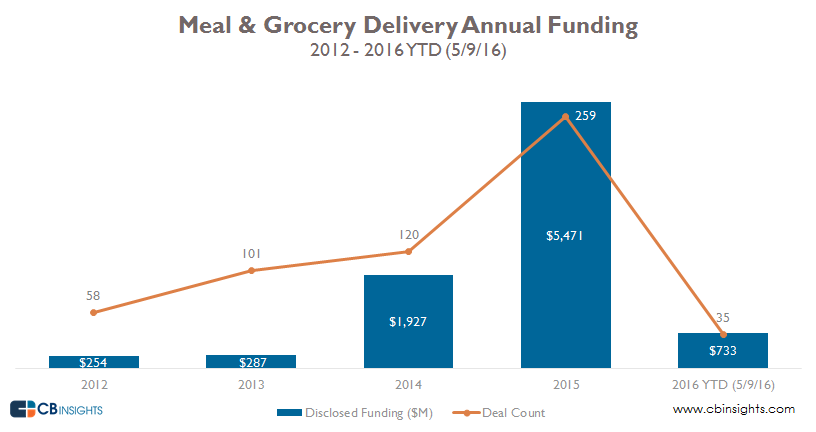 Q1’16 saw the fewest deals and dollars since Q4’14. This follows the record 2015 peak for food delivery funding, with over 58 deals per quarter compared to the pace of 20 to 30 deals seen previously. Financing peaked in Q4’15, when nearly $2B flowed into the sector. 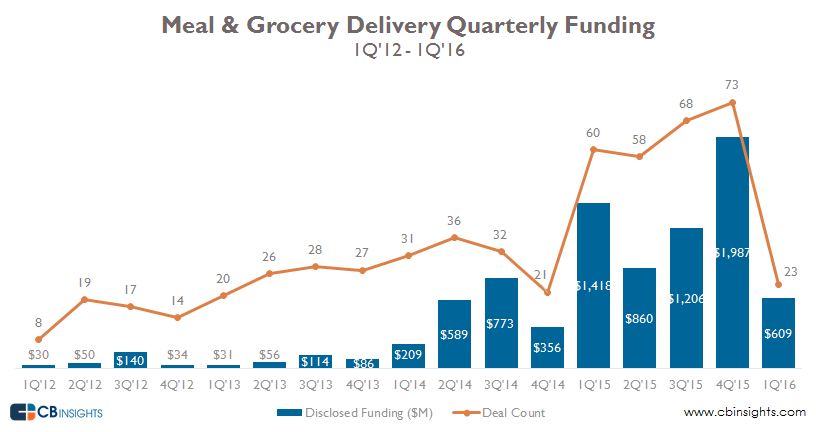 Deals to food delivery have trended toward later-stage companies over time. Seed/angel deals saw their share decrease from 62% of deals in 2012, to 51% of deals in 2015. Series A, B, and C transactions all increased their deal share over the same period.

Investors have shown an even more distinct preference for later-stage companies in 2016 year-to-date, with seed/angel deals falling to account for a new low of 14% of deals, while Series C and D deals hit new share highs of 17% and 6%, respectively. 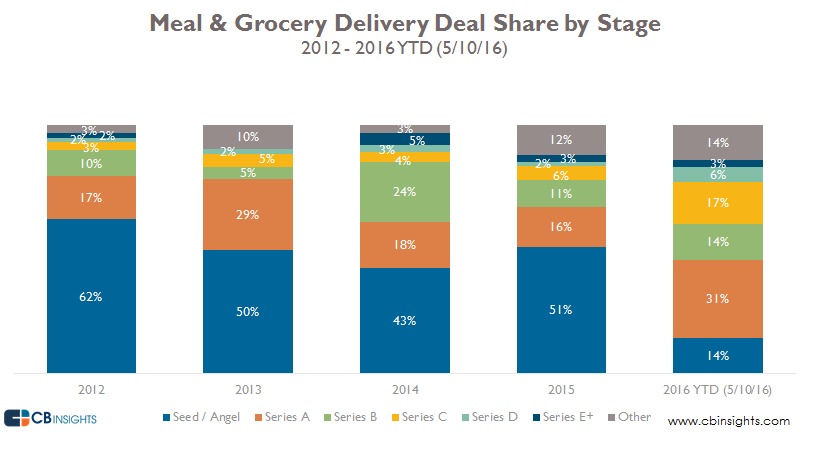 Dollars reflect the increasing weight of funding to later-stage startups in food delivery.

The disproportionate dollar share to “other” deals is explained by three major corporate minority rounds: $1.2B to Ele.me by Alibaba Group and Ant Financial Services, $563M to Delivery Hero by Rocket Internet, and $42M to Shenghuo Banjin by Alibaba Group. Our “other” category also includes convertible notes. 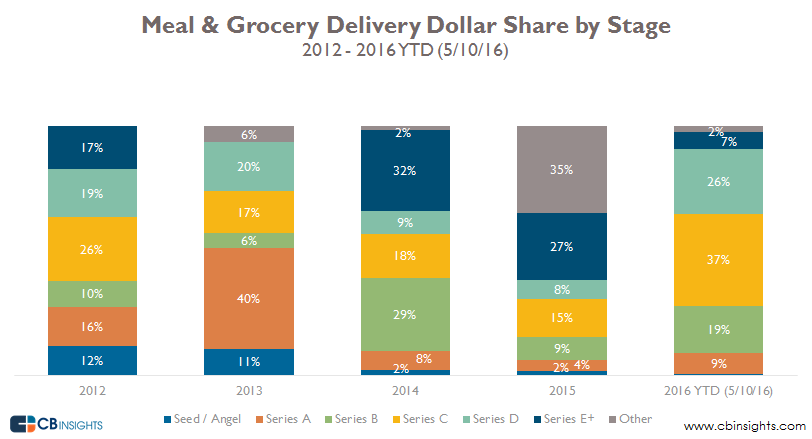 Deals and Dollars by geography

However, the dollar breakdown looks rather different. China and Germany capture a disproportionately large share of food delivery dollars, while the US, India, and the UK get squeezed.

China’s five mega-rounds since 2012 (three to Ele.me and two to Womai) contribute to the nation’s 41% share of food delivery dollars over the five-year period, even as it took just 10% of deals. Germany has racked up six $100M+ mega-rounds: three to Delivery Hero, one to HelloFresh, and two to FoodPanda. 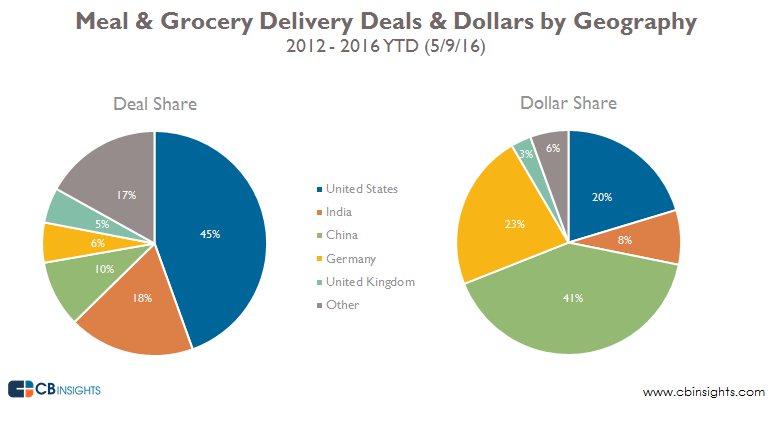 Chinese restaurant delivery service Ele.me is the most well-funded VC-backed food delivery startup, with over $2B in total disclosed funding. Another restaurant meal delivery service, Delivery Hero, ranks second with over $1B in disclosed funding. We note that the list is concentrated geographically in China and Germany, and that German internet conglomerate Rocket Internet has invested in three of the list’s top five.

Want more data about food tech startups and financing? Login to CB Insights or sign up for free below.