Beverage startups, including Soylent, Bulletproof, and High Brew Coffee drove much of the growth in Q2'17.

Deals to private food and beverage companies hit an all-time high of 102 in Q2’17, growing 31% from the previous quarter. If this investment pace continues throughout the second half of the year, 2017 may see new records in both deal count and investment dollars to the food and beverage industry.

Recently launched corporate venture funds led by top food corporates (including Campbell Soup, General Mills, and Kellog’s) contributed to the quarter’s growth as they continued to ramp up their activity, while there was also notable growth in beverages, which captured four of the quarter’s five largest deals.

Q2’17 food and beverage deals jumped to a new high of 102, worth $350M in aggregate disclosed equity funding. A social impact investment drove one of the largest deals of the quarter: The Rise Fund, a social and environmental impact-focused fund managed by TPG Growth, poured $50M into Hyderabad-based dairy company Dodla Dairy. Bottled meal startup Soylent also raised $50M, in a Series B that attracted Andreessen Horowitz, Google Ventures, and others, boosting Soylent’s total funding to $71.5M. 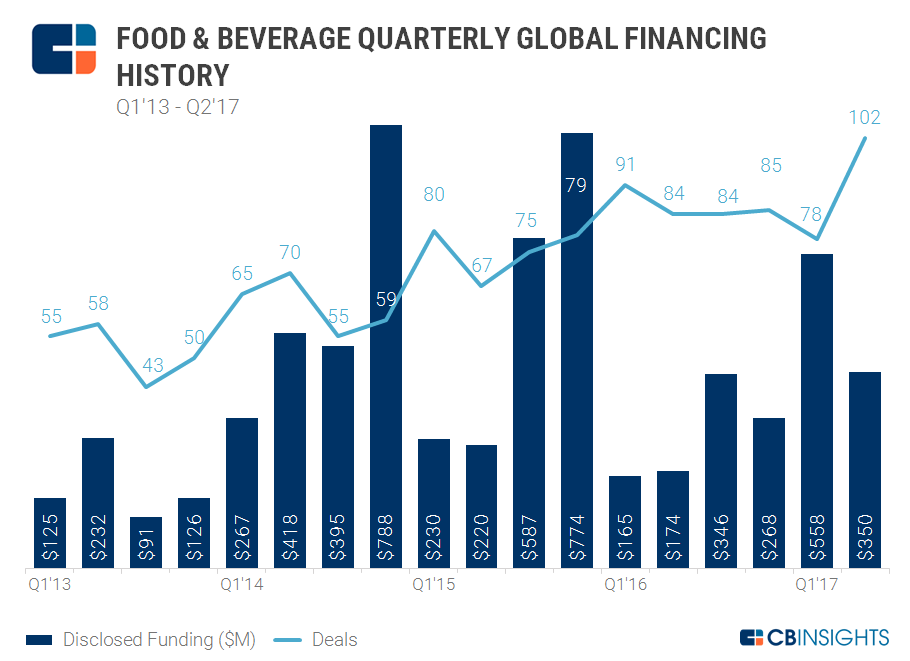 Startups working on new foods and beverages have the potential to upend the industry. Look for Food & Beverage Startups in the Collections tab.

Food and beverage companies attracted $908M in disclosed equity funding across 180 deals in H1’17. The largest deal to date went to an international conglomerate, the Europe-based Food Union, which raised $225M in private equity in February. Food Union manages several dairy and ice cream brands, including Rasa in Latvia and Isbjørn Is in Norway.

Another northern European company, Poland’s Superdrob, raised the second-largest deal at $51.5M. Soylent and Dodla Dairy (mentioned above) tied for third-largest deal, each bringing in $50M. If deals continue at their current pace, they should surpass last year’s total of 344 by 5%. With mid-year funding totals already at $908M, 2017 is on track to hit $1.8B—a significant uptick from 2016, when food & beverage companies attracted only $952M. 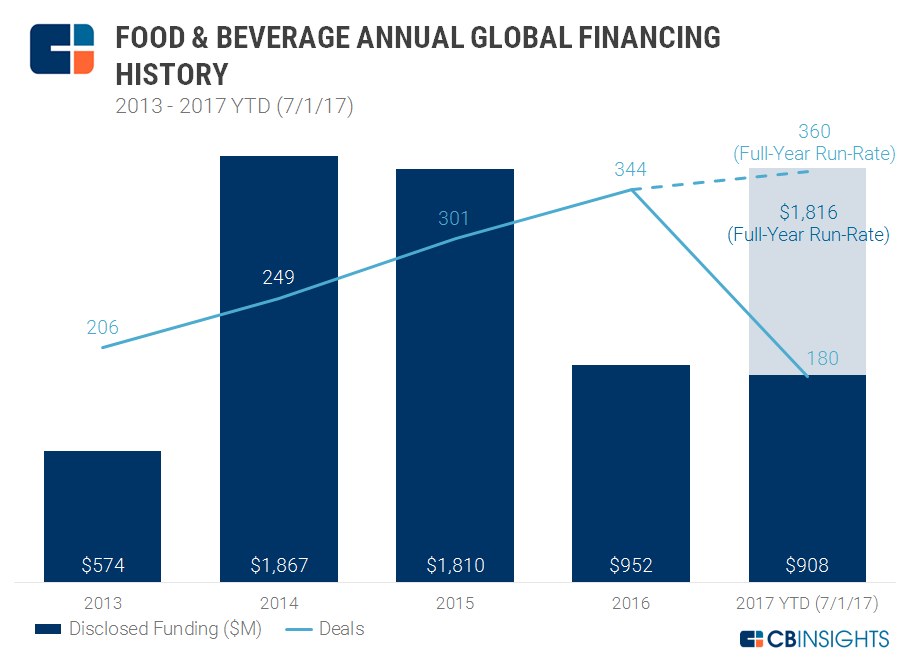 Want more data about food and beverage companies? Log in to CB Insights to check it out.