We use CB Insights' patent search engine to track patent activity in the food space from startups and tech incumbents.

A wide range of new technologies from startups and tech giants are beginning to impact our daily diets — from IoT technology supporting smart ovens that pop out perfectly baked meals, to bioengineering that turns cells in a petri dish into hamburgers on our plates, to RFID tags that accurately monitor our diets.

Zume is a Mountain View-based pizza delivery startup with robotic ambitions. The startup has patented a system to automate pizza cooking within the delivery vehicle, so it arrives freshly baked to the customer’s door.

The patent, granted in March 2016, describes a delivery vehicle that holds multiple cooking units. Partially cooked pizza would be loaded into the ovens on the truck. A computer system would monitor the truck’s route, and automatically adjust each oven to finish cooking each pizza as the truck approaches that particular customer’s house. The patent says this system would make sure food arrives warm and fresh at each customer’s house, regardless of driving time, traffic, or other delays. 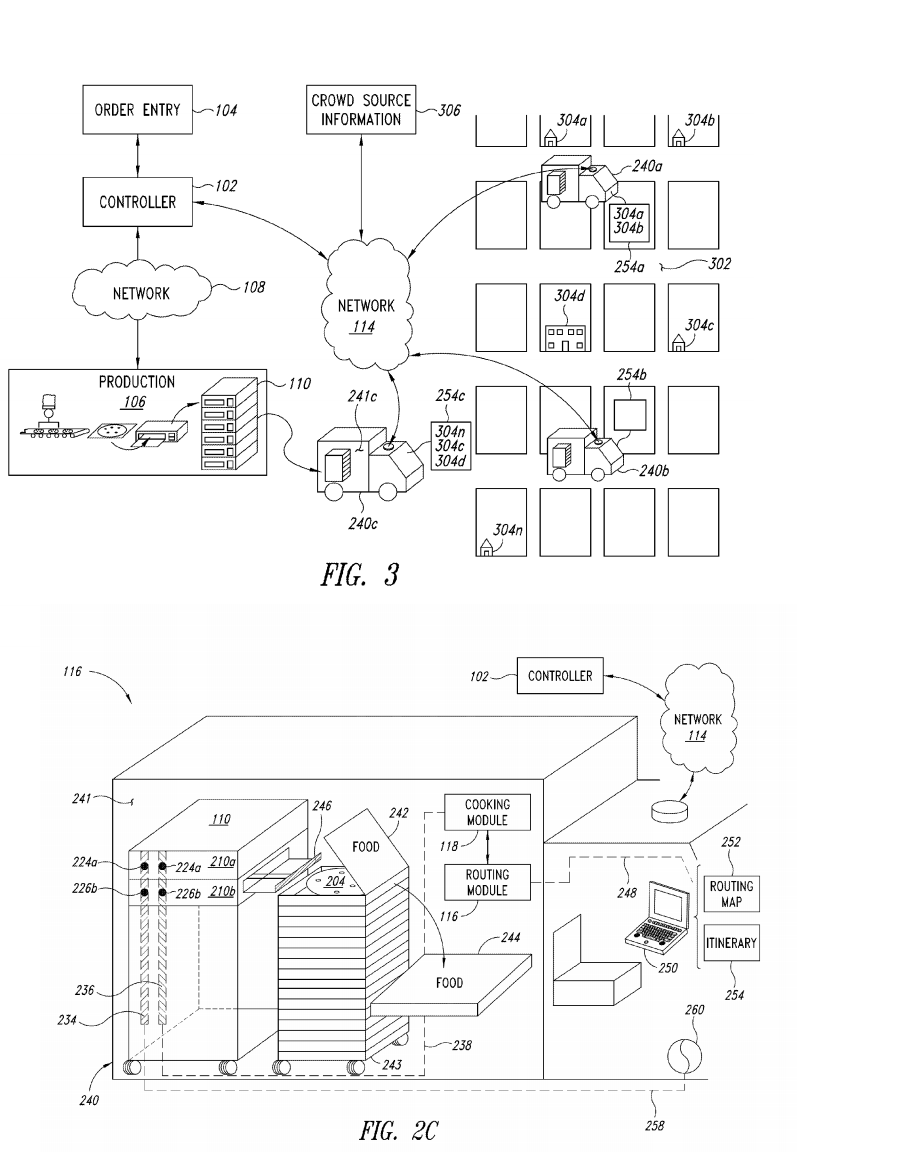 Title: Connected food preparation system and method of use

Smart oven startup June has been granted over 20 patents to date. In May 2017, it was granted a patent titled “Connected food preparation system and method of use,” which includes sensors to automatically identify the food placed in the oven, and processors to automatically operate the heating element based on the food’s identity.

While cooking, the oven also continuously monitors the food’s temperature and appearance to determine when it will be done, how crispy it is, and other features. It can send cooking updates and even stream video of the food to users’ phones, and the patent says the oven will be able to improve its cooking methodology over time based on user feedback. 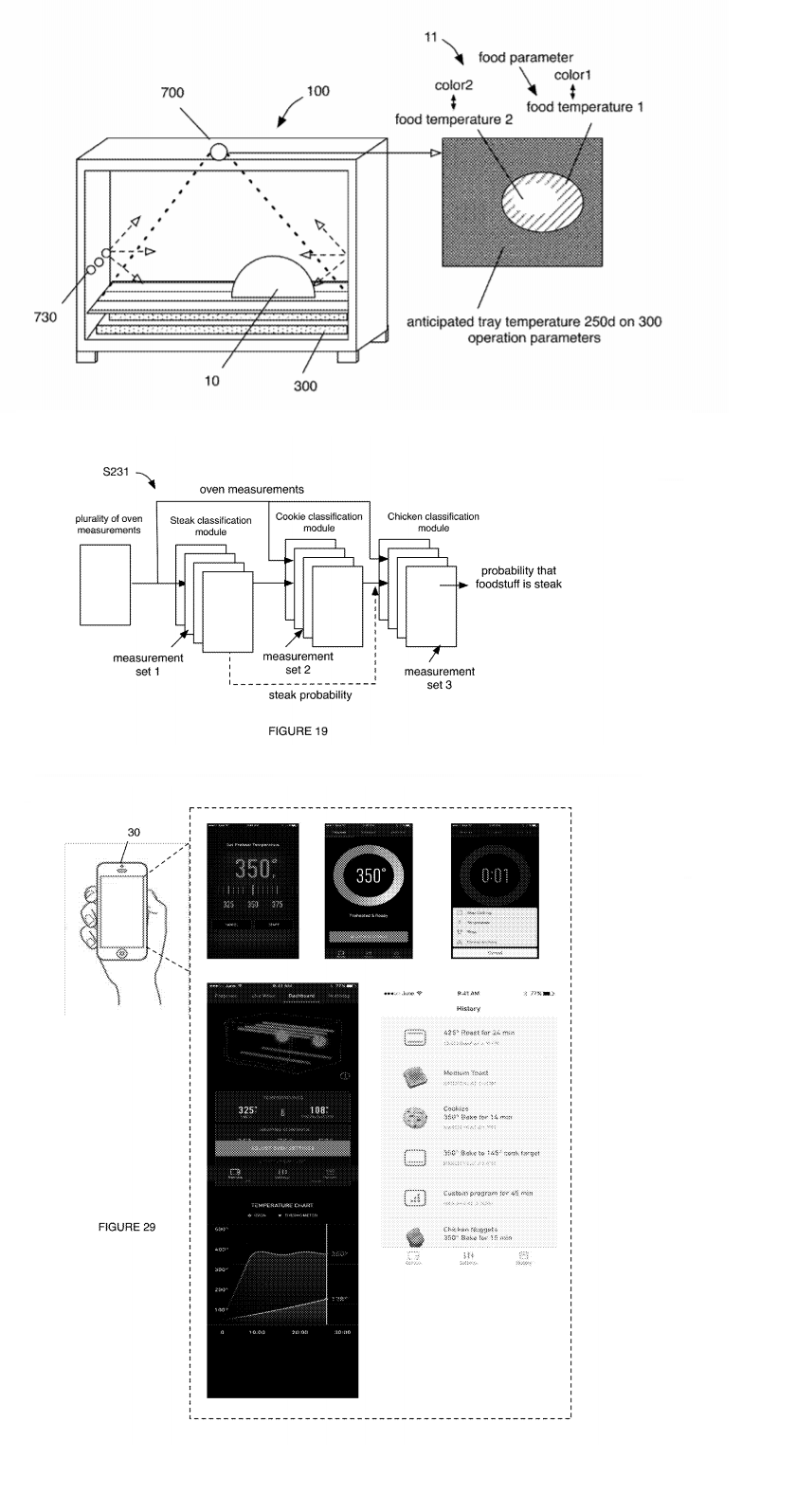 Juicero has come under fire lately for selling high-priced machines to turn produce into cold-pressed juice, when human hands can do nearly the same job. Juicero had poured significant engineering resources into its cold-pressed juicers, and was granted a patent on its machines in 2016.

Titled “Juicing systems and methods,” the patent describes a machine that extracts juice from cartridges, and which can be enhanced with “smart” features to track usage. 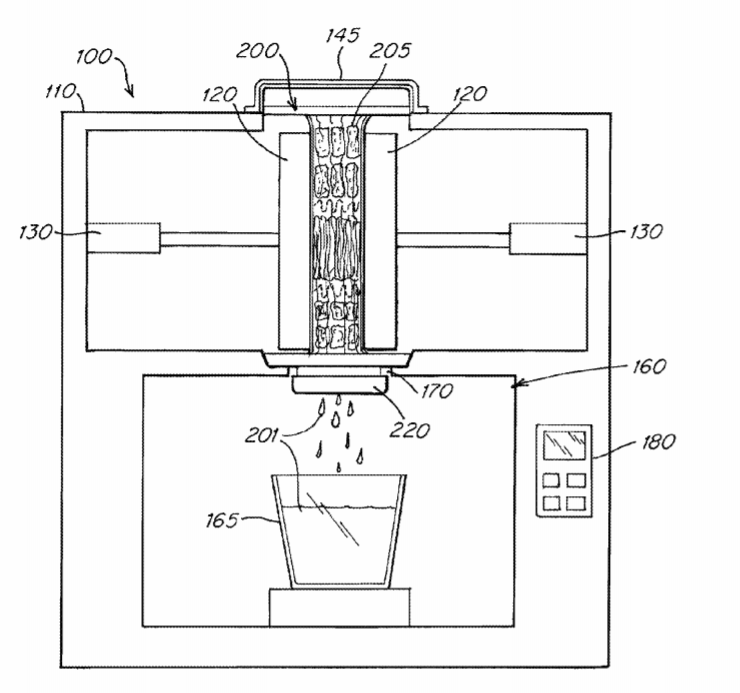 Singapore-based Rotimatic aims to sell an AI-powered, Wi-Fi-enabled appliance to make rotis. It was granted a patent in March 2017, titled “Method of making flat edible using a compact apparatus,” which details a machine that could be used to automatically make rotis, flatbreads, tortillas, crepes, and other flat dough products. The machine can store and dispense ingredients, mix them, knead the dough, flatten and shape the dough, and then cook it automatically based on sensors, or based on user input. 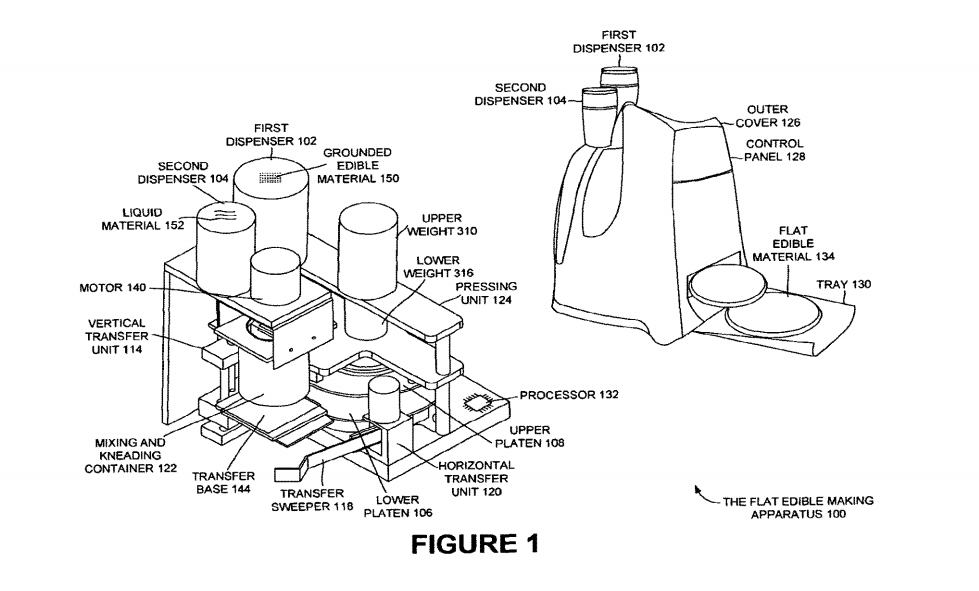 Startups working on new foods and beverages have the potential to change how and what we consume. Sign up for a free trial and look for Food & Beverage Startups in the Collections tab.

In this patent, Apple envisions software that would automatically encode RFID tags with the nutritional information of a customer’s food order (such as in a restaurant or cafeteria). The vendor would stick the RFID tag onto the food packaging at checkout. Then, the shopper can scan the tag with their phone to have the nutritional information automatically uploaded into a smartphone-based diet tracker.

As the patent describes, this system would be more personal than simply reading calorie counts off a menu, since the RFID tag data would be customized to each user’s order – for example, adding the calories if a user asks for extra cheese, or subtracting them if they ask for no pickles. 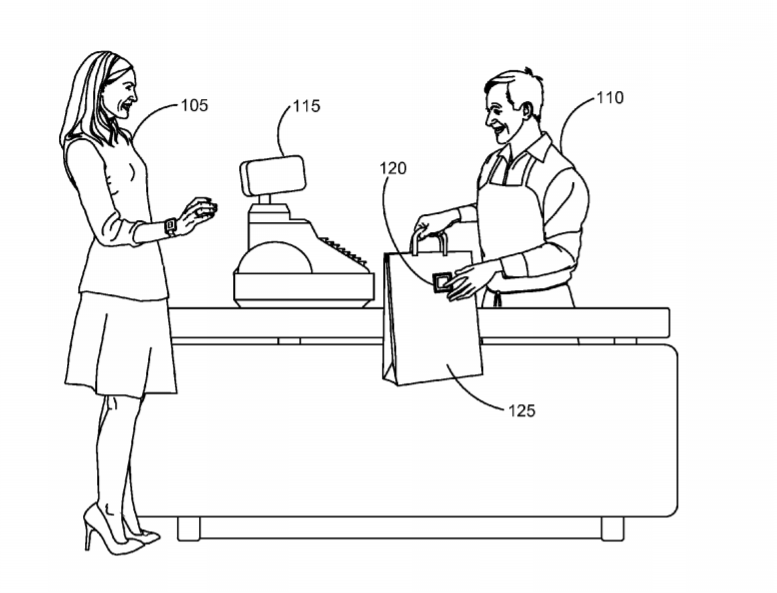 In the system in this patent by Walmart, the shopper would input information on who they are shopping for (i.e. family members) and the software would generate nutritional recommendations for each member. It would then suggest specific food items meeting those nutritional guidelines, and adjust its recommendations depending on what the shopper has already added to the cart. This could be used in stores or online. 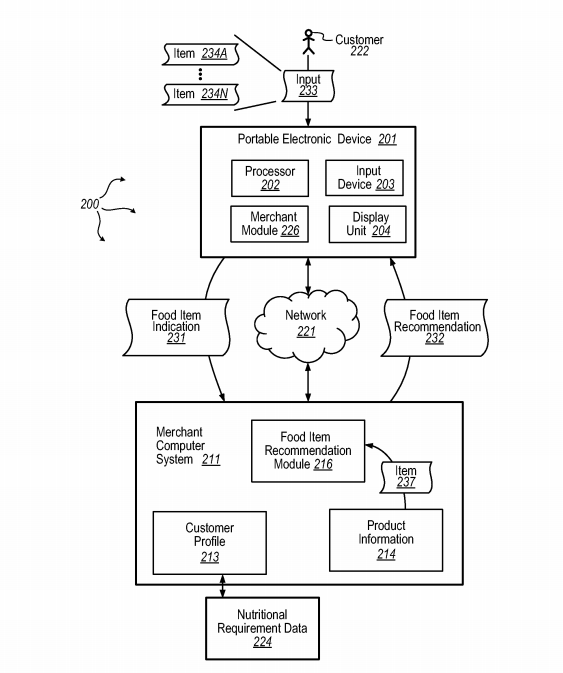 This patent, which we analyzed in more detail here, describes augmented reality glasses which would use visual monitoring to track wearer’s eating. The glasses could track the user’s nutrition each day, make food suggestions based on nutritional needs or flavor likes/dislikes, and use location tracking to understand when a user is in a specific restaurant, and suggest which menu items to order or avoid. 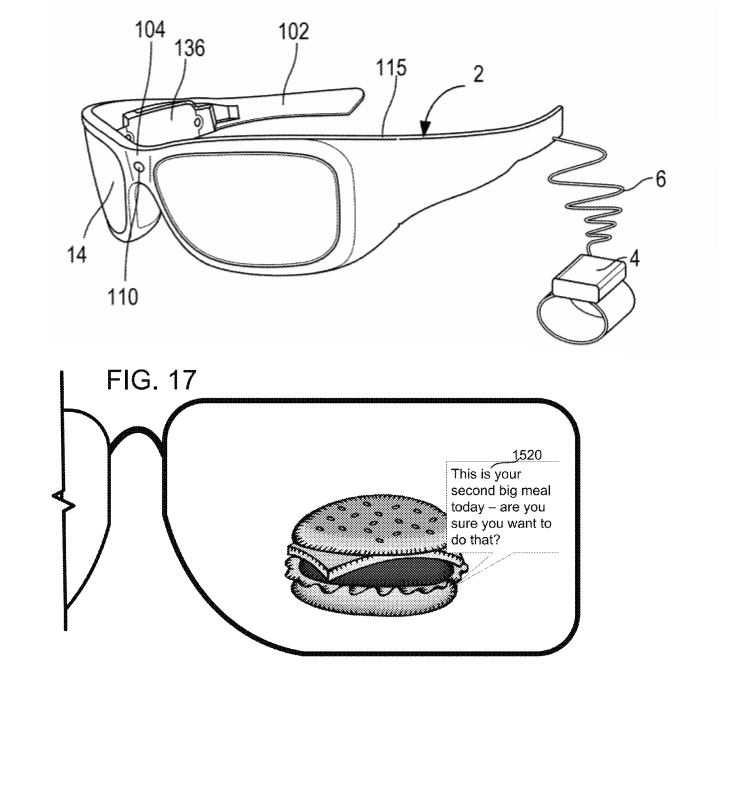 The process in the patent uses cultured animal muscle cells, combined with a plant-based hydrogel to nurture the cells, and added flavoring. The food product is then dehydrated, and the patent says it could be shaped into any dry food product, including chips, bars, or jerky. The food will be high-protein, gluten-free, and low in fat, according to the patent. Unlike some other meat substitute startups, which try to make tofu or plant products taste like meat, Modern Meadow actually uses animal cells, though the food would come from a lab rather than directly from an animal. See top and side views of the dehydrated chip below. 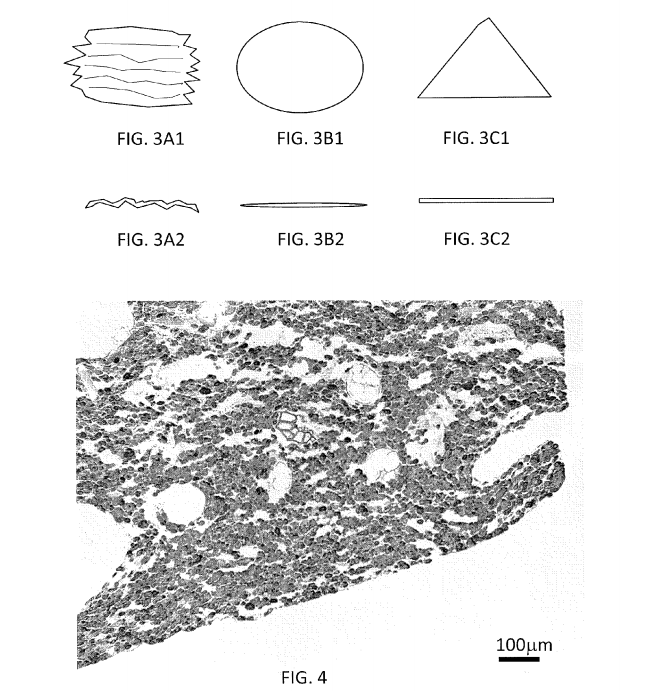 Title: Methods and compositions for affecting the flavor and aroma profile of consumables

Impossible Foods is developing a plant-based burger substitute that uses the heme molecule to replicate the flavor and texture of animal meat. Led by biochemist Pat Brown, it has raised over $183M from Khosla Ventures, Bill Gates, Google Ventures and others.

Impossible Foods has ten patent applications published to date; most recently in January 2017, it applied for iron ion-based formulations for “using food products to modulate the flavor and/or aroma profile of other foods… [which] can be formulated to be free of animal products.”

However, just one patent has been granted so far, interestingly focused on dairy rather than the company’s core business of meat. Titled “Methods and compositions for consumables,” it describes using enzymes to curdle non-dairy milk to produce non-dairy cheese. The patent provides pictures of the non-dairy cheeses, below. 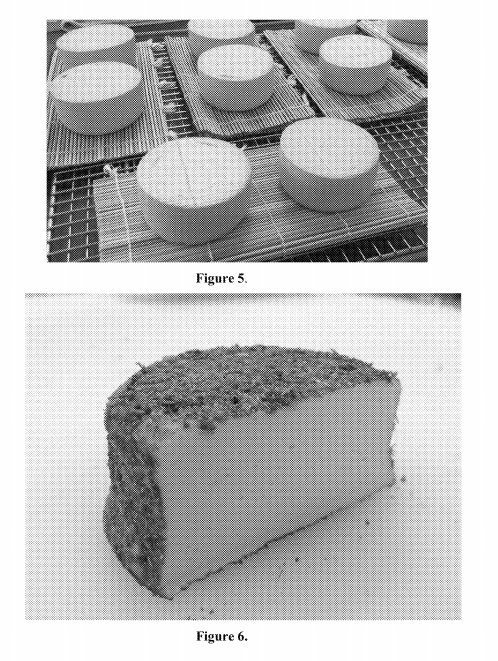 Hampton Creek has become known for its animal-free egg substitute, with which it sells vegan mayo, cookie dough, and other products. It has applied for a patent on plant-based egg substitute in 2012 and again in 2016, though it has not yet been granted. The chart below shows how plant-based substitutes compare to standard eggs in one metric – muffin texture. 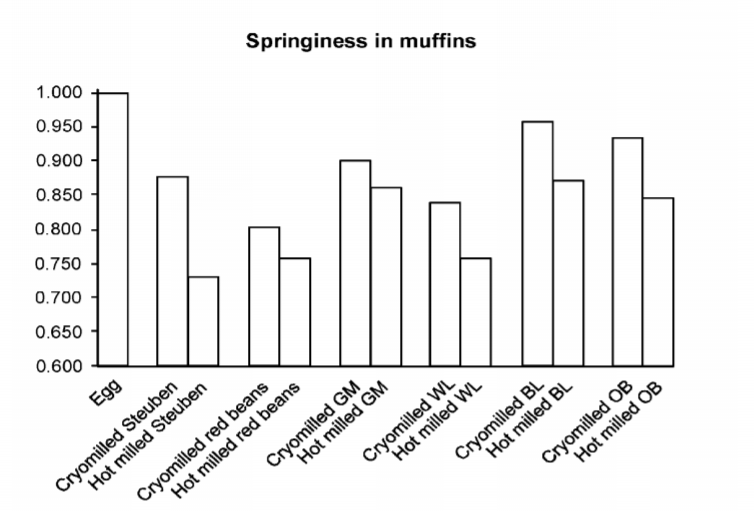 Loliware, which attracted investment from Shark Tank, has patented its main product of an edible cup. Loliware sells cups in various flavors, such as Tart Cherry or Vanilla Bean, which can be eaten. 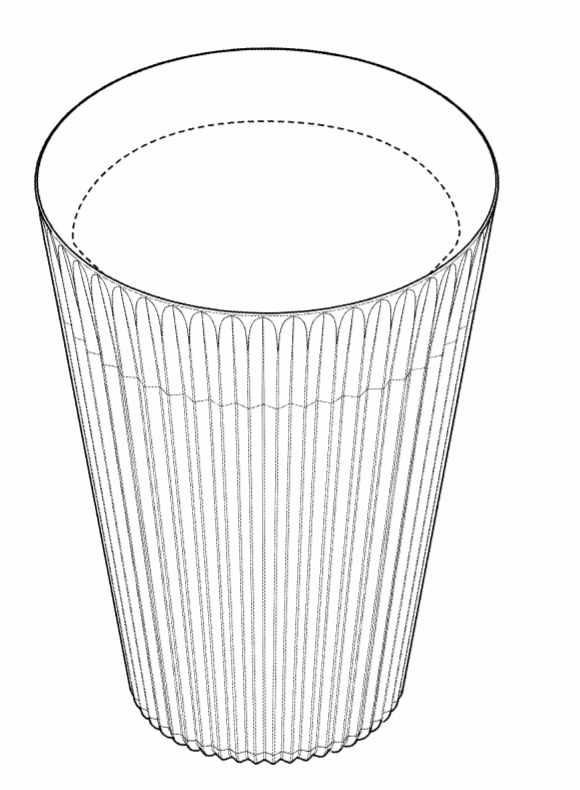