Institutional seed capital is an invaluable source for startups. As the number of institutional seed-stage firms, often referred to as micro VCs, has ballooned, founders have many choices of seed investors. According to our database, there are nearly 350 micro VC firms in the US that focus on bridging the gap between angel funding and Series A rounds.

This influx of seed capital makes the decision process for founders difficult. A founder must pick investors that not only can help the company reach critical milestones, but also help them secure their next round.

Follow-on rate is strong evidence that an investor is not only adept at picking good companies and adding value to their portfolio companies’ operations, but also at guiding a company to downstream investors for the next round of financing. Note that most micro VC firms only participate as a lead or co-lead in the seed round.

Founders want to build big, iconic companies. To scale and capture a big market usually requires an escalating series of capital investments. The biggest hits almost always follow this path. While exceptions like Veeva exist, it remains rare to build a company of scale without securing many rounds of financing.

Today, follow-on rates matter more than ever. The economic reset that we’re experiencing has created choppy waters for all stages of startup funding. Macro instabilities caused many investors to pull back on capital deployment (and valuations), and to require more traction before investing.

We analyzed follow-on rates for seed-stage VCs using data from CB Insights. Since larger seed-extension rounds often serve as Series A rounds, we considered a follow-on round to be when a subsequent financing was greater than $2.5 million, regardless of how the round is otherwise labeled. We netted out any companies that were acquired prior to additional funding.

The table below lists follow-on rates for institutional seed-stage investors for vintage years 2010-2014 (2015 was statistically irrelevant as most seed rounds offer 12-18 months of runway). Traditional venture funds are those that employ a strategy around investing in seed-stage companies (i.e. Formation8, Crosslink Capital, Founders Fund, etc). 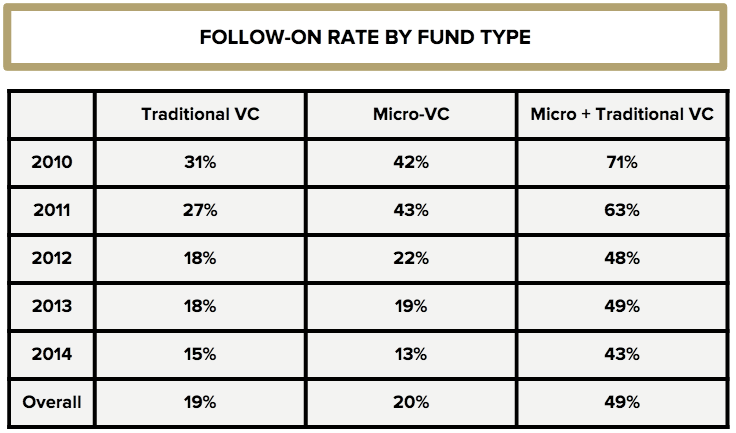 Several fascinating insights stand out to us from the data above.

Perhaps the more important question for a founder is this: Which micro VCs have had the highest follow-on rates—in other words, which firms have historically provided the best odds of securing the next round? 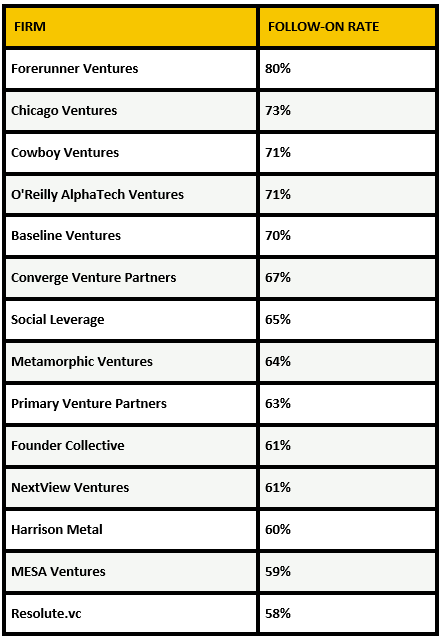 Probably as important as overall follow-on rate is the quality of follow-on financing. Attracting follow-on financing from top traditional venture funds, which have large bases of capital and high historic success rates, undeniably increases the long-term probability of success for a startup. While determining the top traditional venture firms is admittedly subjective, we used the CB Insights list of “smart money” investors for our analysis. 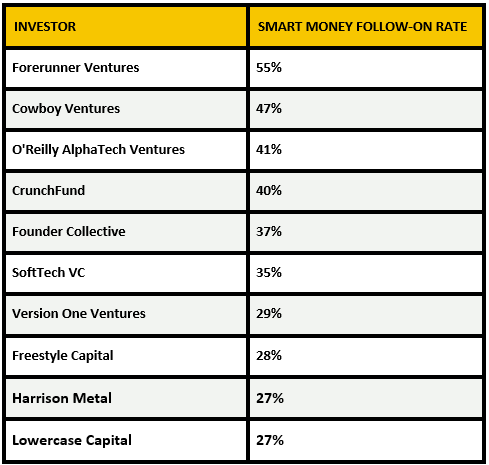 The next table looks at follow-in rates when the subsequent round is actually defined as a Series A and is not just a subsequent seed round larger than $2.5M.

Top smart money follow-on rates – subsequent round is ‘Series A’ 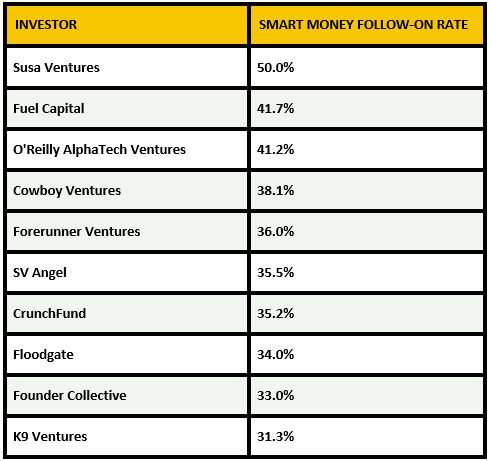 Attracting follow-on capital to enable scale is critical. As an entrepreneur, it’s important to consider your seed stage syndicate’s ability to help you raise your next round.

Samir Kaji is a managing director at First Republic Bank, where he leads a team managing venture capital and startup company relationships. He has spent over 15 years working within the venture capital industry. During this period, he has assisted and/or advised over 600 companies and 300 venture capital firms. Prior to joining First Republic, Samir spent thirteen years at Silicon Valley Bank, where he completed over 400 debt transactions, totaling over $4B in committed capital. Samir also has been an active angel investor in both venture capital funds and early-stage companies. Samir is a graduate of San Jose State University, where he earned his bachelor’s degree in finance, as well as Santa Clara’s Leavey School of Business, where he earned his M.B.A., with a concentration in finance.

Paul Arnold is the founder and managing partner of seed-focused fund Switch Ventures. He brings startup experience, investment know-how, and business strategy to the table. Paul invests in talented founders disrupting how things work. He partners with them to expand their businesses and scale to the next level. As an executive and early employee at AppDirect, he grew the company through multiple rounds of scaling and funding. Before that, he drove strategies for some of the biggest names in tech at McKinsey & Company.