First Round Capital is famous as a choice investor for early-stage firms. Here's a look at their recent funding and exit trends.

Founded in 2004, First Round Capital has quickly become an eminent venture capital firm by spotting future unicorns such as Uber, Square, and Blue Apron. A key factor to their success is in their post-investment support system, through which founders and companies are assisted frequently by First Round partners and each other to pool talent recruitment and generally solve problems and assist in company growth. Coupled with programs that specifically target early-stage startups such as the Dorm Room Fund aimed at entrepreneurs in college, FRC has made a name for itself as a well-known early investor for growing startups.

We’ll discuss trends and highlights in First Round Capital’s portfolio over the past few years by analyzing the following dimensions:

First Round Capital’s strategy is to find and finance companies early on, with a focus on the seed stage, to help shape and build their portfolio companies, and then contribute additional funding as the company grows. While most of their first investments are at the seed stage, FRC also sometimes enters in large Series A rounds and participates in follow-on investments to their portfolio companies across all later stages.

Interestingly, FRC’s deal volume began to decrease significantly right around July 2015. Just several months prior, at the end of Q1’15, the firm published its quarterly LP Letter wherein co-founding partner Josh Kopelman warned that the frothy valuations in the investing climate had changed deal economics and First Round’s calculations when deciding whether or not to make an investment:

We think that there’s a real power to understanding the math of the market. I believe that many of the new crop of seed investors may not be aware of the “bet” they’re making — they’re not explicitly focused on the new math that results from increasing entry prices. We understand that our conviction in our decisions needs to be meaningfully higher in order to invest at a meaningfully higher valuations.

The data show that First Round Capital’s deal slowdown continued into the second half of 2015 and that the frequency of their deals has only started to rebound in early 2016.

Some of the firm’s notable recent deals include:

Below is a graph of First Round Capital’s monthly investment participation (deals and funding participation) over time from their profile on CB Insights.

FRC generally keeps their average deal size below $20M, but will occasionally join a larger investment round that raises the average deal size of the rounds they participate in significantly. The funding spike in Q2’15, for example, can be explained in part by late-stage follow-on rounds with First Round’s participation that went to Blue Apron ($135M Series D) and Refinery 29 ($50M Series D).

In Q2’16, average deal size peaked again to the highest level over the past 5 years. The figures were bolstered by large deals to Eero ($50M), Clover Health ($165M), and MemSQL ($36M). Median deal size peaked in Q4’15, when half of the deals involving First Round were for amounts greater than $20M.

Below is a graph from the Investor Analytics tab on CB Insights that shows trends in average and median deal size for rounds involving First Round. 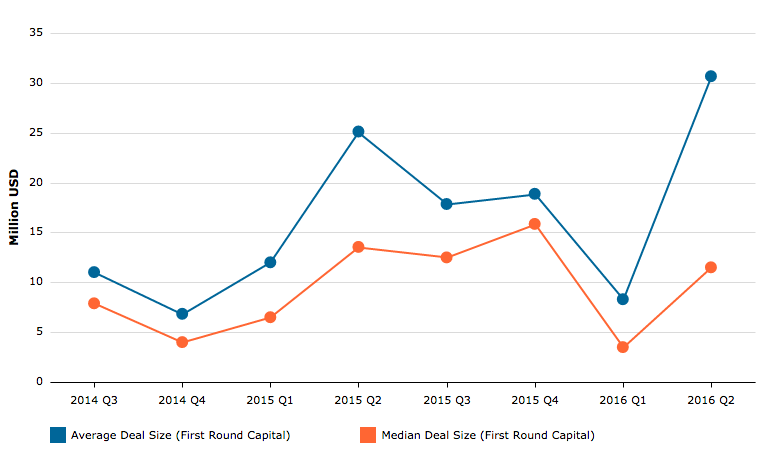 First Round Capital has had many successful exits throughout their 12 years of existence as a VC fund, including three topping $1B and more than a dozen companies over $100M. Save for three companies that went public, the vast majority of FRC’s successful exits were acquisitions.

Here are some of their notable exits within the past 3 years. First Round first invested in all these companies at the Series A stage:

The firm’s exits with disclosed valuations are plotted on the below scatterplot taken from First Round Capital’s CB Insights profile.

A majority of First Round Capital’s investments are focused on the internet sector, but their overall portfolio has diversified into healthcare, industrial, and consumer products. Most of their internet companies are services or e-commerce-focused ventures.

Within the SaaS field, most companies they’ve invested in focus on enterprise-facing applications in areas such as advertising, finance, and business intelligence. E-commerce deals tend to focus on marketplace and apparel startups.

The industry heatmaps below show deal and funding activity per industry for the time period indicated by the orange slider. The size of the box represents the number of deals and the darkness of the blue represents total funding amount. 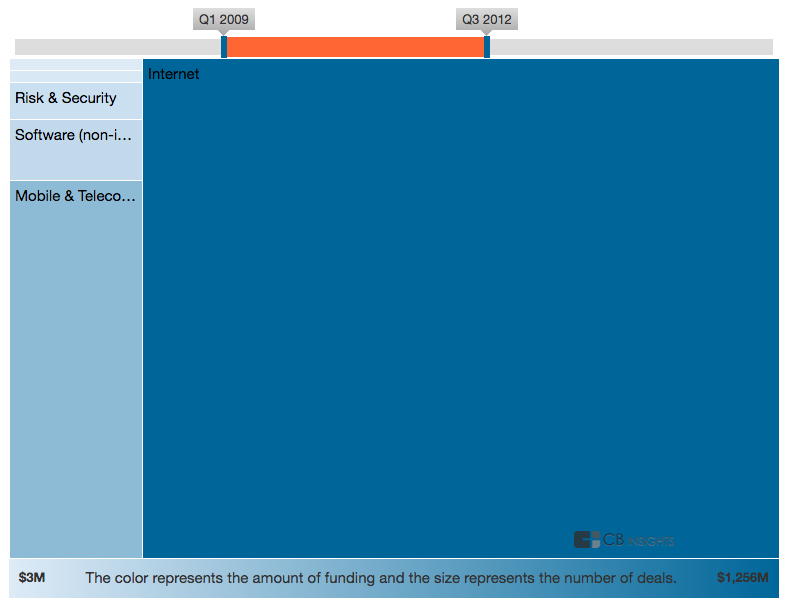 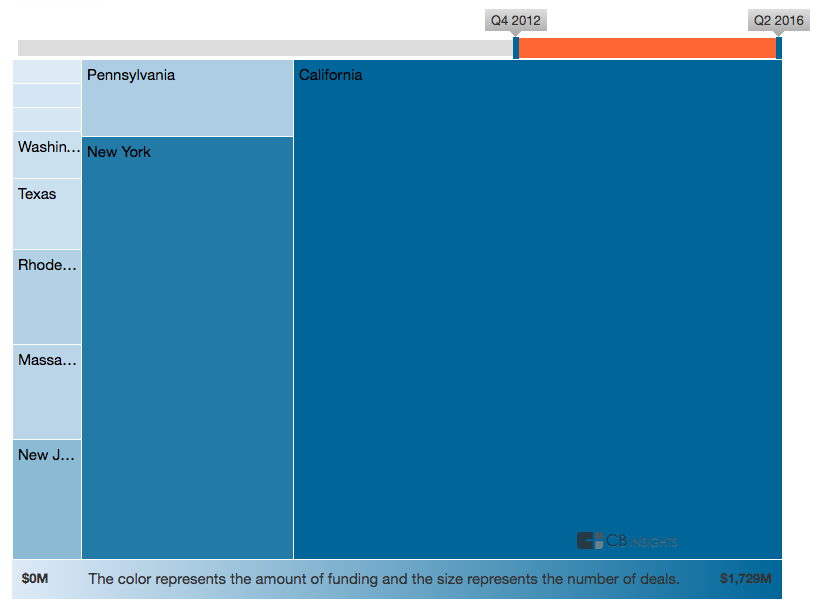 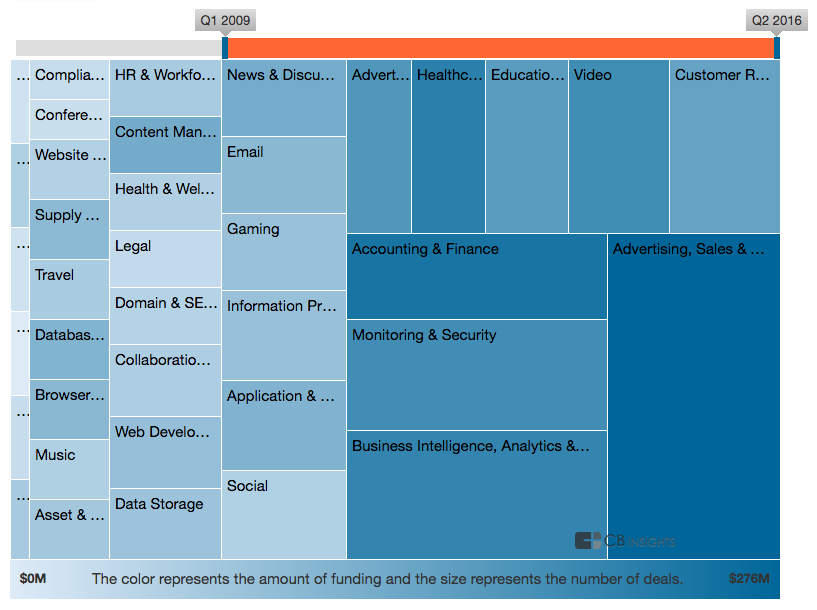 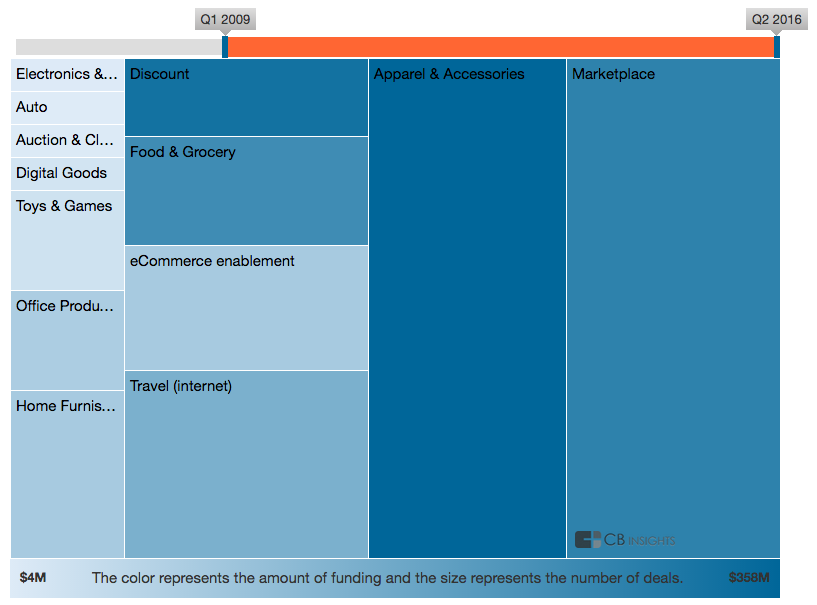 First Round Capital has offices in San Francisco, New York, and Philadelphia, which are represented in their top three regions for deal volume in the past four years. The proportion of deals to companies in these regions has actually been increasing over time, with Pennsylvania overtaking Massachusetts in number of deals.

Apart from these centers, FRC also tends to focus on companies based around the northeast US region as a whole, with deals to companies such as CustomMade in Massachusetts, Upserve in Rhode Island, and Boxed in New Jersey.

Other states where FRC regularly sources deals from include Colorado, Texas, and Washington, which each contribute 3 or 4 companies to FRC’s portfolio. FRC’s well-funded companies from these regions include Bazaarvoice (Texas) and Gnip (Colorado). 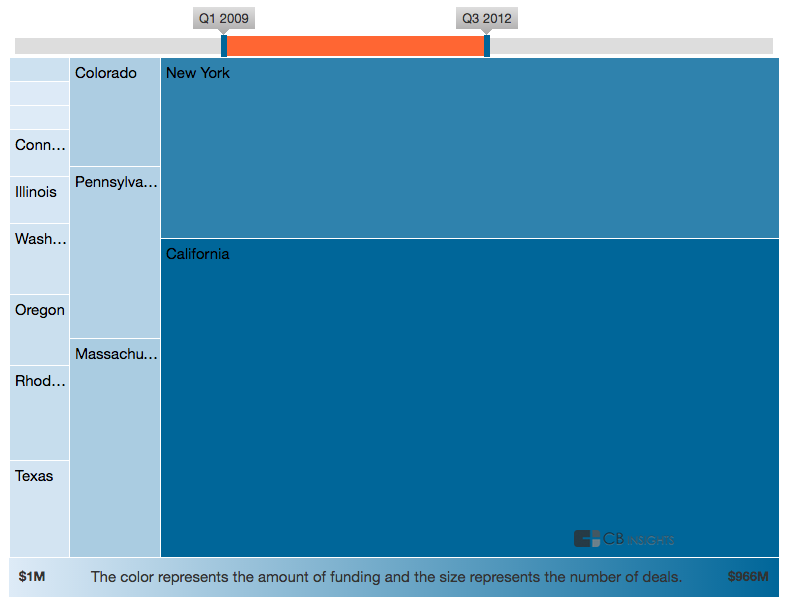 Roughly two-thirds of FRC’s deals are at the seed and Series A stages, but the remaining one-third is divided mostly between Series B and C deals that are on average ten times larger than their seed investments.

As consistent with the data above, deal activity has been slowly declining over the past five years across all investment stages, with the exception of Series D. Notable recent deals at that stage with First Round’s participation include a $135M funding round for Blue Apron and a $15M one for ModCloth.

Almost all of FRC’s new investments are at the seed or Series A stage, in alignment with their strategy of being a company’s first institutional investor. However unlike other seed investment firms, First Round Capital prefers to continue investing in companies after initial funding, resulting in slightly more follow-on deals in most years.

Note the consistency of their investment trend, which aligns their view of keeping a consistent broad investment strategy across business cycles (i.e. not growing fund sizes or speeding up investment pace depending on supply of capital). In addition, Q3’15 was a notable outlier with the lowest percentage of new deals closed, at around 20%. As previously mentioned, that quarter marked a slowdown of deal activity, on the heels of FRC’s LP letter expressing concern over the ramp-up in valuations.

The chart below from CBI’s Investor Analytics shows the proportion of First Round Capital’s new investments vs. follow-on investments in each quarter for the past five years. 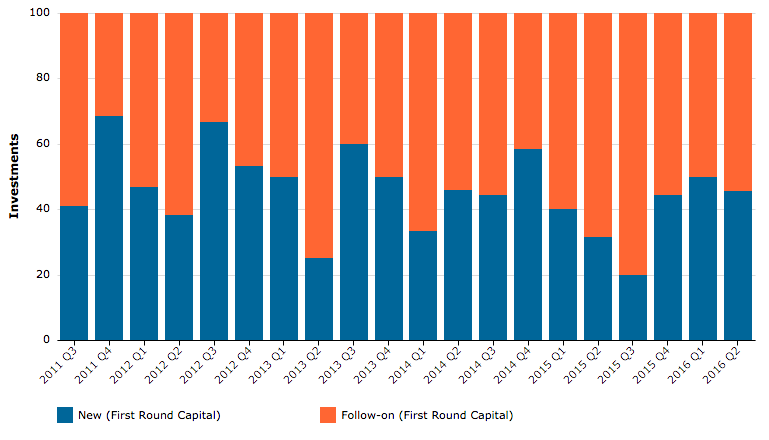 First Round Capital tends to share the most rounds with SV Angel, having joint investments in 53 companies together. Other active seed and Series A investors such as Google Ventures and Andreessen Horowitz also tend to invest alongside First Round.

Another notable trend is that First Round tends to immediately follow the footsteps of accelerator Y Combinator. 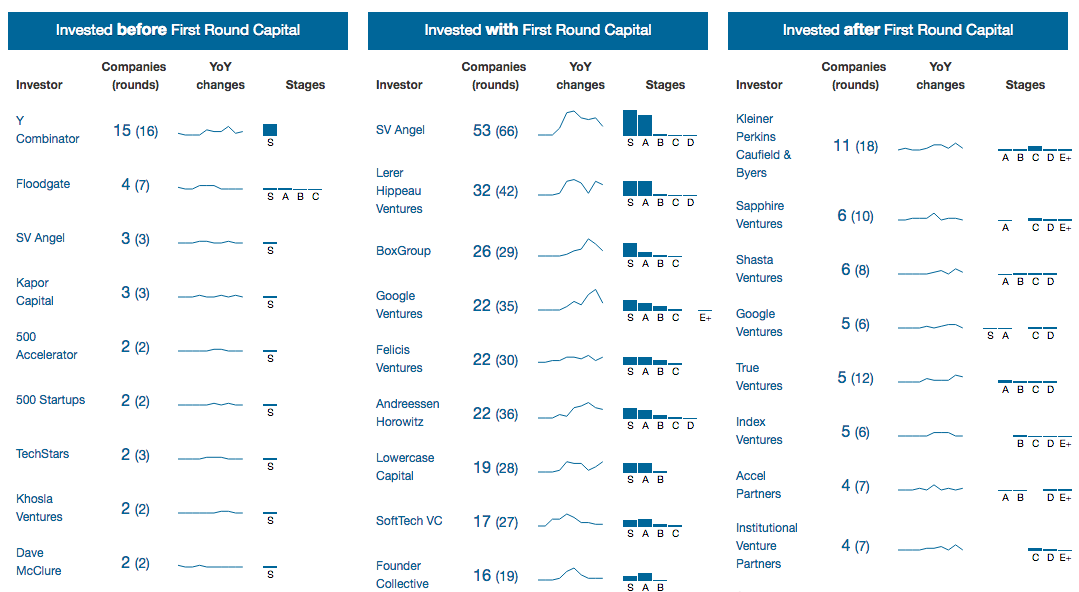 First Round Capital is currently investing out of its fifth fund worth $175M. FRC has continuously raised funds between $100M and $200M, keeping fund size consistent over time. While this is a substantial sum for seed stage investor, it is in tune with First Round’s strategy of participating in follow-on deals at Series A and beyond.

Apart from their main fund, FRC also raised a separate $3M fund as part of their Dorm Room Fund, to be managed by university students primarily for on-campus ventures. DRF generally invests in very early seed-stage companies through a $20k convertible note that converts into equity in a later funding round. By being able to invest in newer companies while delaying valuation concerns, DRF ties in with FRC’s positioning to be a startup’s first major investor.