Since launch, these consumer-facing fintech startups, which span from micro-investing and credit scoring to digital banking and cryptocurrency exchanges, have added 200M+ combined accounts globally.

Technological innovation across the financial services space is growing.

Companies are developing products and services aimed at transforming the consumer experience across everything from credit monitoring to personal finance.

As a result, consumer adoption is at an all-time high.

Today, there are over 20 fintech startups that have crossed the 1 million customer account mark, according to CB Insights data — including Acorns, Robinhood, SoFi, Coinbase, and Credit Karma, among others.

In this analysis, we look at why we are seeing massive consumer adoption now, which fintech products are gaining the most traction with customers, and what incumbents should be paying attention to next.

(This list includes venture-backed fintech startups that have reported account numbers publicly in the media or via company press releases. Fintech startups in China and India — including “super apps” like Paytm [350M users] and Ant Financial [800M mobile wallets] — have been excluded due to their population size relative to the rest of the companies).

Of the cohort of companies analyzed, we highlight a few notable stats below:

Startups are capitalizing on a growing consumer demand for more accessible fin services, and are focused on:

A number of specific factors are driving these changes:

These 3 core elements play especially well with younger generations. For example, they reduce the friction of having to show up physically to open an account. They also enable a process of self-onboarding, which not only saves time, but also reduces (or removes) the costs of services. 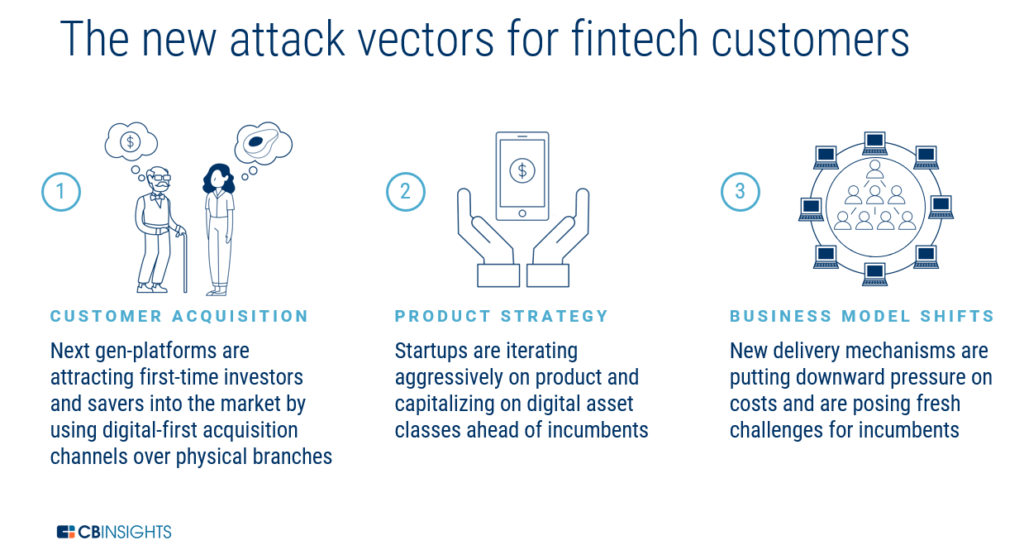 Types of products these startups launched to spark viral growth

A few products have been the focus of consumer fintech startups looking to drive changes across the space.

Digital-first banks, or “challenger banks,”  dominate as the vertical most of these startups are focused on when it comes to creating their first product offering.

There are 7 challenger banks that have reportedly crossed 1M+ accounts: Uala, N26, Monzo, Qapital, Chime, Nubank, and Revolut. Nubank is the largest challenger bank today and has 9M customers (across credit cards and bank accounts). 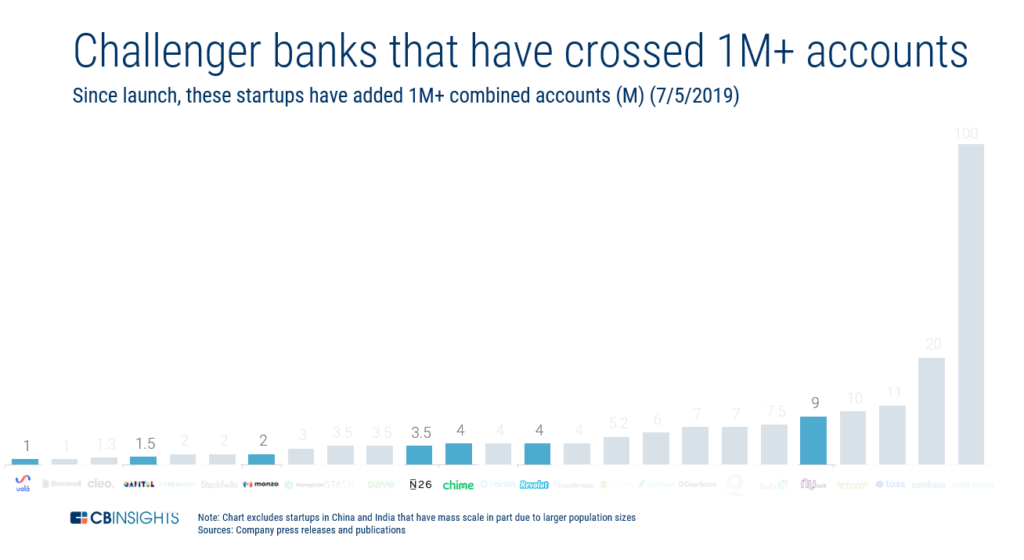 With the exception of Chime and Qapital, these fast-growing challenger banks have primarily launched outside of the US due to less stringent and fractured regulatory requirements for obtaining charters and licenses — which have enabled new tech companies to enter into banking.

In Europe, for example, Open Banking regulations have lowered the criteria for digital-first banks like Monzo and N26 to get limited charters and launch apps, even as they wait for regulatory approval for a full bank charter. Brazil’s Nubank, which launched initially as an alternative credit card provider, received approval to launch a bank last year.

Challenger banks are cropping up globally and we anticipate this vertical will continue to see more growth and more startups cross the 1M+ account mark.

(For an overview of the challenger bank landscape, check out our research on how 60+ startups are disrupting retail and commercial banking around the world. CB Insights clients can learn more about Open Banking in our research brief on what the rise of open banking means for fintech).

Cryptocurrency has been the most viral product that any of these companies have leveraged to launch their entry into the consumer fintech space. Coinbase and Circle, for example, were 2 of the earliest players to capitalize.

Coinbase, specifically, was one of the first cryptocurrency exchanges in the US — amassing 20 million users within just 2 years. This is more than incumbent brokerages like E-Trade — which has been in the market for nearly 4 decades — has managed to acquire, having seen less than 5 million customers in total. 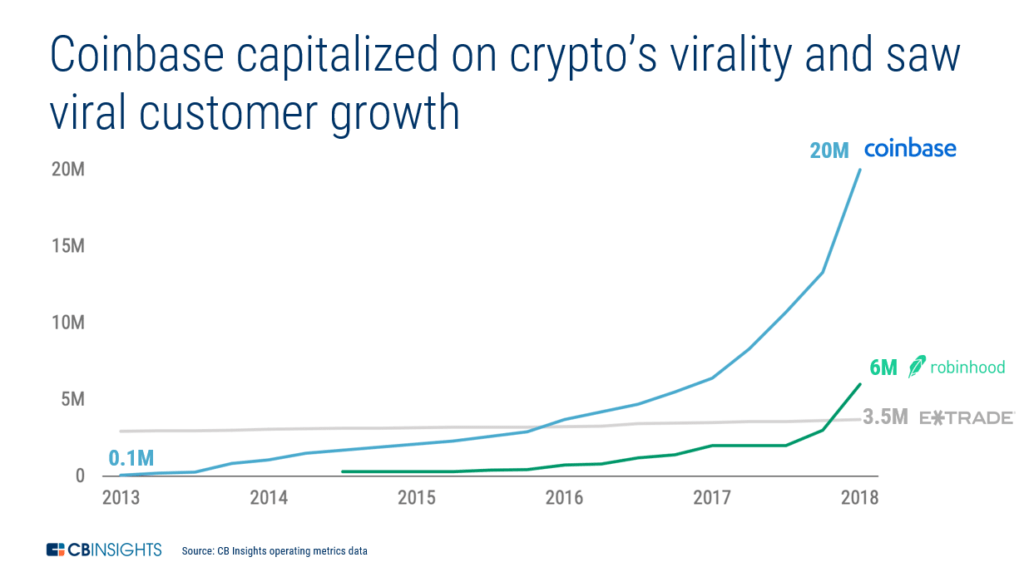 Other startups that have capitalized on customer demand for access to cryptocurrencies include stock trading apps EToro and Robinhood, and challenger banking app Revolut.

All 3 added 2M+ customers following their respective product announcements. Despite a cool down in the cryptocurrency markets in 2018, all have continued to grow their user bases, like EToro — which topped 10M accounts and launched in the US in early 2019. 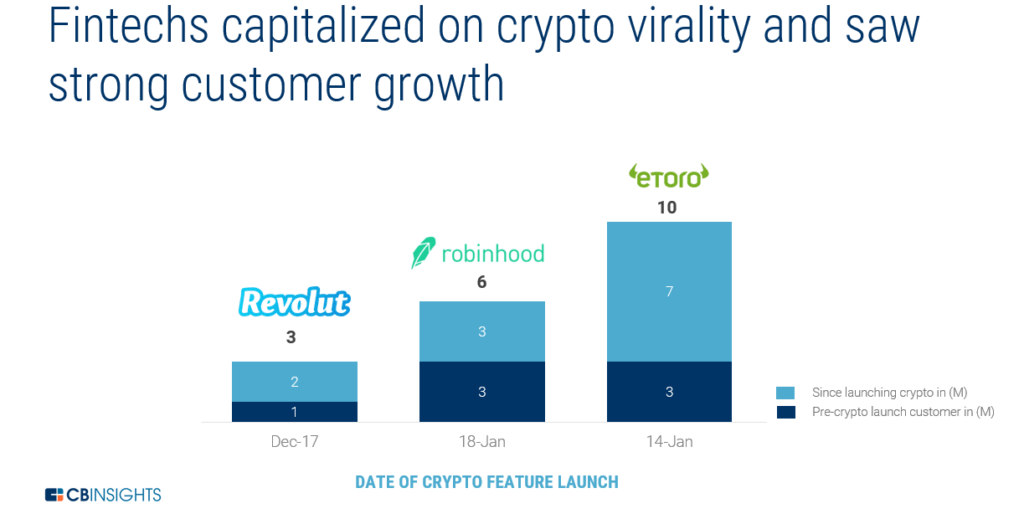 What’s next: how fintech business models are evolving to meet demand

Many of these startups launched as mono-line businesses to attack a core pain point for customers. SoFi, for example, initially launched offering alternative student loans with lower interest rates.

Other examples include micro-investing apps like Acorns or Stash, which started off targeting customers without any savings.

As these companies have grown their customer bases and raised subsequent rounds of funding, many have begun to move to a multi-line business model to generate revenue — especially as several give their initial products (like stock trading) away for free or at a low cost. 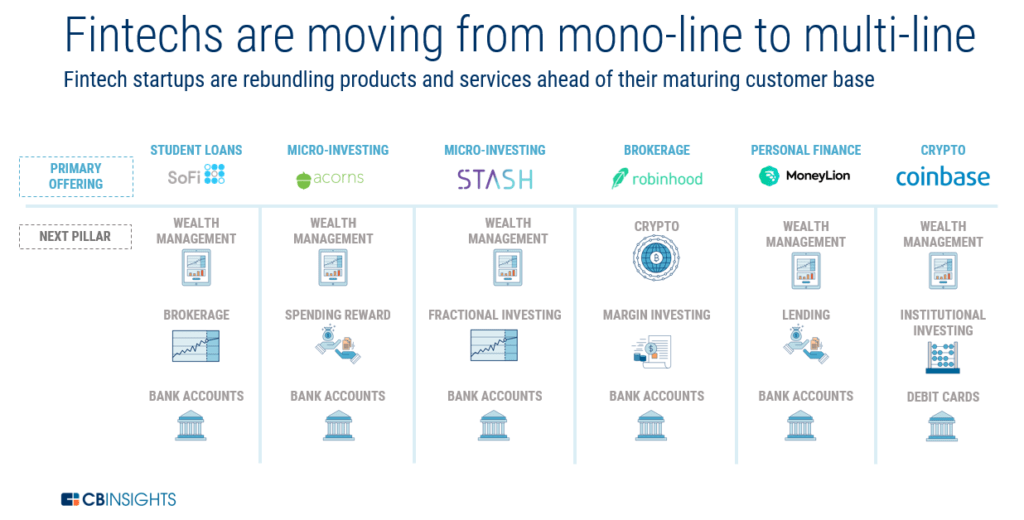 This “rebunding” trend is seeing massive concentration around bank accounts — especially as regulations like Open Banking have made it easier to launch bank accounts.

In the US, fintechs are partnering with banks to leverage their bank charters and launch bank accounts and debit cards. Debit cards are popular because startups can generate revenue from interchange fees and split a percentage of the revenues with intermediaries and bank partners.

Many of the fintech startups in the 1M+ account club have already started crossing over into bank accounts and debit cards, including Transferwise, SoFi, Stash, Acorns, MoneyLion, Coinbase, Dave, and Robinhood.

We expect more fintechs will look to launch bank accounts as they reach scale in their initial market and as regulations make it easier to do so.

(For CB Insights clients, we have written more about these trends in the brief “Why Are So Many Fintechs Launching Debit Cards?” and how banks are benefiting in our “How Fintech Companies Are Helping Small Banks Stay Relevant”).