The bulk of financial service firms' investments have gone to Circle Internet Financial, Coinbase, Ripple, and a handful of others.

The herd of new strategic investors is playing an increasingly important role in the health of the financing market for startups in the space. While quarterly deal activity dropped to its lowest point since Q2’14 in Q4’16, the quarter’s top two financing deals featured investments by major corporate and financial services players.

“Deploying distributed ledger technology in production at this scale is a watershed moment for the industry. The combination of technology and business expertise being contributed to this project from across the participating firms is unparalleled and the benefits are clear.”

To illustrate the boom of investment from financial services firms into the sector, we analyzed CB Insights data to plot each firm’s respective first investment in the space over time. As the chart illustrates, there’s been a plethora of first-time activity from corporates since August 2015.

It should be noted, though, that consortia are not included on the chart below. One such example is R3 CEV, which counts a bevy of banks and insurers including Credit Suisse, JPMorgan and Deutsche Bank collaborating to advance ledger solutions and standards that meet banking requirements. R3 has hit a few bumps of late, with Goldman Sachs and Santander – among others – leaving the consortium in favor of private blockchain investments.

As the chart below shows, strategic investments into bitcoin or blockchain startups over the past three years hit its apex in the fall of 2015 and into the winter of 2016. In recent months, Deloitte, Miami International Holdings (MIAX), and Credit China placed their first blockchain bets, with Deloitte taking a corporate minority stake in appropriately named blockchain settlement and payments platform SETL. In total, over 50 financial services firms or their strategic investment arms have invested in a bitcoin or blockchain-specific startup since the start of 2014. 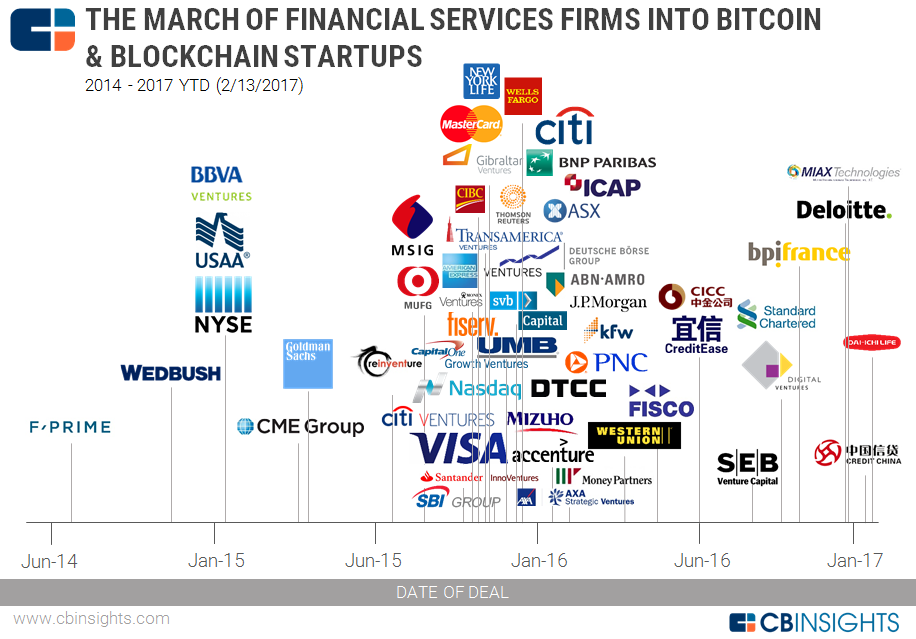 The original graphic from November 9, 2015 is shown below, which highlights the beginning of the acceleration of financial services firms investing in blockchain and bitcoin startups.

Of note, a relatively small number of startups have captured the large majority of financial services investments in the bitcoin and blockchain space. For example, the seven firms listed below – Circle Internet Financial, Coinbase, Ripple, BitFury Group, Blockstream, Digital Asset Holdings, and Chain — have received nearly $625M in funding and are all listed among the top ten most well-funded bitcoin and blockchain companies. Between them all, they count a significant number of financial services investors.