Early-stage investment activity into Fin Tech startups has increased for three quarters straight and reached 124 deals in Q1’15, a 12-quarter high in the number of deals and up 23% versus the same quarter a year prior.

Things don’t look to be slowing down as Q2’15 is on pace for largest amount invested since the start of 2012. So far, the Q2’15 deals include over ten $10M+ Series A financings, among them Ripple Labs’ $28M and Patch of Land’s $23.8M financings. Q2’14 holds the previous quarterly high, with early-stage Fin Tech funding reaching $437M in that quarter. 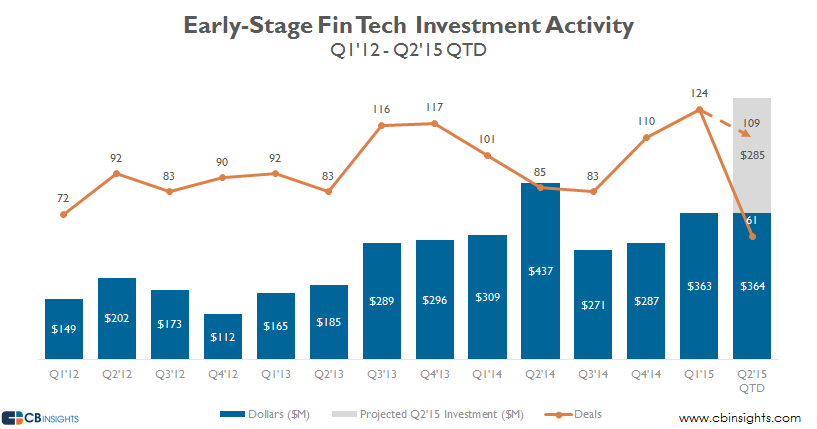 Ireland-based money-transfer company CurrencyFair topped our list. The company most recently raised a $10.7M Series A in April 2015 from Octopus Investments and Frontline Ventures. Germany-based modern-banking startup Number26 was second, as the company’s web traffic has increased drastically in the months leading up to its $10.6M Series A in April 2015.

Notably, 3 of the top 5 early-stage fin tech companies per Mosaic are based outside of the US.

The usual suspects topped the list of most active early-stage VCs in Fin Tech since 2012, with 500 Startups, Google Ventures, and SV Angel rounding out the top 3. 500 Startups’ more notable investments include Chain, a tool for developers to build apps related to the blockchain, as well as Lettuce, a small business finance-management tool that was acquired by Intuit in May 2014.

Google Ventures, the most active corporate venture investor overall in Fin Tech, also has made many early-stage bets in the space since 2012. Their notable investments include ZenPayroll, which recently raised a $60M Series B at a $560M valuation and Robinhood which raised a $50M Series B in May 2015. Google Ventures is a seed investor in both companies.

See below for the full ranking.

Want more data on early-stage Fin Tech companies? Login to CB Insights or sign up for free below.