Research Brief
1884
15 years after the dot-com boom that created e-commerce successes like Amazon and failures like Webvan, there's a new explosion in e-commerce startups, with over 2,000 deals in the last 5 years. 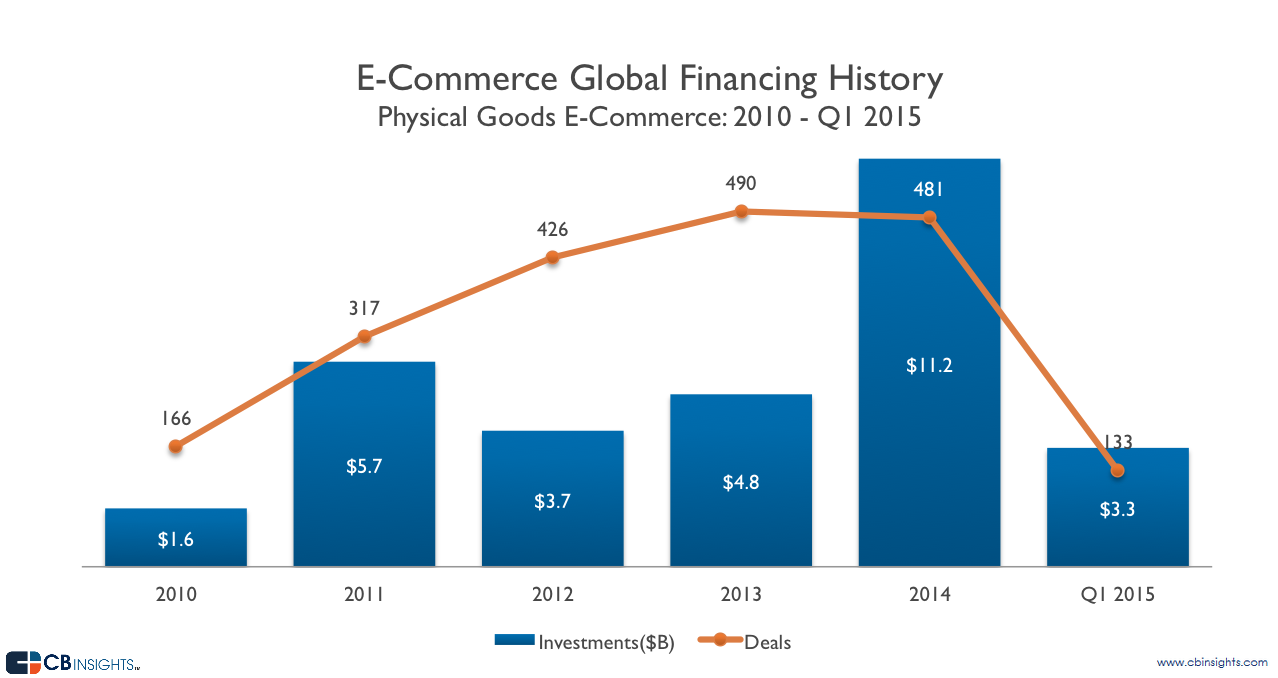 The quarterly breakdown gives us a more granular view of the market’s history. The quarterly chart above tells us that Q2’11, Q4’14, and Q1’15 were the strongest quarters, all reaching $3.3B+ in amount invested. However, Q2’11 was high in large part due to a $1.5B funding in China-based company Jingdong, by Walmart and other investors. The industry first crossed 100 deals in Q2’12. The largest deal in 2014 was Flipkart, which received $1B in Series G funding. 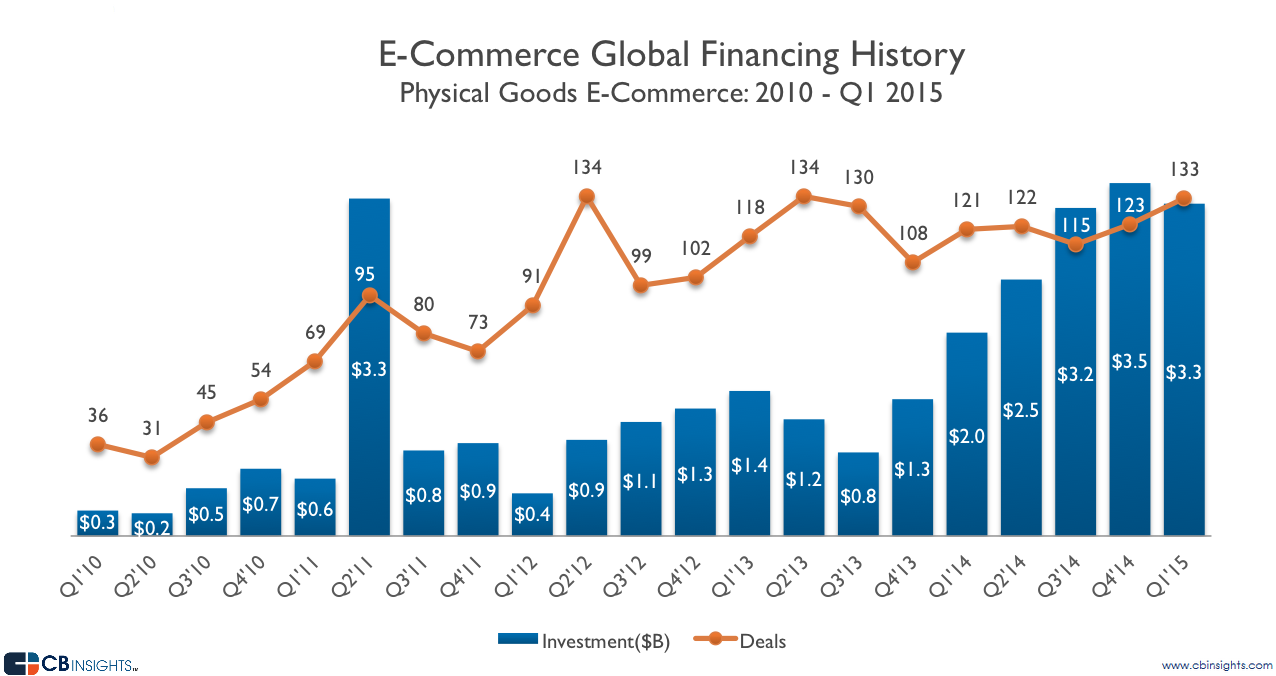 Over the years, early-stage funding (Seed and Series A) has consistently accounted for the most deals. The percentage of total deals that were early-stage ranges from 53% to 66%. This is contrasted with late-stage deals (Series D and Series E+), which account for a relatively low share of total deals: ranging from 5% to 13%. 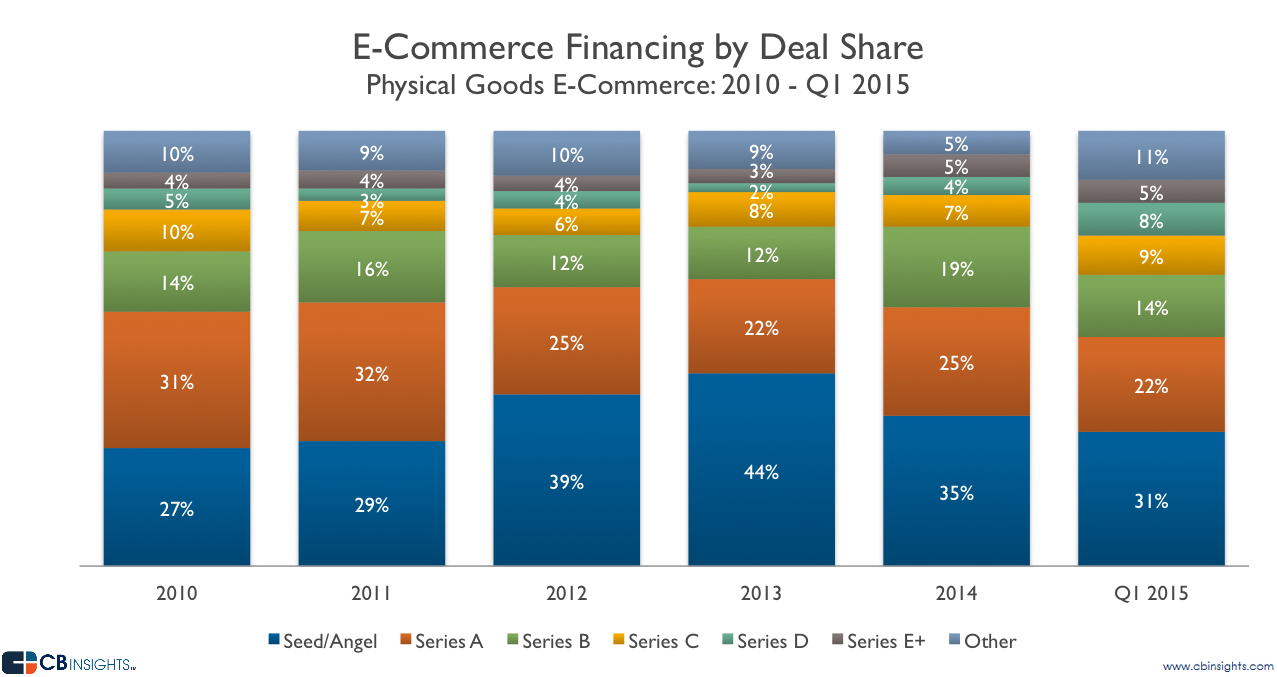 The breakdown of dollar-share by investment stage has been roughly consistent over the years, although Q1’15 showed a shift of dollars away from late-stage and to mid-stage deals. Late-stage e-commerce investment (Series D and E+) has ranged from a 25% to 47% share of total funding, with Q1’15 clocking in at a 43% share for late-stage deals. Mid-stage (Series B and Series C) investments ranged between a 29% to 38% share between 2010 and 2014, but shrank to 26% in Q1’15. Early-stage funding (Seed/Angel and Series A) ranged from an 8% to a 20% share of dollars. 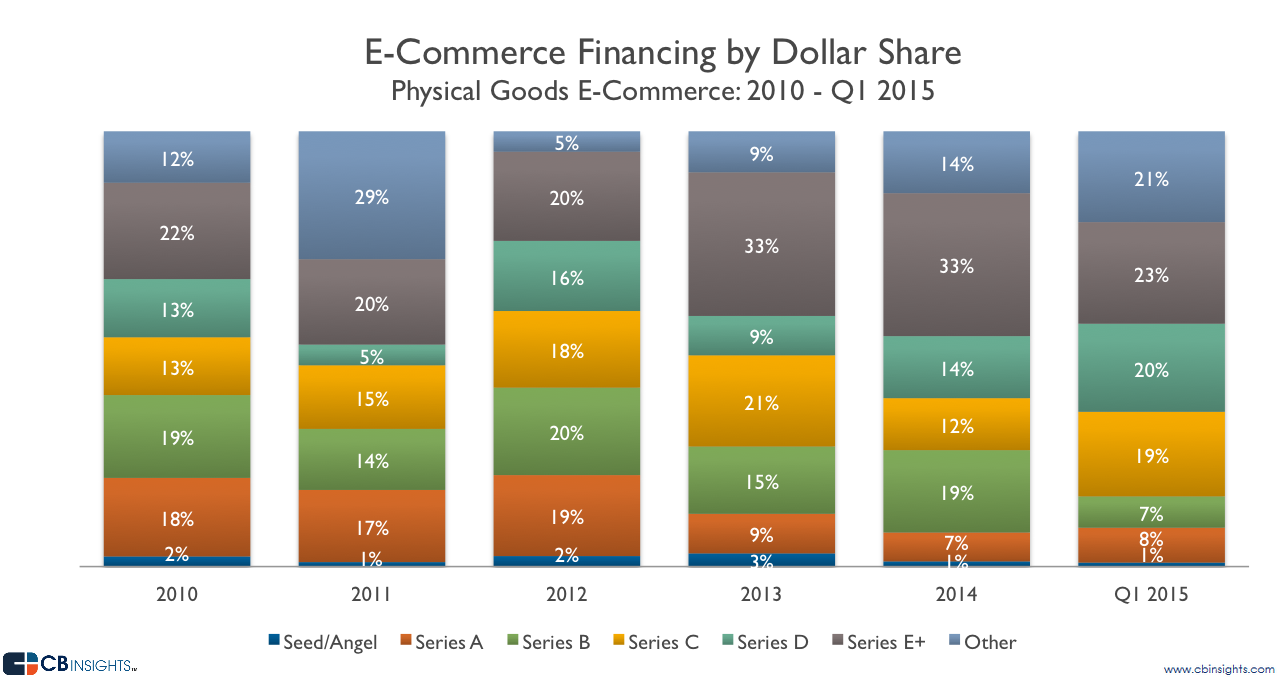 The list below gives the most well-funded companies from 2010 to 2015. The total funding for all the companies together is $10.1B. Flipkart, the top company in funding terms, received approximately $3B overall, from investors such as Morgan Stanley and Tiger Global Management. It is also interesting to note that 9 out of the 10 most well-funded companies are international, with 4 from China and 2 from India.

In the list below, we can see that 500 startups is the most active investor in e-commerce startups, with well over 50 total investments. The companies they have invested in include Tealet and Italist. Accel Partners and SV Angels come in second and third. Intel Capital is the most active corporate venture-capital investor in this space.

Additionally, 500 Startups was the leading early-stage investor, with all of its investments we analyzed being early stage. Google Ventures was the largest corporate venture-capital investor at the early stage, with more than 10 investments.

*Coupang raised a $1B funding round in June 2015. This deal was not included, as our analysis only covers the period through Q1’15.