Research Brief
1927
Five of the fastest-moving early-stage payments startups needed less than 250 days after their Seed rounds to raise Series A financing.

VC funding to payments companies passed $2B for the first time last year, more than double the amount the previous year. As startups and funding crowd into payments, it’s useful to know which companies are moving the fastest.

Overall, during the last four years, early-stage payments companies have actually begun to slow down. In 2011, payments startups took about 300 days to raise new funding after a Seed round. But they needed closer to 500 days in the first two quarters of 2015. For moving to a Series B round after raising Series A financing, the trend was similar: 300 days in 2011, and a median 550 days in the first half of 2015. 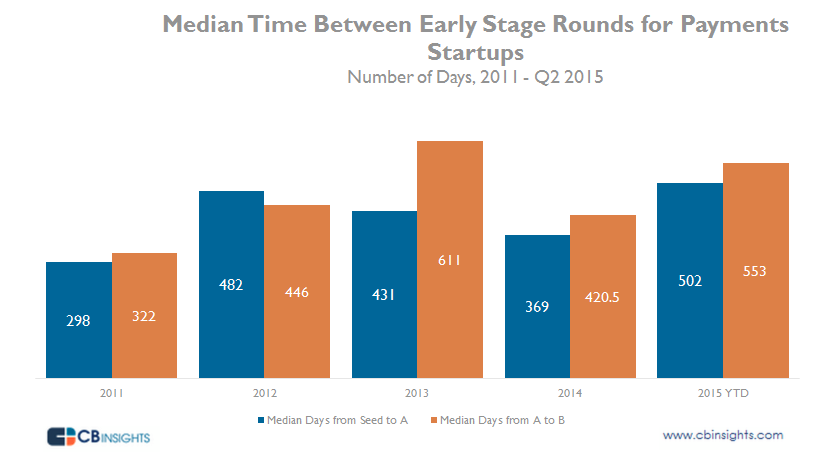 But some individual payments companies are moving very quickly. The 5 fastest-raising companies since 2014 all went from their final Seed funding to Series A in less than 250 days. Topping our fast-mover list is Singapore’s GoCoin, which enables merchants to accept cryptocurrencies cheaply and easily. GoCoin raised a $1.5M Series A round approximately 5 months after raising Seed funding. GoCoin was followed closely by UK-based Coin, which raised a $15.5M dollar Series A round from Spark Capital, Redpoint Ventures, and return backer SoftTech VC 160 days after its final seed round from YC, K9 Ventures, and SoftTech VC.

None of the top 5 fastest Series A raisers since 2014 were among the top 5 largest raisers.

We also looked at the startups that were fastest in moving between Series A and Series B since 2014. Our list of the top 5 is headed up by Adyen, one of the hottest startups in payments. Adyen went from Series A to B funding in just under 200 days during the second half of 2014. Another prominent name was Affirm, which raised a $275M Series B round less than a year after its $45M Series A funding from Nyva Partners, Lightspeed Venture Partners, and Khosla Ventures. Three of the fastest Series B raisers (Affirm, Mozido and Adyen) were among the 5 companies that have raised the largest Series B rounds since 2014.

Want more data on payments startups? Check out our venture capital database below.
If you aren’t already a client, sign up for a free trial to learn more about our platform.