Research Brief
1748
Internet and mobile, the tech sectors with the most exits, also produced the fastest exits.

Globally, tech exits were on the rise in 2014, but which sectors are producing the fastest and the biggest exits? We analyzed nearly 3,000 tech companies that exited between Q1’10 and Q1’15. We found the median time it took for those companies to be acquired or go public from their first funding, their median exit value, and the median amount they raise prior to exit.

Let’s start with exits. Hardware startups exited for the highest median amount compared to other sectors, at $224M (looking at exits with disclosed valuations). That’s in the neighborhood of 2x the valuation seen in the other principal sectors (2.2x mobile and internet). Electronics startups had the second-highest median exit amount, but it was nearly $100M less than hardware. Interestingly, internet and mobile took 19 of the top 20 exits. But at $100M or less their median exit amounts were the lowest among the five sectors — due to the long tail of smaller deals. Some of the largest hardware deals during this time period include the $2.7B+ IPO of Arista Networks and the IPOs of Fusion-IO and Nimble Storage which were both greater than $1.4B. 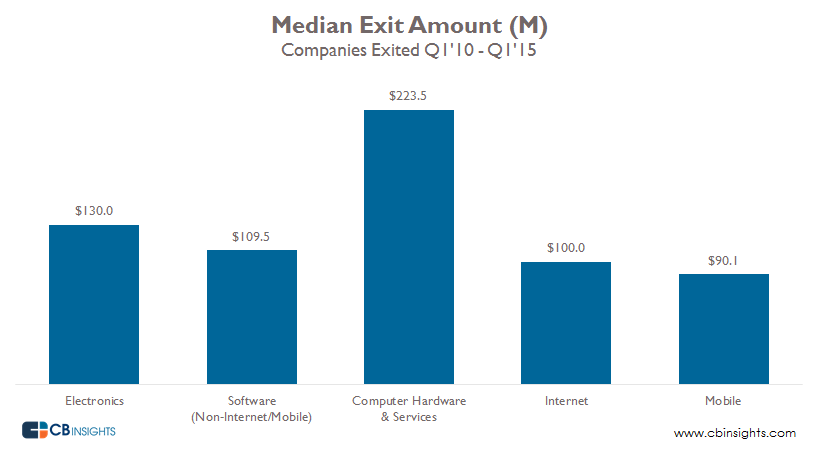 Looking at time-to-exit, electronics companies, including chip-makers and semiconductor companies, typically have the longest exit horizon at 6 years. Internet and mobile companies, which had the most exits during this time period (more than 2,200 between them) also enjoyed the shortest duration to exit, with both typically exiting in under 3.5 years. 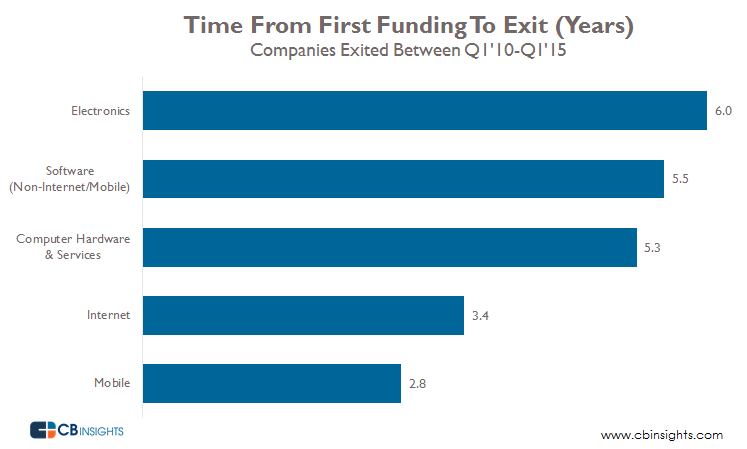 However, looking at median exit value and speed of exit doesn’t paint the entire picture. Another important measure is the amount of capital raised prior to exit. Electronics companies are raising a median of $31.2M prior to exit, and tend to raise 3 rounds of funding generally, a higher amount and more rounds than companies in any other tech sector. Companies in smaller, less capital-intensive industries like internet and mobile are often becoming acquisition targets and are raising less money before exit, usually under $7M. Though hardware and software companies take equally as long to exit from first funding, hardware companies tend to raise more ( around $5M more) than their software counterparts. Hardware’s median amount raised is also roughly 3x that of internet and mobile startups. 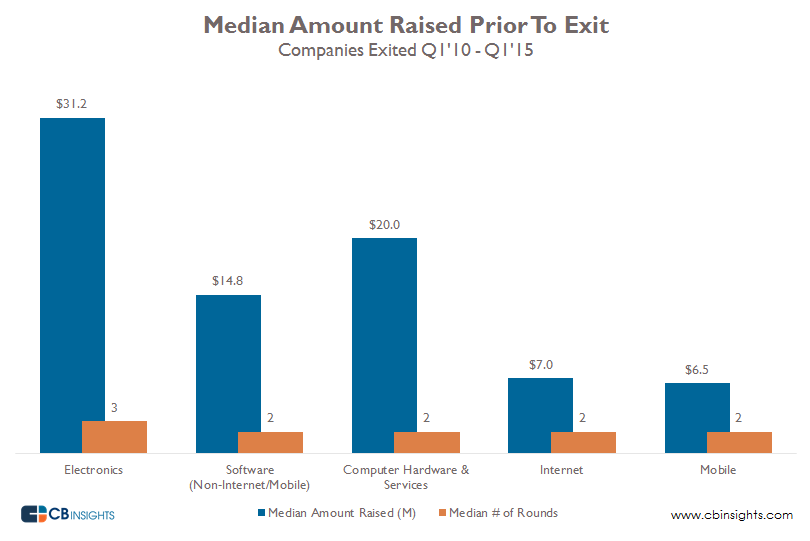 Want more data on private companies and exit trends? Sign up for our venture capital database below.